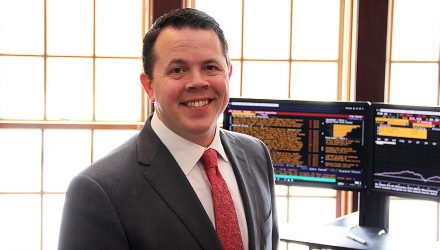 VettaFi writer Elle Caruso recently sat down with Ryan Issakainen, ETF strategist at First Trust, to discuss his thoughts on the current economic environment and how investors can best position their portfolios.

Caruso: What’s top of mind right now? What are you watching in markets, and how are you looking at the current economic environment?

Issakainen: I think what is top of mind for many investors and many of the financial professionals that we speak with is, first off, inflation, which I think everyone recognizes has become an issue that has to be dealt with. That’s such an important problem because it will likely lead the Fed to continue to embark on a fairly aggressive policy of rate increases. And we look at what’s being priced into the market now, and what’s being priced in is maybe a peak in the federal funds rate at some point maybe in the first quarter of 2023 — and then the market’s pricing in actually some rate cuts in the latter half of the year.

Our view is that the Fed is going to have to continue to raise rates because of inflation. The track record of the Fed and raising rates is they tend to continue to raise rates until something breaks, until they are able to slow down the economy, and I think that is likely what is going to happen this time as well. Our view is that inflation is a result of just an unprecedented surge in the M2 money supply, which reached levels that we had not seen before. The good news is that has dropped but it will still take time to work through the system, so we think that inflation is going to be around for a while.

I mentioned that the market’s pricing in that we’re probably going to see some rate cuts next year. I think that is because market participants expect a recession that will cause the Fed to start cutting rates — it is difficult to imagine that the Fed would start cutting rates as quickly as the market is pricing in, so our view is that we will probably see a recession sometime towards the end of next year or early 2024. We don’t necessarily think it’ll be a deep recession, but we will probably see a recession.

Caruso: For advisors who want to have a deep understanding of the current landscape and have informed conversations with their clients, what metrics and indicators are most important to keep an eye on?

Issakainen: I think one of the things that we would encourage people to pay attention to is, “What is the major driver of inflation?” because I think that is a really important issue. And that, in our view, is the M2 money supply, and our economics team has been forecasting high inflation long before most other groups, and that’s because we look at the money supply and we look at the impact that has historically had on inflation.

There are other indicators that are also important. There’s no single indicator that’s perfect, but a lot of people pay attention to the yield curve and whether it’s inverted. Right now, that two- to 10-year Treasury yield curve is inverted, so that’s something else that we would say is important to pay attention to. The one limitation to that in this current environment is that we look at that yield curve inversion as being an indication that the Fed is too tight, that they’ve raised rates too much, and I think, in the current environment, it’s difficult to make the argument that monetary policy is too tight, especially with the level of inflation that we have.

Caruso: The S&P 500 was up over 9% last month, marking its best month since November 2021. What happened? Is that run sustainable with all the current economic headwinds?

Issakainen: I wouldn’t expect to continue 9% per month run rate — that doesn’t seem sustainable; however, I do think that when you look at the decline in the longer end of the yield curve, the 10-year Treasury yield declined pretty significantly from its peak earlier in the summer. And I think when you think about the valuation of stocks, the discount rate in other words, a lot of that is based off of the 10-year Treasury yield. A lower discount rate means that you can justify higher valuations for stocks, and I think that has been a big part of what has driven stocks higher last month. Obviously, the other part of that is earnings reports coming in stronger than expected or perhaps better than feared, depending on your perspective.

The other part of it is valuations for certain segments of the market had just gotten to the point where they were relatively attractive, especially in comparison to the sort of relatively low yields that you’re still fighting in the bond market. Some of the concerns about taking too much interest rate risk in a rising rate environment. So all of those things together, I think, helped to fuel growth in equities last month.

I don’t expect that rate of rally off the bottom that we saw last month to continue, but I do think some of those gains may be sustainable. Especially if 10-year yields don’t ratchet higher than they were earlier in the summer, and our view is that we’ve probably put in at least the near-term top in 10-year yields, so I think that’s good news for equity investors.

Caruso: How should investors be positioned for both the short term and the long term?

Issakainen: We’ve got a fairly robust lineup of ETFs that investors and financial professionals can use to position various asset classes and segments of their portfolio. One of the areas that we’ve seen continued interest in, and I think makes sense in the current environment and heading into what could be a more challenging economic environment, would be in the equity side of things: ETFs that are more oriented towards quality and dividends. Investors can look to the First Trust Capital Strength ETF (FTCS) for the most exposure to the quality factor, and the First Trust Value Line Dividend Index Fund (FVD) and the First Trust Morningstar Dividend Leaders Index Fund (FDL) for dividends.

I think the energy sector, especially now that it has pulled back about 20% or so from its peak earlier this summer (Writer’s note: this conversation happened on August 9), I think that is creating a more attractive entry point for many investors that are still underweight or don’t have much exposure to energy stocks.

The sector underperformed for such a long stretch during the last decade that I think many investors had sort of given up on it. But when we look at the fundamentals of just traditional energy stocks, their valuations, their earnings growth, I think it’s a very attractive proposition. Even though we may be heading into a period of weaker economic growth, I think the market is pricing that in with single digit earnings multiples for the energy sector, and so I think even if we are headed into that sort of weaker economic environment, I think the energy sector should still do fairly well for investors. First Trust offers the First Trust Natural Gas ETF (FCG) and the First Trust Energy AlphaDEX Fund (FXN).

We like biotech because it is in the healthcare sector, which tends to be a bit more defensive and tends to have pretty decent pricing power. But I also think that there is a tremendous amount of innovation that is taking place in that space in the biotech space that will drive results for the next several years. I think the ability of biotech companies to harness and to utilize cutting-edge technology is enabling them to to solve very complex problems that will help to create new treatments and cures for diseases that were at the front edge of so I think, longer term. That is an important reason to be bullish on biotech. But I also think again, in the near term, valuations are relatively cheap when I look at sales or revenue multiples. They’re as cheap as they have been in a long time.

Over the last few weeks, we’ve seen an uptick in M&A activity, and I think that is something that has been a bit lacking. We haven’t seen a lot of mergers and acquisitions in the last year or so, and I think there’s a good case to be made that we’ll see an uptick over the next couple of years that will be an important driver of returns. First Trust’s biotech offering is the First Trust NYSE Arca Biotechnology Index Fund (FBT).

Commodities had a very nice run, great rally. They’ve pulled back some, and I think some investors are wondering, “Well, is this it?” My view is there is long-term secular demand for commodities that should cause investors to consider maintaining or adding exposure to commodities in the pullback. I think the fact that supply chains are being reoriented, especially if you’re planning on transitioning to renewable energy over the next couple of decades, there’s a tremendous amount of raw material demand that will come from that. So our ETF is the First Trust Global Tactical Commodity Strategy Fund (FTGC), a broad commodity ETF that is actively managed. It’s been around for about a decade.

I think as investors worry about fluctuating interest rates, rates are still relatively low, and you’re not being well compensated for taking a lot of interest rate risk or duration risk, so one of our most popular ETFs this year has been the First Trust Enhanced Short Maturity ETF (FTSM), which is our enhanced short maturity ETF, and it’s an ultra-short ETF. The good news with that fund is that a large percentage of its portfolio will mature in the near term; it’s designed to have a ladder where a large portion of the portfolio matures and we’re able to reinvest at higher rates. So as near-term rates increase, we’ve been able to reinvest in bonds at a prevailing rate that’s higher, and that has enabled FTSM to raise its interest payments six times since November.

The last area that I’ll mention, as investors are figuring out how to be positioned, is using buffered ETFs. That’s been one of our areas where we’ve seen the strongest growth this year. We call them our target outcome ETFs, but with buffered ETFs, investors are protecting some of their downside, and in exchange, they’re accepting a return that is capping some of their upside. But if you’re interested in perhaps diversifying the way that you’re managing risks… allocating to a buffered ETF has been an area that we think investors have been very well suited because you’re protecting some of that downside and you’re not assuming anything about the path of interest rates, you’re just utilizing the structure of a buffered fund. Our ETF that has grown to be one of our biggest is actually a fund of funds that incorporates several of those target outcome ETFs into its portfolio, it’s sort of a ladder approach throughout the course of the year. That’s the First Trust Cboe Vest Fund of Buffer ETFs (BUFR).