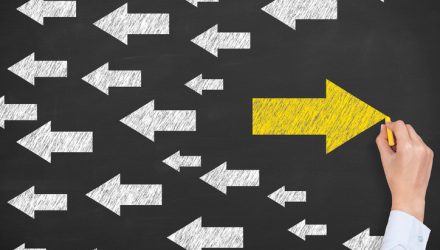 Market capitalization-weighted funds are known to lean toward the largest company stocks on the market, but Exponential ETFs is flipping the traditional role with a reverse cap-weighted ETF strategy.

“Portfolios that allocate weightings by market capitalization skew to the largest stocks. This leaves large sections of the market under-represented or not represented at all,” according to Exponential ETFs. “Reverse Cap weighting attempts to fill this gap.”

Unlike traditional market-cap weighted indices that places a greater emphasis on the largest companies in the space, this methodology will give a greater tilt toward the smaller companies. The strategy will bring the weighted average market capitalization of the index down from $162 billion to $16 billion.

“Market capitalization weighting exposes investors to a concentrated portfolio and an extreme bias toward mega-capitalization companies, which can result in returns being left on the table,” Exponential ETFs CEO Phil Bak said in a note. “With RVRS, we’re solving this problem and providing a tool for investors to balance out their exposure within their large cap U.S. allocation.”