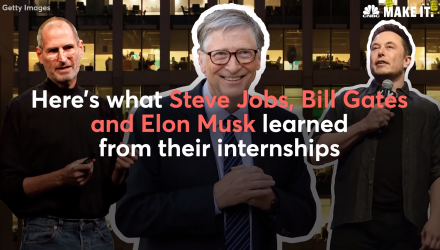 Internships can be critical in helping you decide the career path right for you early on in life — just ask Elon Musk, Steve Jobs, and Bill Gates.

Through work experience in a certain field, you can gain critical knowledge about what the job actually entails and if it’s meant for you.

Bill Gates: Not a Fan at Congress

As a teenager, Bill Gates spent a month of summer in 1972 delivering legislative documents to members of Congress and realized shortly thereafter that law and politics was not for him. Following that decision, Gates shifted his efforts into business, starting Micro-Soft (a combination of “micro-computer” and “software”) just three years later in 1975.

Steve Jobs secured his first job at 12 years of age when he called Bill Hewlett, co-founder of Hewlett-Packard, asking if he could have any spare parts to build a frequency counter. Not only did Hewlett provide Jobs the parts to do so, but he also gave him a job at HP that summer working on the assembly line. “Most people never pick up the phone and call, most people never ask. And that’s what separates sometimes the people who do things from the people who just dream about them,” Jobs said in an interview with the Silicon Valley Historical Association. “I’ve never found anyone who’s said no or hung up the phone when I called. I just asked.”

Jobs’ statement certainly holds true for Elon Musk’s early career. In 1994, Musk obtained his first internship by cold-calling a top executive at the Bank of Nova Scotia. At his internship, Musk observed a Yellow Pages sales rep stumble when making a pitch to sell an online and print listing, and immediately realized an opportunity. Shortly after, Musk and his younger brother Kimbal started an online directory similar to the Yellow Pages titled Zip2. Four years later in 1999, Compaq purchased Zip2 for $22 million