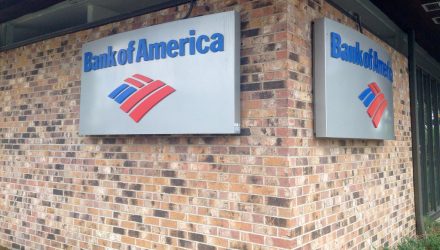 It’s been a rough ride thus far in 2018 for financials with the S&P 500 Financials Index down 3.51% year-to-date, but the sector was not to be denied a positive day in the early morning trading session as the index was up 1.15% while the Dow Jones Industrial Average was down about 13 points as of 11:00 a.m. Eastern Time.

Bank of America helped tow the financials into the green, handily beating analyst expectations in their second quarter earnings report release with $0.63 earnings per share versus the expected $0.57. Revenue was increased by 3% to $226 billion–$300 million more than estimates.

“Solid operating leverage and client activity drove earnings higher this quarter. Responsible growth continued to deliver as a driver for every area of the company,” said BofA CEO Brian Moynihan. “Consumer and commercial loans; we grew deposits; we grew assets within our Merrill Edge business; we generated more net new households in Merrill Lynch; and we supported more institutional client activity â€” all of this while we continued to invest in our businesses and began an additional $500 million technology investment, which we intend to spend over the next several quarters, due to the benefits we received from tax reform. Even while making investments in people, technology, new markets and real estate, we managed to lower expenses again this period.”