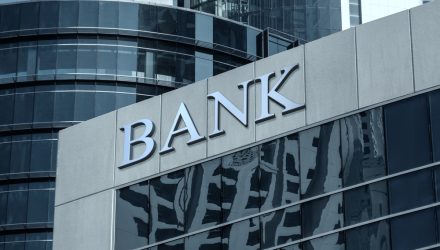 Bank stocks and financial sector-related exchange traded funds are finding it harder to slog through the growing fallout from the Russia-Ukraine war, surging inflationary pressures, and the Federal Reserve’s tightening monetary policy.

Banks are facing an uphill battle as they face increased risks of doing businesses with corporate and retail borrowers up against higher loan costs in a rising rate environment and surging costs with inflation at four-decade highs.

Meanwhile, the Russia-Ukraine war has thrown another wrench into the economic engine, adding to further risks and impediments to the global supply chain.

“The war, and its impact on price inflation, is a game changer,” Carsten Brzeski, an economist at Dutch bank ING, tells Reuters, adding that “consumers will take years to recover their spending power, lost to inflation. And companies will be hit as well”.

Banks are already exhibiting some weakness as a result of these ongoing hurdles. Bank balance sheets reveal that the capital cushions of JP Morgan, Barclays, HSBC, Morgan Stanley, Bank of America, Credit Suisse, and Citi all diminished over the first three months of 2022.

The end of a four-decade long bull run in the bond markets contributed to painful losses for many banks, while others are also seeing increased problem debts after pandemic lockdowns dealt a blow to global trade and shuttered thousands of businesses worldwide.

Consequently, some banks have shelved plans to buy back their stocks because of dwindling capital, despite their healthy investment banking profits that helped stabilize their businesses from the volatile financial markets.