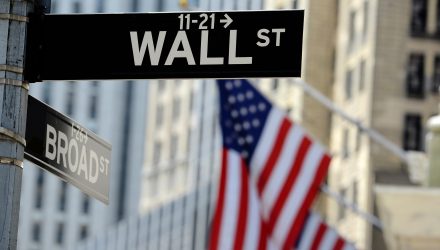 Financial stocks and sector-related exchange traded funds have underperformed early in 2017 but have recently been among the top performing areas of the U.S. equity market.

“In the current economic environment, there may be multiple tailwinds for this segment of the market,” Marc Chaikin, Founder of Chaikin Analytics, said in a recent note.

“A strong economy is likely to increase loan demand, higher interest rates will lead to a better net interest margin for banks, and other financial companies, and a lower regulatory and tax environment will boost earnings. A decade ago, many companies within the Financial sector were on the precipice of a collapse; 10 years later, the balance sheets look better than ever, and now could be the time to buy into the Financial sector,” he added.

Chaikin argued that the regulatory environment has become less restrictive since the Treasury Department is rolling back some onerous terms under the Dodd-Frank legislation and President Donald Trump’s nominations for several key regulatory positions are pro-growth and pro-business, so they will likely take a softer approach to interpreting rules.

“Less regulatory burden will give banks more latitude to use their capital more aggressively, possibly boosting earnings for banks and other financial institutions,” Chaikin said.

Meanwhile, the rising interest rate environment is also good for net interest margins for banks and more so for insurance companies. Given the latest strength in the U.S. employment data, many anticipate the Federal Reserve to hike rates at least three times this year. Yields on benchmark 10-year Treasuries have pushed above 2.80%, which is also keeping the yield curve upwardly sloping. Furthermore, with the ongoing economic strength, loan growth will also tick higher.