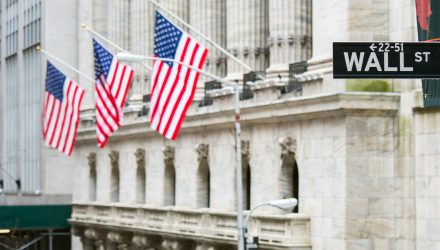 Financial stocks and sector-related ETFs are enjoying their moment in the sun as strong economic data and comments from the Federal Reserve on rate hikes helped bank stocks rally.

The Financial Select Sector SPDR (NYSEArca: XLF), the largest financial sector exchange traded fund, was up 1.0% Tuesday after a 2.6% jump Monday and is on track for its best two-day rise in over a year. XLF gained 17.0% year-to-date.

The comments come on the heels of Fed chair nominee Jerome Powell’s statement Tuesday that the case for a December rate hike was in play and hinted at lighter banking regulations ahead.

While Powell stated that the Dodd-Frank Act, passed in the wake of the devastating 2008 financial crisis, has made the financial system stronger, in other areas such as regulation of smaller banks, the law had imposed unnecessary burdens.