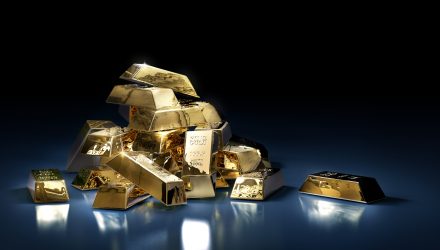 ETF investors who are worried about the ongoing risks in the market can look to gold-related exchange traded funds as a way to hedge against further uncertainty.

On the recent webcast, Stock Market Fears Shine a Light on Gold, Frank Holmes, CEO and Chief Investment Officer of U.S. Global Investors, highlighted two major trends that could support the gold outlook, including the “fear” trade and the “love” trade.

On the so-called love side, we are seeing increased demand from international buyers, notably emerging market consumers in the quickly growing China and India markets, which make up 40% of the world’s population. Holmes pointed out that based on GDP on purchasing power parity valuation, China’s economy is actually the biggest in the world at $25.2 trillion, compared to the U.S.’s GDP on purchasing power parity valuation of $20.4 trillion. The numbers reflect the growing middle class in China, which has a penchant for gold demand as a safety play and jewellery demand.

On the so-called fear side, we have witnessed government policy on both the monetary and fiscal side, such as interest rates, money supply, tax, regulations and spending, affect the outlook for gold prices. An overarching theme in recent months has been the trade wars as the U.S. and China make up 40% of global GDP. Meanwhile, with the economy slowing and the Federal Reserve easing up on interest rate hikes, more investors are warming up to gold for a safety play to hedge any further risks down the road.