You are at:Home»Equity ETFs»Falling Yields Chase Investors From a Financial Services ETF 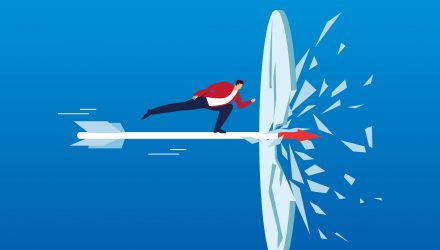 “Investors yanked $174 million from the iShares U.S. Financial Services ETF, or IYG, on June 19. That’s a record outflow for the fund which — with over 60 percent of its holdings in U.S. banks — has the largest exposure among broad financials ETFs. And volume was over $214 million, almost 15 times the average daily turnover in the past year,” reports Bloomberg.

Banks are usually positively correlated to higher Treasury yields because as those yields rise, banks can charge higher rates on loans.

“Mounting trade war concerns and declining Treasury yields this week have put pressure on bank stocks. The yield on 10-year Treasuries was as low as 2.88 percent Wednesday, the lowest since June 1, putting investors’ hopes for 3 percent on hold,” according to Bloomberg.