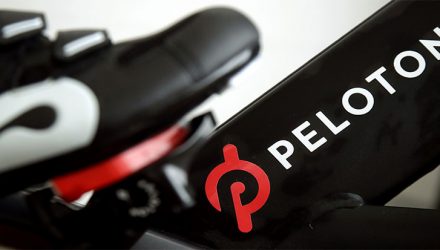 Peloton Interactive Inc. (PTON) was a stock market darling in 2020. Shares rose four-fold, as the company gave people a way to exercise and sort of socialize at the same time during the pandemic lockdowns. At its peak this January, Peloton’s valuation topped $45 billion, which seems more appropriate for a transformative business than a manufacturer of exercise bikes with an iPad stuck to them.

As it turns out, the exercise bike business is a little tough these days. Two Thursdays ago, Peloton Interactive Inc. reported less-than-stellar earnings and the stock dropped 30% in a day. Is this proof that the whole thing was just a fad?

Consider that a hypothetical manufacturer of plain-vanilla exercise bikes, without the computer stapled onto it, is a low-margin business. It probably has a valuation of $1 billion or so, and may not even be a public company. But once it becomes about technology, bringing together a community of people who exercise together, then it becomes something bigger in the public consciousness.

I have seen a number of investing fads come and go over the years. Remember the post-Sept. 11 security stock craze led by Taser International Inc.? For a time, Taser was the hottest stock out there. People were excited about the potential of a mostly non-lethal option in the law enforcement use-of-force continuum. But at the end of the day, it’s just a manufacturing business—there’s nothing special about it—and the bloom came off the rose. Its stock cratered in 2005, and it took a decade to recover and hit new highs. Today the company is known as Axon Enterprise, Inc. (AXON).

One fad playing out in real time is Beyond Meat, Inc. (BYND). Shares rocketed from $25 in May 2019 to $234.90 in less than three months. People had high hopes for Beyond Meat when it went public. The company allows vegans and vegetarians to eat meat substitutes without compromising their principles, and it provides an alternative to the emissions-intensive livestock industry.

But health concerns about processed food have taken over, and the market for plant-based meat is rapidly shrinking. People have now focused their attention on the next new thing, lab-grown meat. Beyond Meat recently reported dismal earnings, the stock went through a round of downgrades, and the shorts are circling once again.

I spend a great deal of time thinking about how to identify fads before they become mainstream. Being 47 years old and living in South Carolina, I am usually the caboose on the information train. The key is to invest in something the first time you hear about it. The first time you heard someone mention “fidget spinner” you probably paid it no notice. Or the second time. By the tenth time, everyone was talking about fidget spinners, the fad was nearing its peak, and the trade had run its course. There is nothing inherently wrong with investing fads, but they’re not buy-and-hold investments.

Even if you had perfect knowledge that Peloton was a fad stock, how on earth would you trade it if you found out about it in January? The idea of trying to short fad stocks makes me a bit ill. Even harder than trying to predict a trend is trying to predict the end of one. I suppose if you shorted CROX in 2007 and put it in the back book and didn’t look at it, a year later you could close out a winning trade. It’s never that easy. Investors made much more money in Peloton on the way up than on the way down.

What else out there is a fad? Are cryptocurrencies a fad? You might have been tempted to say that in 2016, but it’s looking less likely. Another stay-at-home stock, Zoom (ZM), seems to have a viable business, though even Zoom is down over 50% from the highs. But it’s a much more worthwhile use of your time to pick longs, rather than shorts.

The best way to identify a fad before it happens is to open your eyes and ears. Talk to people. What is new? What is hot? Invest, then investigate.

One last thing: I recorded the music from The Daily Dirtnap party I had in New York last week—crushed it. Here’s the link so you can check it out.