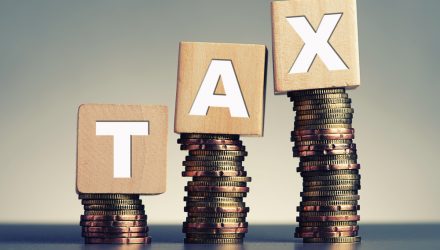 ETF Taxation In The Crosshairs

If you go back to the very first slide deck I ever put together on ETFs (from the late 1990s), you will discover two things:

While the first bullet abandoned me long ago, the second came under scrutiny recently, when a Friday afternoon drop from Senate Finance Committee Chair Ron Wyden (D-Ore) proposed eliminating the critical sentence in the Internal Revenue Code upon which the foundations of ETFs were originally poured.

Why Are ETFs Tax Efficient?

ETFs are tax-efficient–in the sense of not paying out capital gains to their investors–for several reasons.

But the big reason for ETFs’ tax efficiency is right in the heart of the ETF creation/redemption mechanism.

As a quick refresher: New ETF shares aren’t created for you when you hit “buy” in your Schwab account. Instead, you buy shares from the open market through the national limit order-book, the same as if you were to hit “buy” on TSLA shares.

If there’s so much demand that you make the ETF price become higher than what the fund is really worth, then certain market makers (called “authorized participants” or more commonly “APs”) can go to the ETF issuer and give them a basket of underlying holdings to create more shares of the ETF to sell to you. This process is known as an “in-kind exchange” — meaning, the shares are exchanged, not sold, between the AP and the issuer. APs do this because they can turn around and then book a small profit (we’re talking a penny or two) by selling the new shares to you for a tiny bit more than it cost them to make with the issuer.

If you hit sell, then the same thing happens in reverse: If you push the price of the ETF low enough, then the APs will buy up a whole lot of ETF shares and hand them back to the issuer, and in return, they’ll receive a basket of the underlying securities.

This creation/redemption process is the central nugget of almost everything golden in ETFs: transparency (the AP needs to know what to buy or what they’ll get back), liquidity (the APs make enough money to stay in the market providing that liquidity all day long), and, importantly, tax efficiency.

The tax efficiency comes into play because when the AP goes to the ETF issuer with a big block of ETF shares, the ETF issuer gets to decide exactly which shares of stock they hand back to the AP as part of the redemption.  And, because they’re not morons, issuers will hand back the shares on the lowest cost basis. As a result, every time there’s a redemption in-kind of an ETF, the tax basis of all the positions in the fund ratchets up a bit.  Do this enough times, and essentially the ETF ends up with no overhanging implied capital gains to speak of.

To be super clear, a traditional mutual fund can legally also do this exact same thing, but generally, they don’t because of the operational complexity. Instead, when folks want out, they present their shares directly to the mutual fund issuer (or more commonly through their brokerage account). The fund then has to sell something to raise the cash to pay out that redeeming investor. That sale generally has capital gains implications.

That means that the ETF redemption mechanism is not only tax-efficient (since the portfolio itself maintains a high-cost basis) but tax fair because you never receive a taxable capital gain for your holding because some other investor decides to unload. In other words, it’s entirely possible that you, as a mutual fund investor, to put $100,000 in a fund on Tuesday and receive a significant capital gain distribution on Wednesday. You’d also have to pay taxes this year on that distribution, even though you literally just showed up. While you do get to raise your tax basis every time this happens by the amount of your distribution, which is at least better than getting completely screwed, it’s still an accounting nightmare, and it removes any ability to really plan your taxes.

But with ETFs, you usually only get a capital gain when you personally choose to sell. (There are some exceptions, though, particularly for very actively managed ETFs or some fixed-maturity-window bond funds that distribute some gains once in a while, But it’s de minimis).

The reason ETFs are allowed to do this goes back all the way to a 1935 Supreme Court ruling that gave birth to the “General Utilities Doctrine,” which allowed corporations to just hand out securities to any shareholder for any reason with no gains (which was probably over-broad). It was repealed in 1986, but Registered Investment Companies (ETFs, Mutual Funds, CEFs) get a pass from a combination of two other pieces of regulation: Section 311(b) basically says, “you gotta pay taxes when someone hands you appreciated property,” but a different piece of the code, Section 852(b)6, gives RICs a pass on those rules — essentially allowing ETFs to do what ETFs do:

“Section 311(b) shall not apply to any distribution by a regulated investment company to which this part applies, if such distribution is in redemption of its stock upon the demand of the shareholder.”

Wyden’s proposal would remove this single line, which in turn would remove registered investment companies’ exemption to being taxed when they exchange appreciated property–like shares of a security.

As I see it, there are some pros and cons to this proposal:

Pro: Congratulations to you and your staff, Senator Wyden! You’ve figured out the shortest possible path towards killing ETFs’ tax-fairness advantage. In the annals of making regulatory changes, this is tight, short, and effective!

That’s it. That’s the pro.  Someone on your staff figured it out.

So the Senate Finance Committee’s proposal won’t actually generate very much revenue, causes massive chaos to the fastest-growing part of the non-crypto financial ecosystem, and is ultimately regressive, not progressive.  But other than that, Mrs. Lincoln, how was the play, I suppose.

Never Tell Me The Odds

A few important notes before anyone calls 911.  This is a discussion draft.  It’s not actually proposed legislation.

If we have a normal, rational rejiggering of the tax code, there would be an actual Office of Management and Budget (OMB) analysis of how much money might get raised and the actual implementation effects. In such an analysis, presumably, there would be a chance to explain all this to the Senate Finance Committee and show them how important ETFs have become not just to the financial ecosystem but to the actual lives of millions of individual investors.

I actually don’t think this will happen.  If I was a betting man?  More than 10:1 against.

Of course, I can’t remember the last time “normal” or “rational” applied to anything going on in Washington, though, so indeed, I am a little concerned.  This specific piece of the tax code — a single line — would be awfully easy to “slip through” somewhere in the budget reconciliation process.

As an advisor, however, there’s nothing for you to do here, really. Trying to predict specific changes in the tax code is even more pointless than predicting Fed moves. But if you’re at the edges of the industry?  Time to add “852(b)6” to your news filter.  I suspect there will be a chance to make comments if this moves forward.

For more stories like this, please visit the Expert Insights Channel.