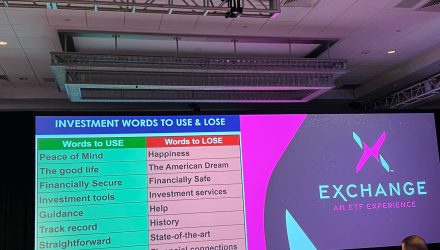 What You Could be Getting Wrong When You Talk to Clients

Of all the big-name guests at Exchange: An ETF Experience, only one so far walked out of their session trailed by a crowd of advisors — Frank Luntz. If you don’t know the name, you know his work. Luntz is a pollster whose work helped get presidents elected and created the buzzwords for issues we talk about every day. Ever wonder why we stopped saying global warming and started saying climate change? That was Luntz’s influence.

For Exchange, Luntz trained his lens on how we think about money and advice. His focus groups showed a major shift in the terms people want and need to hear to feel secure about their money. What he had to say won’t just help advisors prospect; it will help advisors hit the right notes with current clients to increase satisfaction to improve those relationships.

Here are some of the takeaways from Luntz’s talk without further ado.

Over half of Americans have re-thought their lives in some way in the last two years of disruption, leading to some big shifts. One of the biggest is that people are skeptical. “I wrote skeptical, but really it’s cynicism,” Luntz says. “It’s one of the reasons we’re so negative towards the economy: We don’t trust experts.”

This could create an environment for advisors to thrive if they frame their services carefully.

Luntz recapped a recent experience in his own financial life, where he set up an irrevocable trust and ended up signing paperwork for 15 minutes. That’s exactly the kind of experience that doesn’t breed confidence: You’re not reading anything, so it feels like you’re just putting blind trust in the fine print. “The less fine print, the better it can be,” he says.

Asking “What do you mean by that” doesn’t just go for clients. Consider this exchange where Luntz helped an advisor from Michigan figure out her own value proposition via a series of questions:

That third answer is the answer to question number one, and Luntz says you should use that with clients. Asking follow-up questions is critical to getting the real answers to your initial questions; The first few are often just surface-level probing.

What Clients Need To Hear

Sometimes, reframing how you say something makes all the difference in the world. For instance, Luntz noted the growing importance of accountability. Clients don’t need you to just listen to them. If that’s all you’re going to do, the impact of the action is still missing. This lack is part of that growing skepticism.

“I used to tell people it’s, ‘I hear you, I get it,’” Luntz says. “Now you need to add, ‘Let’s do it.’” That action creates accountability. Clients also need to hear you say, at some point in the first 30 minutes of consultation, “My first responsibility is ___.”

“When you offer genuine accountability, your clients will respond,” Luntz says. To execute that, you need to know what they’re expecting.

Luntz spent a lot of his talk inviting advisors to re-think commonly used terms. A trope like “hassle-free” tends to mean something different for everyone. Asking people to explain themselves further can help ensure you meet their expectations, which in turn help builds their trust.

Discussing investing instead of goals may feel like a big shift for many advisors. However, it’s an important element to being able to discuss investing correctly. For instance, when discussing what you offer with your firm, saying “investing tools” is more impactful than “investing services.”

“If you talk about investment services, you’re pitching to them. Selling them. It becomes about them if you use investment tools,” Luntz explains. Use language that focuses on the client and their needs and not about you.

Don’t Default To A Suit

Luntz then asked: What do advisors get wrong when talking to younger clients?

Despite Luntz previously discussing the importance of crypto, global exposure, and work/life balance when working with younger clients, none of those came up in his answer to this question. Instead, Luntz’s answer was simple: They overdress.

“Young people right now are more casual. Even those who are smart and understand what they want to achieve still don’t want to be lectured to by someone in a suit and tie,” Luntz says. “I would try to dress a step above the person I’m pitching or talking to. If they’re in a polo shirt, wear a button-down. If they’re in a T-shirt, wear a polo.”

It would be impossible to pack everything from Luntz’s session into one article, but hopefully, the takeaways and images here give you a sense of what he conveyed on stage at Exchange.