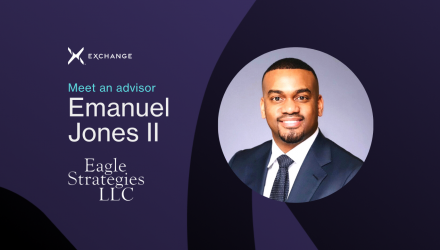 Exchange is coming February 5–8, so Evan Harp is talking with some of the advisors who will be there. Today’s edition is focused on Emanuel D. Jones of Eagle Strategies LLC.

Evan Harp: When and how did your practice begin?

Emanuel Jones: Sure. So my practice began in 2020. Right at the height of the pandemic, right after I decided that, I was working in a family business has some insurance experience, but I pretty much took a break from that.

Me and my partner had a real estate investment firm and 2020 hit us hard, not financially so much, but more so emotionally. I was thinking about what I want to do moving forward. I wanted something that’s going to be impactful. I wanted something that was going to really touch a lot of people and help a lot of people, and I was thinking about needs and things of that nature. Then also my background, being an MBA in a finance major at Emory University, there’s a lot that I knew that a lot of my colleagues, even though they were making great money, didn’t particularly know. Honestly, now that I look back on it, there’s a lot I didn’t know now that I’ve learned since I started my firm. So that really inspired me to take my experiences — like, I want to build a wealth management firm. That’s very impactful to this up-and-coming generation, touching people who have that income or who are making money or making strides to better their family’s life and ingrain that longevity in that estate planning and that generational wealth within their community or within their household. So, it’s just very impactful work when it comes down to being a financial expert. There’s a lot of misinformation out there. A lot of people who claim to be experts who have never taken a single financial exam, but have done a lot of YouTubing and Googling. I strive to be a voice of accurate reason, that can back it up with not only the degrees, but then also the exams and the testing and the certifications necessary to talk about this.

Evan Harp: What is your investment philosophy?

Emanuel Jones: Investing is drastically different for every single different client. Even though you may have some with similar goals, they might not have similar risk tolerances, or they might be in a different type of industry. So, you have entrepreneurs, who would invest differently than someone who has a corporate job, and things of that nature.

My firm strives to look at each and every person as an individual, find out exactly what makes you comfortable and really just talk about your history with investing, how you felt like you got burned in the past, or how you felt like you achieved success in the past, and then take that into a holistic strategy that can be steadily getting perpetuated outside of a 401K.

A lot of people don’t have steady investment accounts. When they’re starting out, building wealth, the majority of America does not; it is really the top 10% who probably even have remotely that. But there’s still things that can be set up where you can get diversification, where you can get risk tolerance or risk mitigation, and you’re investing where you can basically expand your portfolio tenfold without taking crazy outside risks that a lot of people do.

I just try to meet people where they are understand their philosophy that they came in, and then help them unlearn a lot of the bad habits and try to ingrain some good ones in them, based off where they’re trying to go, how old they are, what their goals are: family, kids, all that good stuff. It all plays a part into our holistic view and attempts to get people to grow their wealth.

Evan Harp: What was the biggest obstacle you had to overcome and how did you do it?

Emanuel Jones: I will say the biggest obstacle that I had to overcome, that I am still overcoming, is within my community in particular, the African American community, there is so much misinformation and distrust when it comes to financial institutions that has been ingrained for generations.

It has been, far and large, the biggest obstacle to gaining that trust, having a competent approach to ‘AIright, let me explain financial markets now,’ not the way your grandmother understood it, not the way your aunts or your parents even understood it; the way it goes right now, so that you can make wise decisions. So many of my peers, so many of my clients, so many people are the first generation making over a certain amount. It’s not abnormal for a millennial to be making more money than their parents. It is pretty commonplace, especially if they went to college, saw their parents work tooth and nail, they’re like, “Okay, yeah, I’m going to do extra hard, I’m going to do extra better.”

So really just unlearning a lot of bad habits is the biggest challenge and requires a lot of patience. You can’t just go in and say, “Hey, this is the plan, this is where you need to go, and you just listen to me.” You have to really explain the nuts and bolts and explain in a way for them to understand. So, it’s a constant practice thing. Every single day, I feel like I’d get a little bit better at it.

I also learn from when I missed a client, where the client disengaged, because maybe I was just talking too much about this instead of that. Or maybe it was at this level, but it needed to be at that level.

Not saying anything about intelligence, but people only have so much they can actually spend on trying to understand something they’re not living on a daily basis. I think I’m getting very good at trying to explain that, and even if they don’t end up working with me, I hope that anybody I interact with will, at least, think more intelligently about this industry and their personal finances — even pursue it with somebody else. That will be — that will be just fine with me. As long as you do something, if I can stir up some action in you, then I’m great. But if I just talk to you, and you’re like, “I’m saving my money in a mattress, this is crazy,” then I failed completely. That’s been the challenge, and the push and the kind of drive, of what my firm is about.

Evan Harp: Exchange is slated for February 5–8. What do you think the biggest story in the market will be at that time?

Emanuel Jones: February? So we’re talking about in the January, W2s — taxes. It is going to be taxes.

February is the start of people thinking about taxes. Like, having that in the back of their mind, “I need to file my taxes,” is always going to be the most popular topic right then.

Then we have a changing administration. We got we’re going to have some fiscal policies that I feel like we’re going to be rolling out, especially at the top of the year, that will affect every American and also some of the wealthy. So, it’s going to be a lot of shaking up, and now that midterms are done, we’re going to be looking forward to the next couple of years here leading into the election cycle. Not only that, but then that’s going to also be starting the steam roll of the presidential election coming up in a year and a half. [Laughs] Fun stuff, fun stuff! That will definitely be on top of the agenda right there.

And then, of course, I’ve got to mention it cryptocurrency. Cryptocurrency is going to be on everybody’s tongue and in everybody’s ears for probably the next couple of years. You have some crypto believers, you have some crypto deniers, it is almost cultish when you really think about it, but, honestly, my personal views when it comes down to it is I think we’re going to really focus on a lot of regulation around that industry to protect investors on the financial side. That has to happen. We haven’t seen anything like this since the Great Depression, and that’s when a lot of fiscal policies came in protecting the everyday investor. That’s when you came out with accredited investors, certain thresholds to have certain risky assets — we have to do something, because I’m reading all types of articles about how teachers’ pensions are losing, you know, $90 billion of their pension because of risky, outside the scope investments that people were signing off on. We cannot allow that. We cannot allow people to take risks with everyday Americans’ money when they can’t afford that risk. But the people who run the funds can, that’s the problem. So, that is going to be top of mind, at least on my mind. You got to protect Americans from excitable investments with not much credence.

Evan Harp: Who is another financial advisor that inspires you and why?

Emanuel Jones: There is a financial advisor, his name is Broderick Young. He and I spoke when I first started my firm. He went a similar route that I did, but has many more years’ experience than I do.

He’s based in DC, similar markets to mine. And he’s built his own firm called We Reveal Wealth, or Reveal Wealth. He has a few people working for him, and really affects our community a lot. He’s very, very knowledgeable about so many aspects of the financial industry. He has more initials behind his name, I don’t think it fits on a business card — It’s one of those types of advisors.

That’s the way that I’ve seen him portray himself. He’s an adviser that I really look up to, even from a distance. I don’t even talk to him very often. I see his name pop up in so many different things and it’s motivation to keep growing and keep building even when it becomes a lot. And I appreciate you asking me that because now I was just tired today. I got to get to work.