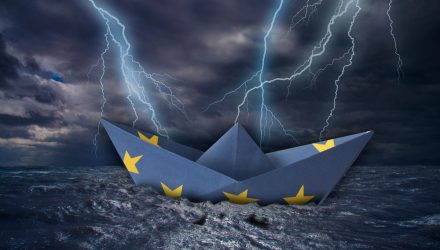 Europe exchange traded funds have been under pressure this year, and the immediate future prospects don’t look all that promising.

Investor morale in the Eurozone is now at its lowest level in almost two years as of April, hinting at a potential recession for the Euro bloc in the quarter ahead, Reuters reports.

The Sentix’s index for the Eurozone, a comprehensive poll of German investors about their opinion of the markets, fell to -18.0 in April from -7.0 in the previous month, touching its lowest level since July 2020. The sentiment index’s decline was much worse than Reuters’ poll, which had pointed to a reading of -9.2.

The dip in March’s investor morale was largely expected due to the start of the war in Ukraine and the associated uncertainty. The strong fall in sentiment for April comes as the war extends and Western countries eye additional sanctions against Russia, fueling further uncertainty.

Sentix warned that the ongoing Russia-Ukraine war and sanctions, along with additional uncertainties, could drag the Eurozone economy toward a recession.

“Investors do not expect that the central bank can rush to the rescue with a more relaxed, more expansive monetary policy because of the still considerable pace of inflation growth,” Sentix told Reuters.

While sentiment was dropping globally, Sentix highlighted the more severe decline for the Eurozone, saying, “No region is able to resist the negative momentum at the moment, even the important Asian region is already fighting stagnation.”