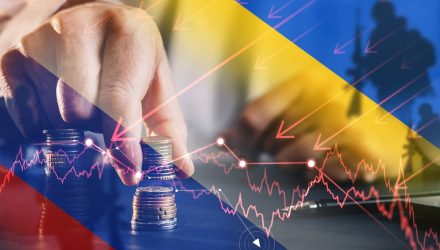 While European banks may not be overly exposed to Russia, Europe’s financial sector and related exchange traded fund took the biggest hit from the recent selling pressure in response to the Russia-Ukraine war and following Western sanctions.

Analysts argued that the lack of visibility over what’s to come in the ongoing conflict, such as a surge in energy prices that could drag down Europe’s economy, along with unknown indirect exposures, contributes to an ultra-wary outlook for European lenders, the Wall Street Journal reports.

“It is a bit like the beginning of the Covid-19 crisis. No one has a clue of what will happen next,” Jérôme Legras, head of research at Axiom Alternative Investments, told the WSJ.

Since the start of the Russia-Ukraine conflict, the Euro Stoxx banking sub-index has declined by roughly one-quarter, with the greater falloff in France’s Société Générale SA, Italy’s Unicredit Spa, and Austria’s Raiffeisen Bank International AG, all of which have operations in Russia.

However, the Russia exposure only represents a small part of profits at Société Générale and Unicredit. On the other hand, Raiffeisen is in a more precarious position since it generates 40% of its profits from Russia and Ukraine.

Analysts, though, argued that the lender, which is relatively small, is more insulated from the worst-case scenario since it is part of a network of banks under the same name in Austria that would help cushion any fallout.

Moody’s Ratings anticipated some trading losses to be expected among global banks that have entered derivatives and other transactions with Russian and Ukrainian banks, with most of their collateral lost.

“The full extent of wider, indirect fallout from the military conflict and associated international economic and financial sanctions cannot yet be fully assessed, as their scope will continue to evolve,” Moody’s said.