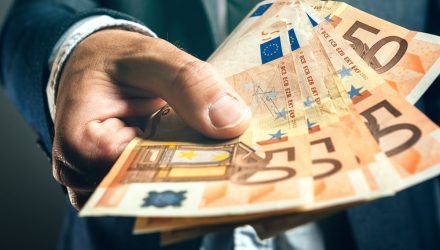 For much of this year, the CurrencyShares Euro Currency Trust (NYSEArca: FXE), which tracks the euro’s price movements against the dollar, has been a star among currency exchange traded funds. However, the bull thesis on the common currency is suddenly looking vulnerable.

Over the past week, the CurrencyShares Euro Currency Trust is lower by about 2% and some currency traders believe the euro is poised to see more near-term downside. FXE is still higher by about 11% year-to-date.

“The common currency hit an almost six-week low versus the dollar on Wednesday. While the day’s move may owe more to greenback strength than regional concerns, it follows losses in the wake of the German election and sets the euro up for its first losing month since February,” reports Bloomberg.

The PowerShares DB U.S. Dollar Index Bullish Fund (NYSEArca: UUP), the tracking exchange traded fund for the U.S. Dollar Index, is up 1.7% over the past week. UUP tracks the price movement of the U.S. dollar against a basket of currencies, including the euro, Japanese yen, British pound, Canadian dollar, Swedish krona and Swiss franc.

Perhaps sensing that the dollar is oversold and that the euro is due to pullback, traders have allocated nearly $29 million in new assets to UUP over the past month, according to PowerShares data.