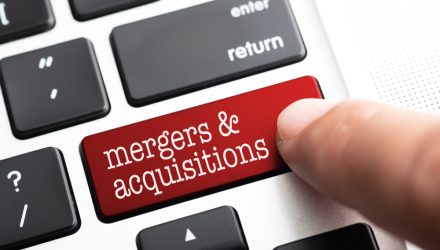 As global merger and acquisitions activity picks up this year on the low interest rate environment and rising stock prices, investors can look to M&A-themed exchange traded funds to capture the increased deal-making.

According to Refinitiv data, the total value of pending and completed deals announced in 2021 has already hit $3.6 trillion year to date, or more than the full-year total of $3.59 trillion for 2020, Reuters reports. So far this year, 35,128 deals have been announced, 24% more year over year.

“The M&A momentum points to a fundamentally strong market looking ahead. This pace of dealmaking could continue for the next 18-24 months, with new financing solutions and sectors driving activity,” Andrea Guerzoni, global vice chair at Ernst & Young, told Reuters. “The strong demand from private equity and the rebound in SPAC acquisitions …. should support a robust deal pipeline in the near to mid-term.”

The United States alone made up $2.14 trillion worth of M&A deals for 2021 so far, while Europe and the Asia-Pacific accounted for $657 billion and $620 billion in new deals, respectively.

“You as a seller are facing the fact that if you wait until the new tax legislation is passed, and if it does pass in the manner in which it is being presented now, you are taking a ~20% hit on your net transaction value,” Barbieri told Reuters.

As a way to tap into the merger arbitrage strategy, investors can look to the IQ Merger Arbitrage ETF (NYSEArca: MNA), which employs a type of alternative, “directional hedge fund strategy” called merger arbitrage, where the fund tries to capture the spread between a stock’s trading price before a deal is announced and its eventual takeover price.

A merger arbitrage strategy may also help improve portfolio diversification. Merger arbitrage returns have not historically been materially influenced by the broader equity and fixed income markets, as demonstrated by its low correlation to broad market indexes.