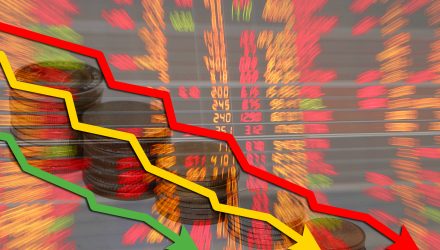 Recent data from Morningstar indicate June 2018 was the worst month for equity fund flows, including mutual funds and exchange traded funds, since August 2015.

“Overall, long-term U.S. open-end funds and ETFs had their greatest outflows since August 2015 of approximately $22.1 billion,” said Morningstar. “The bulk of these outflows stemmed from U.S. equity, which saw $20.8 billion of outflows—$17.1 billion from active funds and $3.7 billion on the passive side.”

International equity funds, including emerging market funds, were hit hard by outflows last month as investors grew pensive about the specter of a full-blown trade war between the U.S. and China. For example, the iShares MSCI Emerging Markets ETF (NYSEArca: EEM) saw June outflows of $5.35 billion, more than any other ETF.

“International-equity funds suffered the most outflows since 2008 with $9.8 billion in outflows, which was due largely to emerging-market outflows,” said Morningstar.

One of the areas investors favored last month was short-term bonds. Funds such as the Vanguard Short Term Bond (NYSEArca: BSV) added new assets. The Vanguard Short-Term Bond fund tries to track the performance of a a market-weighted bond index that covers investment-grade bonds with a dollar-weighted average maturity of 1 to 5 years.