You are at:Home»Alternative ETFs»ETF Tracking Euro’s Movements Against Dollar Can Keep Rising 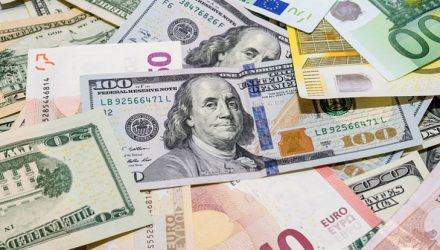 The CurrencyShares Euro Currency Trust (NYSEArca:FXE), which tracks the euro’s price movements against the dollar, is one of this year’s best-performing developed market currency exchange traded funds. Aided by some comments from European Central Bank (ECB) President Mario Draghi, FXE jumped 2.6% last week, bringing its year-to-date gain to over 8%.

Other economic data points indicate the euro could continue higher against the dollar, the latter of which is lagging in spite of the Federal Reserve hiking interest rates twice this year.

“New orders are often viewed as leading indicators of the overall PMI index and the spread between these two series is often indicative of the direction of the USD/EUR, with a lead of about 10 months. German new orders outpacing US new orders by the widest margin since 2007 suggests plenty of runway for the euro to rally against the USD,” reports ETF Daily News.