You are at:Home»ETF Strategist Channel»Why You Want to Reconsider Investing in Japan 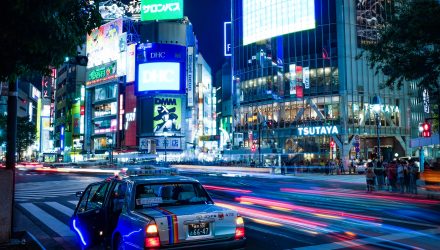 Why You Want to Reconsider Investing in Japan

Our recent trip to Japan illustrated once again why occasionally portfolio managers need to step away from the economic data and the research reports and actually visit the countries in which we invest. We have visited Japan several times over the past seven years and have never witnessed the level of economic activity that we saw in our recent visit.

There is an energy and a dynamism in Japan right now that simply is not well captured by traditional economic statistics. This increased activity is reflected in the construction cranes dotting the Tokyo skyline, jam packed bars and restaurants and a steady stream of initial public offerings bringing young, entrepreneurial Japanese companies to market.

The disconnect between the excitement happening on the ground in the Japanese economy and the far more sedate economic data can perhaps be best explained by the unique demographic drivers that are powering the Japanese economy. For example, Prime Minister Abe has tried to break the deflationary mindset of Japanese consumers by setting a 3% target for wage growth, but actual wage gains have consistently fallen well short of this target.

Japan’s aging work force accounts for some of the disappointment in wage gains, as high wage workers retire and are replaced by younger, lower cost workers. However, we believe that two of Abe’s most successful economic policies have also depressed nominal wage growth, even as these policies have helped fuel the increased dynamism visible in the Japanese economy.

The Abe administration has sought to counter a falling population by encouraging women to reenter the workforce. This policy has been extremely successful, and Japan’s 70% female workforce participation rate is among the highest in the world.

This means that more Japanese households benefit from two paychecks instead of one, with a corresponding increase in household spending power. Unfortunately, women in Japan (like women all over the world) suffer from a pay gap relative to their male counterparts. As workforce participation rises for lower paid women, the wage gains for the Japanese economy as a whole are depressed even as the financial wellbeing of Japanese households improves.

Another uniquely Japanese labor market dynamic is the move from part-time to fulltime employment. Over the past 20 years, Japanese companies reacted to the stagnant Japanese economy by relying on part-time workers. Despite the name, these workers typically work at fulltime positions but do not receive the benefits and protection from layoffs offered to traditional, fulltime employees.