You are at:Home»ETF Strategist Channel»Why Investors Should Rethink Fixed Income 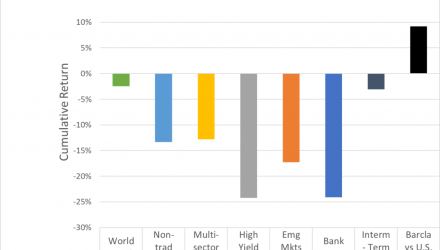 Why Investors Should Rethink Fixed Income

Investors have been accustomed to very low yields for the past decade.

The last time the Federal Reserve implemented a program increasing rates was June 2006, over a decade ago. The period of loose monetary policy following the Global Financial Crisis was one of the longest and steepest in history.

The Federal Reserve started cutting the Federal Funds Rate on September 18th, 2007 and didn’t start raising rates again until December 16th, 2015. One-month T-Bill yields were close to zero following the Lehman Brothers collapse in September 2008 and ten-year Treasury bond yields were mostly in the 2%-3% range for the last decade.

With rising rates and talk of a flat or inverted yield curve, it will be helpful to revisit the impact these environments have on yields and investors’ plans for consistent, reliable income.

With yields at rock-bottom levels since the Global Financial Crisis, bonds have been failing to deliver the income many investors need.

This has forced many advisors and investors to take on more risk in high-yield bonds or other riskier investments to satisfy living expenses. While this may fit the bill in the short term, it is an unstable and unsustainable long-term income plan.

With investment grade rates barely keeping pace with inflation, investors have been “chasing yield” wherever it might be found…high yield bonds, emerging market debt, world bond funds, bank loan funds, “non-traditional” and “multi-sector” bond funds, et cetera. The graph below shows a cumulative estimated flow of almost half a trillion dollars into these “spread” asset classes over the last ten years. 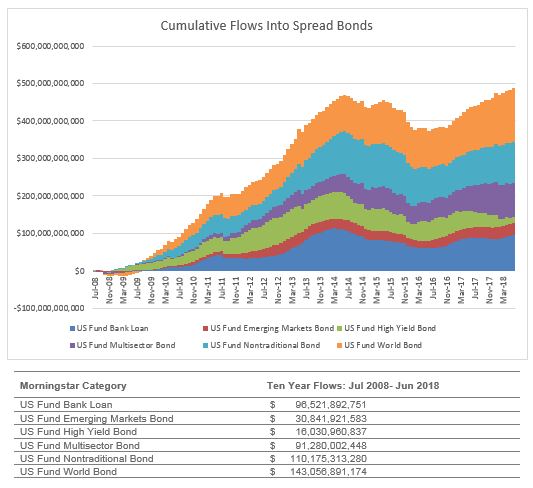 Pursuit for high-yield bonds is all well and good when fixed income markets are calm. But let’s not forget the other reason investors include bonds in their portfolios: capital preservation. The moment equities sell off, these types of investments will have a hard time keeping the portfolio steady.

The Consequences of Chasing Yield

Prior to the Global Financial Crisis, yield had been low and suppressed for quite some time following the Dot-Com Crisis. With yields low and markets benign during the middle part of the 2000s, many investors dialed up their risk exposure to chase after yield. When markets reversed, they paid the price.

During the Global Financial Crisis, these spread asset classes typically lost between 15% and 25% of their value, shown below. 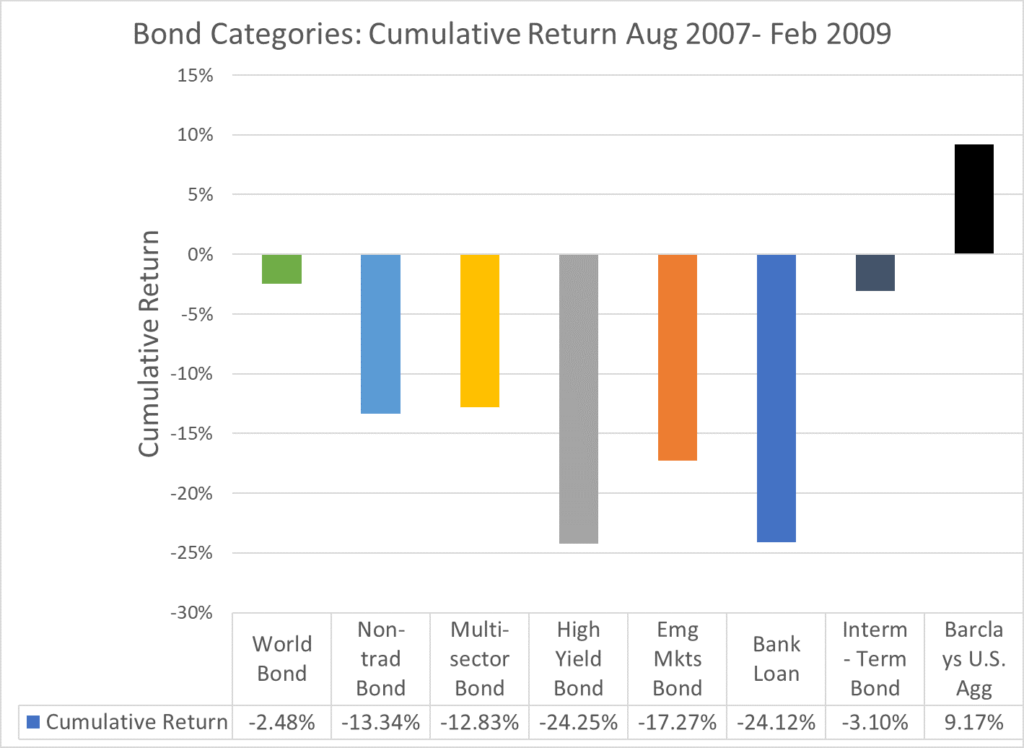