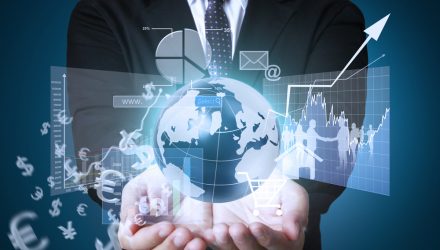 New Frontier Advisors August 2, 2022
In spite of high inflation, political gridlock and persistent supply chain issues, the US continues to see strong performance relative to other international markets. In this article, we attempt to elucidate why international exposures should still be part of an optimized portfolio, how international and emerging markets differ in make-up from US markets, and how factors such as the strong dollar and recent geopolitical developments have reshaped outlooks on the future.

Question 1: U.S. stocks have outperformed international and emerging markets over the past 5 years. Do international equities still have a role in a core portfolio?

Correlations between U.S. and international markets have been high in recent memory, but may reduce if deglobalization continues.

Question 2: What’s driving the differences between the U.S. and international stock markets?

Thoroughly evaluating and investing in global sources of return entails careful examination of markets (both developed and emerging) for the diverse sector exposures and other unique characteristics the different economies offer. Much of the spectacular growth of the U.S. market in recent years is due to the technology sector, which is relatively larger than in most other markets. While technology also figures heavily in the Chinese market, of late there has been little growth in China’s technology sector due to regulatory headwinds. Other, commodity-driven economies such as Canada and Australia have also seen positive returns corresponding to the boom in commodity prices.

Much of the outperformance of the U.S. market can be attributed to the technology sector.

Question 3: How do international stocks and bonds benefit the risk and return of a core portfolio?

One current limitation on the ability of international exposures to enhance portfolio efficiency is in fixed income markets. From our perspective, international opportunities are largely confined to equity markets at present since the currency exposure of fixed income presents exchange rate risks without an expectation of greater return. Furthermore, bond yields are not generally higher outside the U.S., and the U.S. is generally considered to have the least default risk. The exception is emerging markets debt, with its higher yield. In equities, though, international investing continues to offer both the ability to implement proper diversification to minimize portfolio risk at each level of expected return, and the opportunity to capture and lock in higher returns – both of which are lacking in a solely domestic investment approach.

The US has been consistently one of the highest yielding bond markets among developed economies.

Question 4: Will the US dollar continue to strengthen, or will its strength lead to entrenched global inflation, negatively affecting future international returns?

The strength of the dollar also has an effect on future international returns. Recently, the dollar strengthened due partly to its role as both the global reserve currency and a safe haven for investors in tumultuous times. It also became more attractive because U.S. Treasurys provide higher interest rates than most developed economies, and because expectations are that rates will move even higher. The appreciation of the dollar also has the effect of masking international equity market returns—recent U.S. and international market returns, often quoted in terms of the U.S. dollar, have been similar in dollar terms, but international markets have outperformed in local currency. In other words, the strength of the dollar has hidden the local outperformance of many international markets. The dollar’s impact on the economy also has an effect on markets. A strong dollar is good for consumers but a drag for producers competing internationally. This undermines the current objective of the Fed to slow the economy, which could force more aggressive action and thus eventually lead to a weaker dollar.

The relative return of international and U.S. markets in local terms has mirrored the rise of the dollar in 2022.

Question 5: With both equity and fixed income markets experiencing negative returns in 2022, what, if any, opportunities are there in international markets?

Moving beyond the current performance of international asset classes to focus on a long-term view of international markets, we find that outlooks are now less certain due to recent geopolitical developments. Geopolitical risks generally make outlooks less reliable, but Europe and China deserve special consideration. European valuations were already relatively low at the beginning of 2022, but the invasion of Ukraine had a clear deleterious effect. This further reduced asset prices and increased volatility, which suggests a potential return premium for investors willing to accept the risk of investing in the region. In contrast, China’s reinforcement of regulatory policies on corporations to prioritize social responsibilities over shareholders casts further doubt on expectations that it will reward investors as its economy grows. 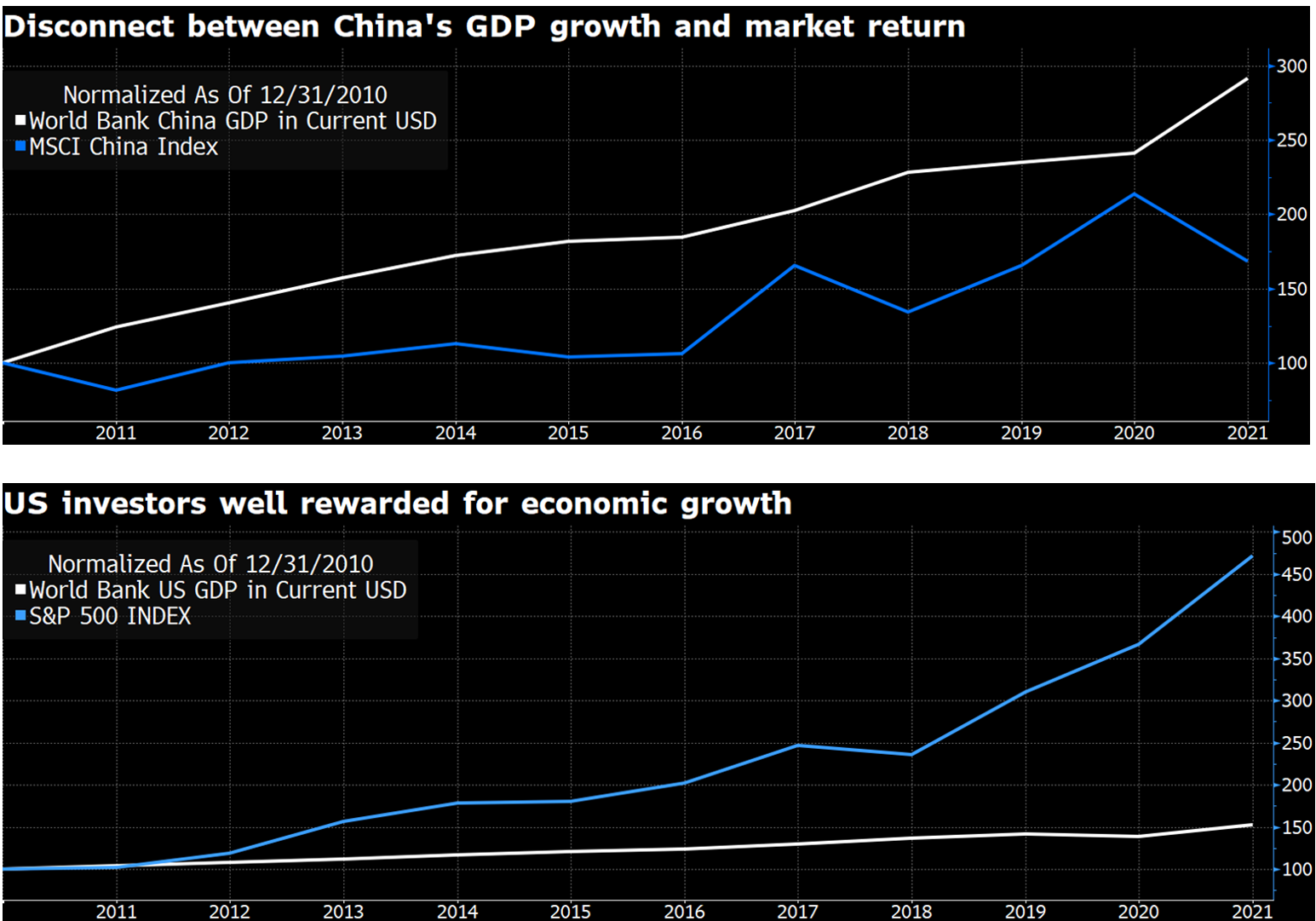 Unlike the U.S., China’s spectacular economic growth has not translated into commensurate returns to equity investors.

Overall, investors can expect more dispersion than usual among international markets, which presents an opportunity for international investing to lower risk and enhance return. But it is as important as ever to be diversified against uncertainty and to avoid being too exposed to any specific possible outcome of the events currently unfolding. Fundamentally, global diversification improves an investor’s chances for capital preservation due to lower geographical concentration, as well as alternate sector exposures. For the long-term investor whose main goal is capital appreciation, the higher risk premia currently associated with international markets such as Europe present an opportunity. For the risk-averse investor willing to sacrifice potential appreciation for greater certainty of preserving capital, the right amount of diversification across markets will tend to smooth out the drawdowns as underperformance in one place is balanced out by outperformance elsewhere.

Past performance does not guarantee future results. As market conditions fluctuate, the investment return and principal value of any investment will change. Diversification may not protect against market risk. There are risks involved with investing, including possible loss of principal. The indices are not investable securities. Any investable security would have performance reduced by fees and expenses. Any distribution must comply with your firm’s guidelines and applicable rules and regulations, including Rule 206(4)-1 under the Investment Advisers Act of 1940.

market risk. There are risks involved with investing, including possible loss of principal. The indices arenot investable securities. Any investable security would have performance reduced by fees and expenses. Any distribution must comply with your firm’s guidelines and applicable rules and regulations, including Rule 206(4)-1 under the Investment Advisers Act of 1940.