You are at:Home»ETF Strategist Channel»Who Should We Blame for Inflation: The Fed, Biden, or Putin? 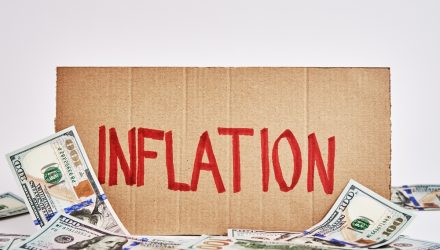 Who Should We Blame for Inflation: The Fed, Biden, or Putin?

The inflation that we are experiencing is mainly a result of U.S. Federal Reserve (Fed) policies that have been too loose for too long and remain overly accommodative in our view. While the war in Ukraine does not help the global economic situation and is a humanitarian tragedy, inflationary pressures were building for months prior to Russia’s invasion. Broader supply chain disruptions have also been a challenge; however, we see signs that these problems are easing even with high inflation. For example, U.S. automobile production has recovered to the highest level in more than a year while used car prices are no longer adding to the inflationary environment.

The primary cause of inflation is the massive amount of fiscal stimulus that was enhanced, instead of being offset, by loose Fed policy. The American Rescue Plan Act, which was enacted in March 2021, was far bigger and clumsier than required. Enacting a $1.9 trillion stimulus package after the U.S. economy had already begun to strengthen was both unnecessary and unwise.

At the time, joblessness had fallen sharply, and job openings were increasing, which makes the need for such a large package questionable. Coincidentally, March 2021 was the month when the number of open jobs in the U.S. surpassed the number of unemployed individuals looking for fulltime work. A year later in March 2022, there were approximately 4.8 million unemployed Americans looking for fulltime work while there were 11.5 million job openings. 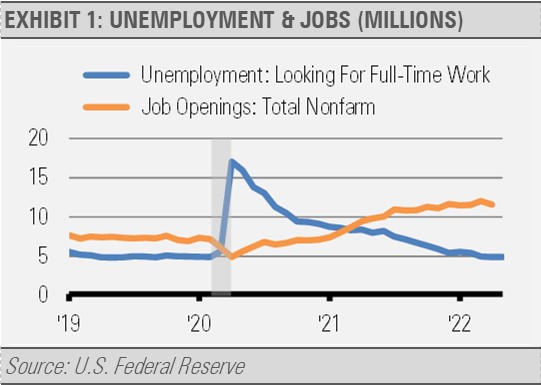 Larry Summers, the former U.S. Treasury Secretary during the Obama administration, suggested at the time that the American Rescue Plan Act legislation included fiscal spending at a level of roughly three times the estimated gap between economic potential and the actual size of the U.S. economy (Easley, 2021).

As the graph below illustrates, the gap between the actual size of the economy and the Congressional Budget Office’s estimate of economic potential shrank from more than $2 trillion at the height of the crisis in the second quarter of 2020 to just over $600 billion in the first quarter of 2021 when the $1.9 trillion legislation was enacted. Adding so much fiscal stimulus at a time when the gap between actual and potential output was rapidly shrinking would result in increasing inflationary pressure. 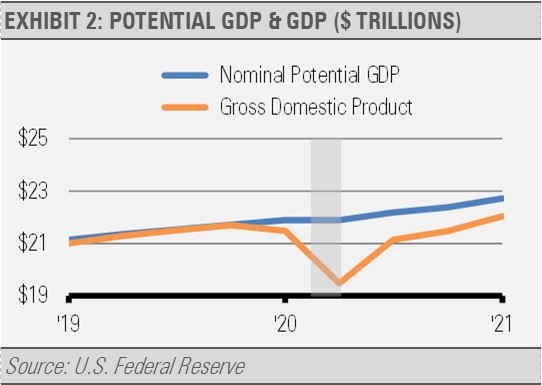 As Summers pointed out, the probable inflationary risks from the legislation could be mitigated if the Fed responded quickly with monetary policy tightening, spending cuts from the government, and increased taxes. Clearly, none of that occurred and, as Summers correctly suggested, high inflation is the result.

Since inflation is usually a monetary phenomenon vis-a-vis too much money chasing too few goods, and monetary policy is the Fed’s responsibility, the Fed is ultimately at fault for our breakout inflation.

The Fed’s support during the liquidity shock was necessary and wise, as were the first rounds of fiscal support. Rather than continuing to inject more money into the economy via bond purchases for a year after the $1.9 trillion fiscal expansion, the Fed should have been raising rates and conducting quantitative tightening to offset the inflationary impulse of trillions of dollars chasing too few goods. In fact, inflationary pressures were already increasing prior to March 2021 as the following graph illustrates by comparing actual Personal Consumption Expenditures (PCE) inflation to the Fed’s 2% target. Inflation was building in 2021, a year before Putin and Russia invaded Ukraine. 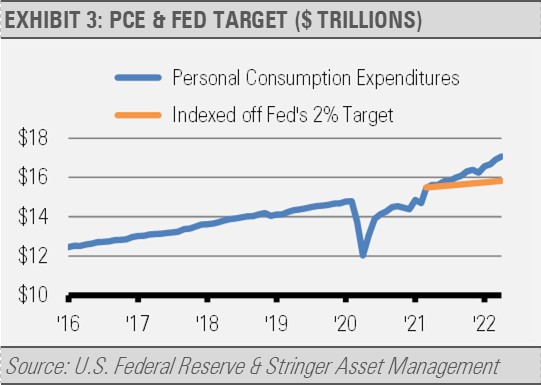 So, it was ultimately a failure of U.S. Federal Reserve policy that has caused the current price inflation as only the Fed controls the money supply.