What is a “Bear Market”

A “bear market” is traditionally defined as a peak-to-trough decline in value of -20% or more.  Based on that definition, the only way you can tell that a bear market exists, is after it has already happened.

At this date, most of the major US equity indexes have not dropped by the arbitrary -20% measure that traditionally defines a bear market.  Through Friday’s close, the S&P 500 was off about-12% from its high, which would be 8% short of the “bear market” threshold.

Here is something to think about. Since most markets have not yet dropped by -20%, then does that mean that we are NOT in a “bear market?”

I can remember back in March of 2020. One news anchor stated something along the lines of this: “If the market falls another one quarter of a percent, we will officially be in a bear market.”  In other words, once the S&P 500 blew past the -20% marker, did that mean that we were in a conventional wisdom “bear market?”  The answer is “no.”  The markets became highly inefficient because emotional short-term sellers swamped buyers. The many sellers caused a very sharp decline. We call such an action a “trading anomaly.”  There were no buyers to purchase the wave of emotional sellers.  The net result was that the madness of crowds came face to face with the law of supply and demand. The pandemic caused a knee-jerk emotional reaction from investors, which we call a “trading anomaly.”  On the other hand, bear markets last longer and can take months or even years to resolve themselves.

Bear markets have high volatility which is the result of a breakdown in the normal low or random correlations that typically exist in a diversified portfolio of securities. Instead, securities begin to move together causing a loss in the benefit of diversification which in turn, causes an increase in portfolio volatility.  Volatility shows itself in a cluster of “outlier” days, which Canterbury defines as a trading day beyond +/-1.50%.

Next, I will show some examples of typical bear market behavior. Two good examples of bear markets include the technology crash of the early 2000s and the 2008 financial crisis.  These two charts can be found below.  On each chart, I have labeled the similar characteristics that are shared between them: 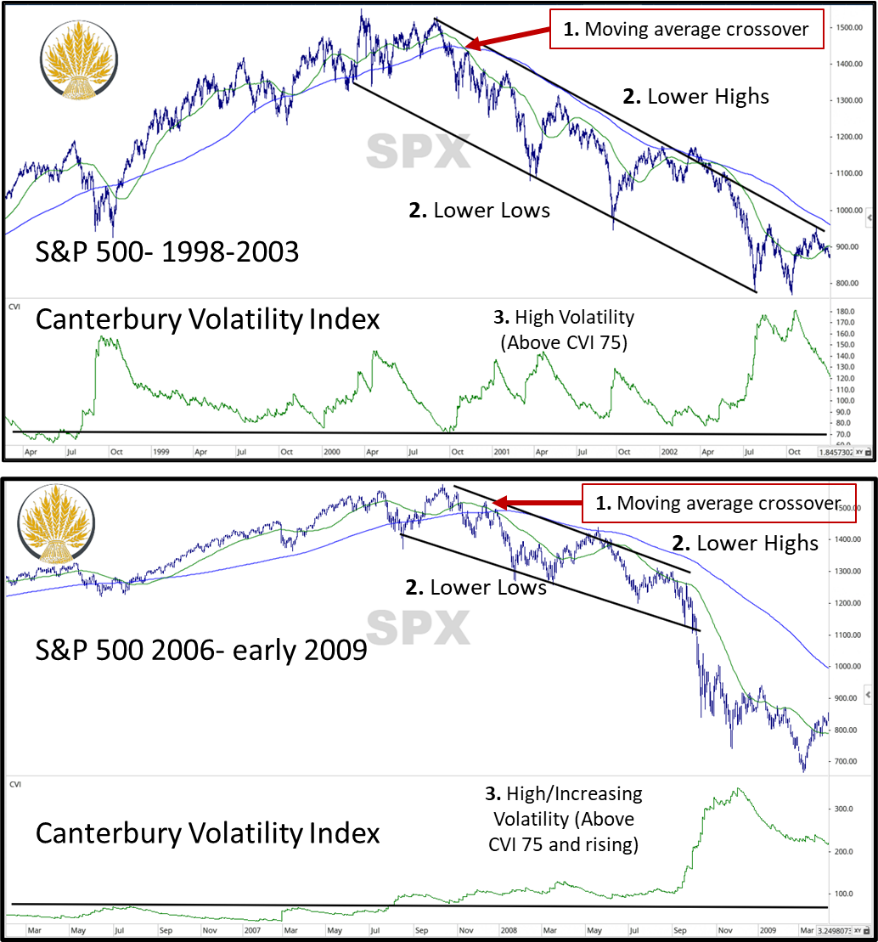 Observations Regarding the Current Market Environment:

So, now that we have established a few bear market basics, let’s look at the market today, with some statistics. 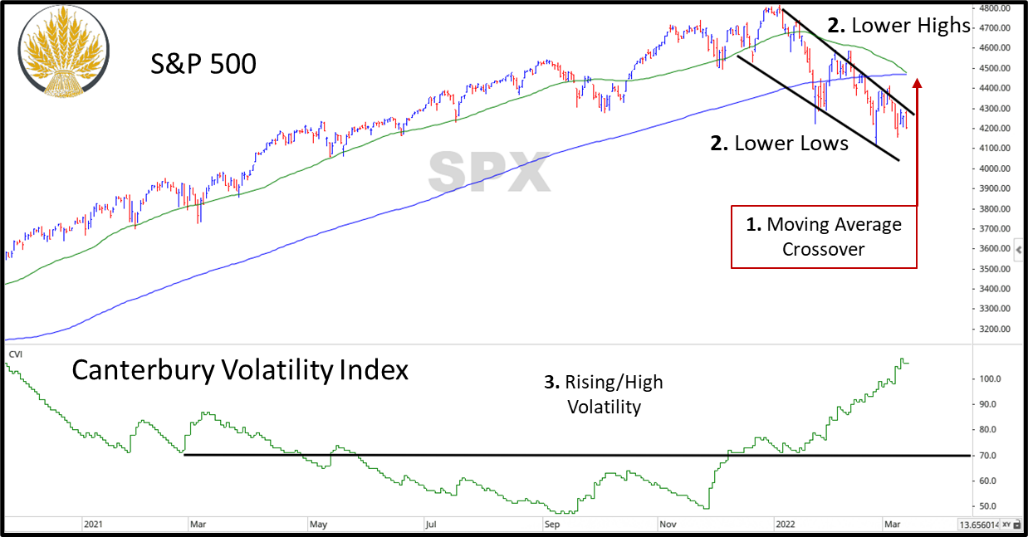 The charts above are just showing large cap S&P 500 index, which happens to be off by more than -12% from its peak.  What has not been discussed is that the Nasdaq Index is off by -21% from its peak, the Emerging Markets index is down -27% from its peak, the EAFE is down -16%, and 20-year treasury bonds are off by -25% from their high back in August of 2020.  When you look at the Russell 3000 index, which represents the majority of US stocks both large and small, 52% of stocks are off by at least -20% from their respective high, and 26% are off by -40% or more.  So, while things have looked grim for the S&P 500, other indexes have seen much worse already.

Are we entering a bear market?

According to Canterbury’s Market State ratings, we have been in a bear market for more than half of this year. We know this even though we have not experienced an arbitrary -20% decline in the S&P 500. The markets have been volatile. Be aware that bear markets are counterintuitive.  In other words, the markets will do whatever they need to, in order to confuse the masses.  You will often see sharp bear market rallies, followed by another large decline. Many times, the rally will be led by the former weakest market segments. Make no mistake, we are in a high-risk environment.

Fortunately, this is the type of market where an Adaptive Portfolio Strategy benefits the most.  There are areas of this market that have not had the same negative impact as others, such as commodities, Consumer Staples, and the energy sector. We also use inverse securities that move in the opposite direction of its underlying index. Inverse funds are great tools for risk management during volatile periods. An adaptive portfolio will use whatever combination of securities necessary to produce and maintain the most efficient, low volatility, portfolio that matches the existing market environment, bull or bear.