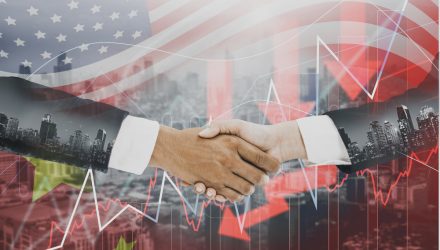 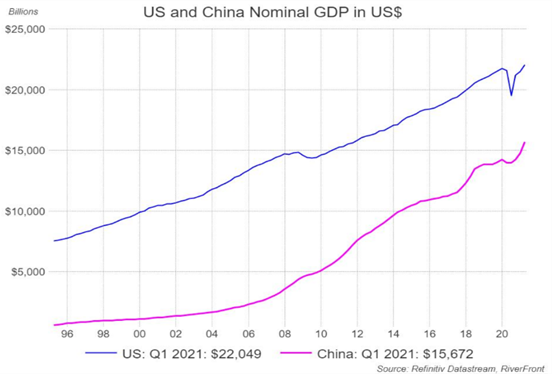 Several weeks ago, we reached out to our sales team to find out questions they were receiving from Financial Advisors that they wanted us to answer in our Weekly View. There were several questions that we have addressed recently and then there was one that stood out above the rest: The rise of China and the potential diminishing influence of the US. Thus, we will highlight why we believe the US remains the world’s preeminent economic superpower in terms of productivity, currency, and center of influence. 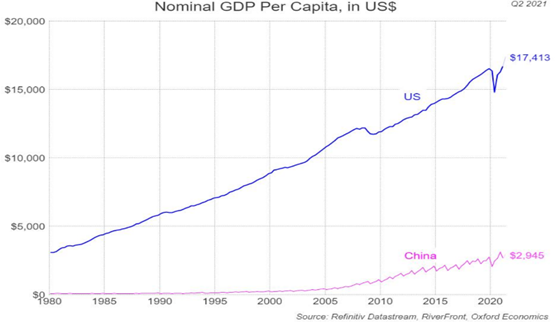 The United States has enjoyed its status as the world’s superpower since the fall of the Soviet Union in 1991. However, some would argue that the title is in jeopardy with the meteoric rise of China over the last 20 years. Since joining the World Trade Organization (WTO) on December 11, 2001, China’s nominal GDP (Gross Domestic Product) has grown from approximately $1.3 trillion to $15.67 trillion at the end of first quarter this year. Comparatively, the US’s nominal GDP has grown from approximately $10.6 trillion to $22.04 trillion over the period. The gap has been closed largely due to China being a low-cost exporter for years. Now other countries are taking over that role as China attempts to move up the value chain and become more consumption-focused domestically. In our opinion, given the large population difference between China (1.4 billion) and the US (332.3 million) it is not a question of if China’s nominal GDP will pass the US’s but rather a matter of when this will occur. However, we submit that economic supremacy is about more than just the size of nominal GDP. We believe that other factors must be considered, such as nominal GDP per capita, to get a sense of which economy is more productive, along with which country’s currency is used more for global trade. 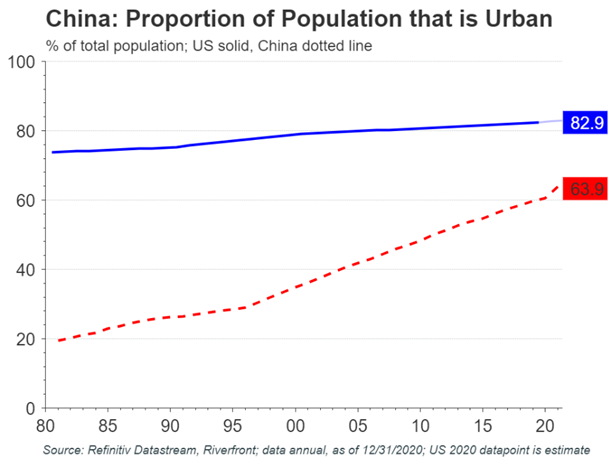 Shown for illustrative purposes. Not indicative of RiverFront portfolio performance.

While China has the upper hand on growing nominal GDP due to its population being approximately 4.2 times that of the US, there are some cracks in the foundation when inspected closely. As highlighted in the chart above, even though China’s economy is the second largest in the world behind the US it is far behind the developed world economies of the US, Japan, UK, and Eurozone on a per capita (per citizen) basis. Nominal GDP per capita helps economists measure a country’s prosperity because it focuses on the output per citizen. By this measure, China is far from an economic superpower relative to the US, as the US is nearly 6 times more productive per citizen. China has made strides getting its citizens to move from rural areas to cities, but a lot more needs to be done and thus highlights the problem China faces in the race to be an economic superpower. China must educate its population and continue to urbanize to increase productivity per capita, in our opinion. China has made great strides in urbanization since it opened to the West in the late 1970s; however, China’s urban population is still roughly 15 points below the US currently (see chart right). For comparison, China’s urban percentage now sits close to where the US did in 1950 (source: University of Michigan Center for Sustainable Systems). 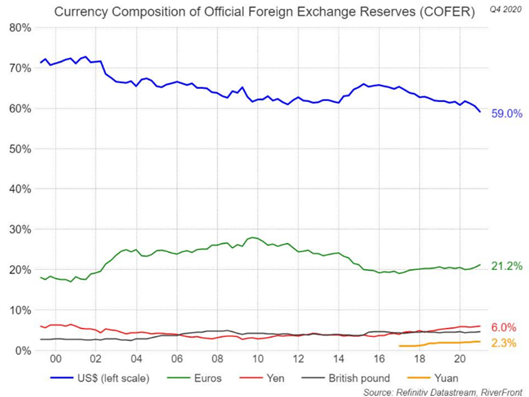 Another important indicator of a country becoming an economic superpower is measured by the adoption of its currency for global trade. The US has enjoyed having the dollar hold the title of the ‘reserve currency of the world’ since the Bretton Woods Agreement in 1944. Some have argued that the US’s rising government debt load could compromise the dollar’s status. However, compared to other global currencies it is still much more widely held in official foreign exchange reserves at the world’s central banks. For example, the US still commands 59% of all global reserves, while the yuan only has roughly 2.3% (see chart right). Granted the dollar is less widely held today than 20 years ago but it is still well ahead of China’s yuan that only accounts for roughly 2.3% of global reserves. In addition, the opacity of the Chinese economy and artificial management of the yuan by Chinese authorities tends to diminish the potential usefulness of the yuan as a global reserve currency, in our opinion.

China’s “Belt and Road Initiative” (BRI), an attempt by the government to widen Chinese influence via joint venture infrastructure projects in foreign countries, has been met with suspicion and controversy since its launch in 2013. In our opinion, BRI has had little impact on the yuan’s adoption outside of China’s borders. China’s center of influence remains strong in Asia but as the US attempts to regain a more influential position globally, we expect more drama between the opposing sides. After witnessing China’s heavy-handed tactics against democracy in Hong Kong, there is now a tug-of-war between the US and China over the influence of Taiwan. While the US has become more inwardly focused over the last decade, recently it has engaged with its allies to re-establish its center of influence in Europe and Asia.

Despite the mounting debt load of the US and the rise of China, the US remains the preeminent global economic superpower, in our opinion. Ultimately, the US may not end up with the largest economy, but we believe it will remain the most productive for the foreseeable future. Thus, we continue to see opportunity by investing in domestic stocks and remain overweight US companies which we believe have the wherewithal to find efficiencies to drive higher profitability.

To review other risks and more information about RiverFront, please visit the website at www.riverfrontig.com and the Form ADV, Part 2A. Copyright ©2021 RiverFront Investment Group. All Rights Reserved. ID 1651572