You are at:Home»ETF Strategist Channel»Unicorns Exist Only When Money Is Free 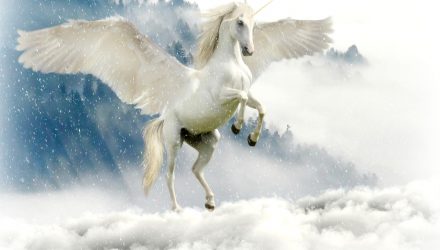 Unicorns Exist Only When Money Is Free

A unicorn is a privately held startup company valued at over $1 billion. The term was coined in 2013 by venture capitalist Aileen Lee, choosing the mythical animal to represent the statistical rarity of such successful ventures. – Wikipedia

It is debatable how much the Fed’s former zero interest rate policy (ZIRP) stimulated the overall economy. However, we believe that the “unicorn” investing phenomena has been a direct result of the policy. When the cost of capital is basically free (as was the unstated goal of ZIRP), investors become more willing to invest in companies with little or negative cash flow that offer no indication of certain profitability.

Investment time horizons shorten when interest rate increase, and unicorns have accordingly started to come under pressure as the Fed tightens monetary policy and cost of financing begins to increase. The need for near-term positive return-on-investment generally goes up as hurdle rates increase and as the potential return of other less risky investments increases.

One “visionary” recently described this issue as “boring”. He apparently doesn’t realize that his company’s vision has been financed by nearly un-ending free money. Investors aren’t asking boring questions. Rather, they are concerned about potential returns and cash flow when interest rates increase. They are merely signaling that promises about the future are devalued when interest rates rise and the cost of capital increases.

Let’s all go to Mars!

When I began on Wall Street in the early-1980s, the Fed raised interest rates dramatically to fight inflation. The Fed wanted to set an exceptionally high “risk free” hurdle rate that could stymie overall economic activity. It worked perhaps too well (the economy experienced a “double-dip” recession), but the Fed did indeed end the inflation spiral.

A risk-free rate of 15% curtails activity for two reasons. First, investors shunned equities because money market funds were returning roughly 20%. Many investors felt no need to invest for any conceivable investment time horizon when short-term riskless paper was yielding 20%. In turn, companies’ hurdle rates, or minimal acceptable return for capital investment, was also prohibitively high. Companies could not find projects in which to invest that returned more than 20%.

When the Fed instituted ZIRP investors eventually realized money was free, and no investment seemed unworthy or too long. Wild promises of future growth seemed to trump the attractiveness of rational traditional investment projects, which is an effect the Fed probably never anticipated. For example, there are now four companies that have plans to provide transportation to Mars, yet commuters in the New York/New Jersey can’t arrive at Penn Station on time. Exactly as financial theory suggests, ZIRP and a zero-hurdle rate has led investors to irrational decision-making.