Trump or Biden…We Will Play the Hand We’re Dealt: Part 1

We believe uncertainty can invoke negative reactions. Some people may take uncertainty in stride, but for others it can be unsettling. This has been a year of collective emotional swings, and November’s elections are about to take center-stage. Twenty years ago, in November 2000, I was scheduled to speak to a group of investors the day after the Bush-Gore election. Depending on the election outcome, I was prepared with a report with the respective party symbols at the top of each, detailing the strategy we believed optimal for that outcome. That was my ‘risk management’ plan because I had both scenarios covered, right? Wrong. Most of us remember that 2000 was the year of the ‘hanging chad’ and the reality that we were unsure of the outcome of that year’s presidential election until December 12th. With Election Day 2020 six weeks away, there are plenty of “what-if” questions to ponder so we thought it was timely to share some observations as we head into the final stretch.

Over the past century, large cap stocks have enjoyed positive returns in most presidential election years, see chart below. 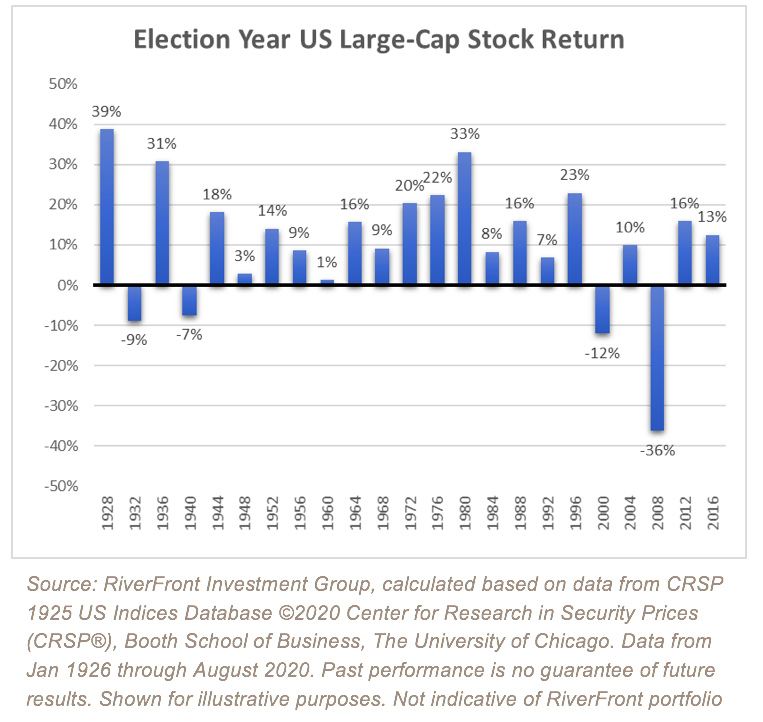 As the calendar turned to 2020, we believed the conditions for a positive year for equities were in place: Corporate earnings were forecast to rebound to double-digit growth as trade tensions eased and the US economy was growing slowly but steadily which meant that it was reasonable to expect the record economic expansion in the US could continue. Accordingly, we assigned an 85% probability to positive returns for the S&P 500 in our 2020 Outlook. Thus far, despite a global pandemic and a recession, the S&P 500 has recovered and is positive for the year. Estimates for GDP and US corporate earnings are once again trending higher, and COVID-19’s grip on the market and the economy seems to be loosening. Acknowledging the potential for a rocky ride, we believe equities will be higher by year-end.

What if: Biden or Trump? Fill in the blank with your choice of outcomes. Each candidate’s policies have been telegraphed and the upcoming debates could put finer points on each plan. If re-elected, President Donald Trump is expected to hold steady on the 2017 Tax Cuts and Jobs Act, maintain his tough stance on China, and push forward with infrastructure spending. Former Vice President Joe Biden would also be a proponent of infrastructure spending, whereas he has stated he will push for an increase in taxes for both corporations and high-income individuals. Additionally, many expect additional regulations on sectors such as financials, energy, and healthcare. One point that may be underappreciated about a Biden presidency is the potential for dropping tariff-based coercion against China, Europe, and other trading partners. We believe that this would be a positive for the global economy.

While Republicans are viewed as more business friendly, history tells us that equity markets have fared better during the years when a Democrat has occupied the White House. We know too well the pitfalls of trying to predict market behavior. An illustration of this point can be found in a 2016 New York Times article in which an economist from Massachusetts Institute of Technology wrote that the economy would plunge into a recession if Trump won. That view was shared by other Wall Street strategists, based on their belief that Secretary Hillary Clinton was a known entity and the uncertainties created by the election of a political unknown could be negative for markets.

As we think about the equity markets’ response to the outcome of the presidential election, we believe the outcomes of the Congressional races are equally important as these two legislative bodies make the laws for our country. In addition, the death of Supreme Court Justice Ruth Bader Ginsberg over the weekend will likely create another variable around some of the close races. Currently, the Republicans control the Senate and the Democrats control the House of Representatives. If this division of leadership remains in place post-election, we expect the market to respond favorably. Gridlock may be frustrating, but the probabilities for sweeping policy changes are reduced. A Blue Wave could be viewed negatively, at first, but the initial reaction will likely subside as policy realities become known and investors adjust portfolios accordingly. In this instance, knowing what the policy roadmap looks like is better than the uncertainties associated with the unknown. There are many quotes about forecasting and crystal balls, but we believe this one drives the point home: “He who lives by the crystal ball soon learns to eat ground glass.”

What if we don’t know the results after November 3rd? While many of us may be divided as to our political preference, we believe most will agree on one thing – we would prefer to know the outcome of the election quickly. That is looking more unlikely in 2020, and we believe it poses the biggest near-term risk to markets. It is estimated that as many as half of the votes cast this year could be in the form of mail-in ballots. There is no estimate as to the length of time it will take to count them, but it is unlikely to be completed by the time newspapers hit your doorstep on November 4th.

In addition to the length of time it will take to tally these ballots, matters are further complicated by the growing number of lawsuits in place to contest various aspects of the elections. According to the Stanford-M.I.T. Healthy Elections project, there are over 300 lawsuits contesting procedures, ballots, and more. Between now and Election Day, that number is expected to grow so much so that the United States Supreme Court has launched the 2020 Election Litigation Tracker to provide information on significant election-related cases. The number of lawsuits and talk of challenges makes the prospects for a contested election more likely. That outcome is viewed as the one most likely to have a negative impact on equity markets, and we agree.

The chart to the right illustrates the market’s negative reaction to the drama following the November 2000 election. While helpful, from an illustrative point, we are compelled to reiterate an oft-quoted disclosure from our industry – past performance does not guarantee future results. It is also worth noting that the market weakness in late 2000 was driven by more than just election uncertainty. In our opinion; the market was also starting to anticipate the economic downturn that would culminate in a recession by mid-2001. 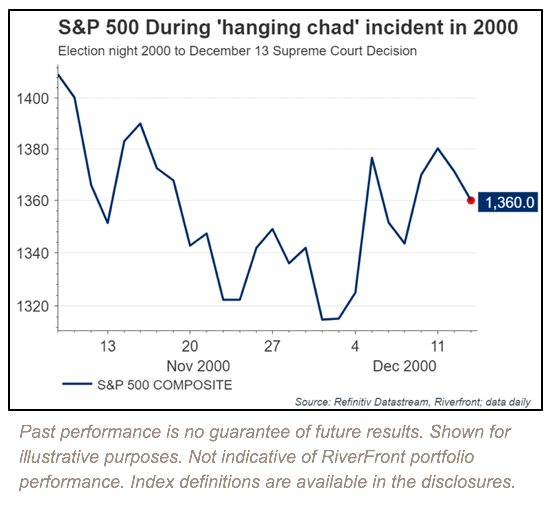 The first step of risk management is ensuring that portfolios are not ‘out on a limb’ before major events, like an election, so that they can be adjusted quickly if a change of direction is necessary. We believe we have achieved this with the recent reductions to our equity weighting in our balanced strategies. Second, it is important to remain objective, particularly when it comes to politics, so that decisions can be made with clear minds no matter the outcome. Our rules-based tactical discipline and our belief in ‘process over prediction’ help keep our portfolio managers objective and unemotional during times of uncertainty. Finally, it is important to plan a response for multiple scenarios even those that seem unlikely. To that end, we have organized an election task force to marshal all of RiverFront’s best thinking to make appropriate portfolio changes and communicate our thoughts clearly.

CRSP Universe Market Cap index information calculated based on data from CRSP 1925 US Indices Database ©2016 Center for Research in Security Prices (CRSP®), Booth School of Business, The University of Chicago. Used as a source for cap-based portfolio research appearing in publications, and by practitioners for benchmarking, the CRSP Cap-Based Portfolio Indices Product data tracks micro, small, mid- and large-cap stocks on monthly and quarterly frequencies. This product is used to track and analyze performance differentials between size-relative portfolios. CRSP ranks all NYSE companies by market capitalization and divides them into ten equally populated portfolios.

Alternext and NASDAQ stocks are then placed into the deciles determined by the NYSE breakpoints, based on market capitalization. The series of 10 indices are identified as CRSP 1 through CRSP 10, where CRSP 10 has the largest population and smallest market-capitalization. CRSP portfolios 1-2 represent large cap stocks, portfolios 3-5 represent mid-caps and portfolios 6-10 represent small caps.

To review other risks and more information about RiverFront, please visit the website at www.riverfrontig.com and the Form ADV, Part 2A. Copyright ©2020 RiverFront Investment Group. All Rights Reserved. ID 1338547