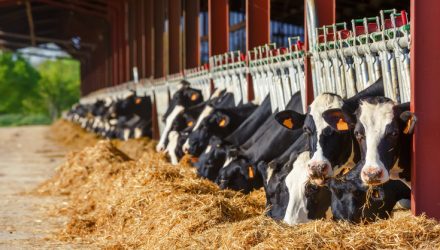 Why complete elimination of trade tariffs may never occur.

The Heritage Foundation, in their report titled “The Benefits of Free Trade: A Guide for Policymakers”, notes – “Societies that enact free trade policies create their own economic dynamism–fostering a wellspring of freedom, opportunity, and prosperity that benefits every citizen.” They also underscore that free trade “offers consumers the most choices and the best opportunities to improve their standard of living.”

It is a concept that America has consistently favored over the past century, with few exceptions. Moreover, as measured by the market capitalization of equities, it’s a philosophy that has served the American economy very well, particularly since World War II.

Although US society, as well as nations around the world, unquestionably draw significant benefit from global trade, the wealth isn’t equally shared by all. As other nations are able to produce goods either more efficiently or for a lower cost than stateside, a number of US jobs in that industry are eliminated. Ultimately this has resulted in rising inequality between unskilled and skilled workers as the former have continued to lose ground. The Economist notes in their “What is the future of free trade?” article that “technological progress, rather than global trade, has had the bigger impact on workers”.

However, a number of industries threatened by free trade have successfully lobbied to be shielded via protective tariffs and, in some cases, significant government subsidies. Almost every country has their protected industries, some of which are termed sacred cows based on the reticence of government to curtail their sheltered status.

Earlier this year much was made of the tariffs shielding the Canadian Dairy Industry – quite literally sacred cows! A heavily regulated system restricts production levels to ensure sustainable pricing, and simultaneously imposes significant tariff barriers on imports. It has been likened to Soviet style communism and such a characterization does not seem unfair. Nonetheless, given the importance of farmers to life in central Canada, this is unlikely to change anytime soon.

Canada is not unique in protecting politically sensitive businesses – it happens around the world. To be fair, the US sugar industry may be a similar offender.  Per the chart below, the American Enterprise Institute highlights that “By forcing Americans to pay an average of 43.4 cents per pound in 2012 for inefficiently produced domestic beet sugar instead of 26.5 cents per pound for more efficiently produced world sugar, US sugar policy forced Americans to pay a “premium” of almost 17 cents per pound for the roughly 17 billion pounds of American sugar”. That’s a premium of about $3b per annum that American consumers paid in in artificially inflated sugar costs. Certainly, some nations are bigger offenders than others, but none are immune. 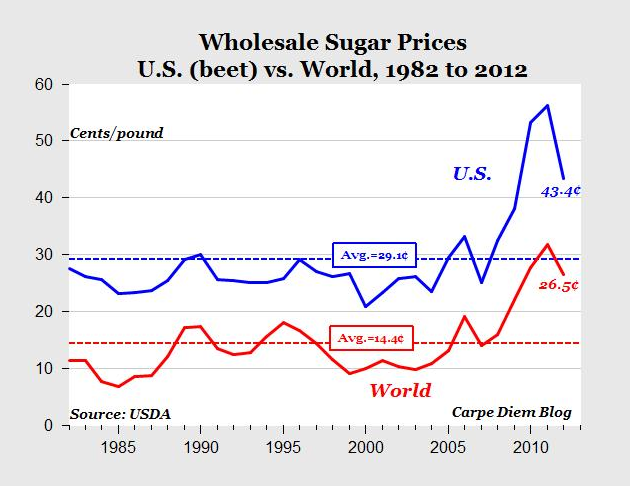 Most accept the Heritage Foundation premise that “Free trade policies have created a level of competition in today’s open market that engenders continual innovation and leads to better products”. However, because of significant political pressure from specific industries, although it’s a positive to move towards lower trade tariffs, truly free trade may never occur.