You are at:Home»ETF Strategist Channel»The U.S. Is Bigger Than This Election By Design 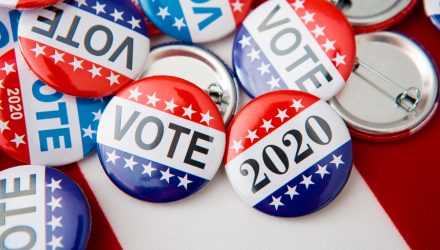 The U.S. Is Bigger Than This Election By Design

U.S. political elections have little long-term economic and market impact. One of the main reasons that presidential elections do not have a significant long-term impact is that the U.S. President does not have much of a real influence over the economy and the markets.

Consider a spectrum of executive power. On one end we have the President of China, which has a centrally planned economy. Governmental control in China is based in Beijing, and the government is heavily involved in the economy and even owns the major banks. Through this and other mechanisms, the President of China can direct resources and economic activity.

Our founding fathers, who were suspicious of tyrannical governments, intentionally crafted our form of government so that no branch, especially the executive branch, could wield too much power. Governmental policy change in the U.S. is a slow grind as compared to the more dramatic changes we see in other countries around the world. Our President must work with congress, hundreds of judges on the federal judiciary, and the 50 states in order to enact significant changes. Objections at any level gum up the works, and that is by design.

Importantly, since there are many independent mechanisms at work in the U.S. economy, it is difficult to see how a policy change could impact broader economic activity and the markets. We can see examples of this throughout history where the effect of one policy is muted by another. Recall the “Fiscal Cliff” going into 2013 when we experienced spending cuts and tax increases while the U.S. Federal Reserve (Fed) loosened monetary policy, which offset those headwinds. The S&P 500 Index gained almost 30% that year.

Given the stated policy objectives of the current presidential candidates, tax policy can be a good example of this scenario. As exhibit 1 illustrates, the tax cuts passed in late 2017 did not result in a sustained acceleration of economic activity as measured by gross domestic product (GDP). 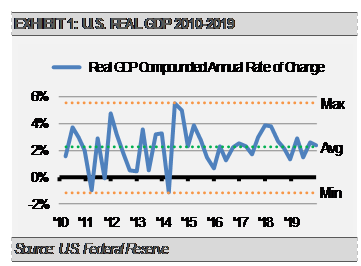 Though GDP growth picked up in 2018, it did not breakout of the recovery range. In reality, GDP growth quickly fell back to its average through the end of 2019 until the global response to the pandemic pushed our economy into a recession this past spring.

The lack of a significant and sustained acceleration in GDP growth from the tax cuts makes sense considering the other factors influencing the economy at the time, such as Fed policy tightening late in the business cycle. This tightening stunted many of the stimulative effects from the tax cuts.

Should Biden win in November, we expect the economic headwinds from his stated tax plan will be offset by other mechanisms as well, such as an increase in fiscal spending and a loose Fed monetary policy. The Fed’s current policy, as opposed to their policy in 2017, is supportive as the economy recovers from a recession.

While policies do matter, they do not happen in a vacuum. Over time, this complexity has worked to stabilize the U.S. system. Almost regardless of the situation or environment, history shows that the U.S. government, economy, and markets are bigger than any individual. In our view, the founding fathers succeeded in creating a framework that can withstand the tests of time and challenges of change.

S&P 500 Index – This Index is a capitalization-weighted index of 500 stocks. The Index is designed to measure performance of a broad domestic economy through changes in the aggregate market value of 500 stocks representing all major industries.