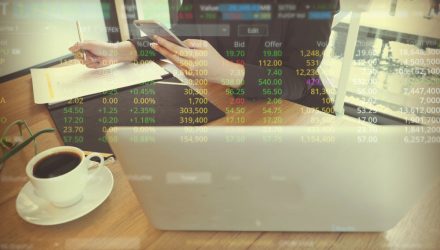 The Markets Will Confuse the Masses

Volatility continues to increase.  Last week was another eventful week in the markets.  Three of the four trading days (the market was closed on Monday for the holiday) were “outlier” days (a trading day beyond +/-1.50%).  On Wednesday, the S&P 500 declined by -1.84%.  On Friday, it was up by 2.24%, the third largest outlier day this year.  The most volatile day of all was actually Thursday.  The S&P 500 finished up on the day at exactly +1.50%, but its daily range was huge.  The S&P 500 was down as much as -2.6%, before a late day rally.  What was the reason behind this rally?  The answer isn’t that complicated.  The market finished UP because everyone expected it to be down.

The market is counterintuitive, which means that it will often do the opposite of what most investors expect.  On August 2nd, 1990, Iraq invaded Kuwait.  Over the next few months, the S&P 500 experienced a decline of about -15% from the date of the invasion.  As tensions rose, and the US debated getting involved in the conflict.  As a result, the market remained volatile.

Our team member, Tom Hardin, remembers coming into work and listening to the Squawk Box.  A contributor to the show stated something along the lines of: “if the US launches an attack, the market will not drop.  Why? Because most investors expect it to drop.”  Sure enough, Operation Desert Stormed commenced on January 17th, 1991.  On that day, the S&P 500 rose by +3.73%, when most investors least expected it.

Similarly, Putin announced military operation in the Ukraine on Thursday.  The Market opened sharply down, but finished sharply up, and continued into a strong upward move Friday.  Why? Again, most investors expected it to drop.

Bear markets are volatile because investors are emotional and confused about pricing.  Therefore, it is important to disconnect the market’s movements from the emotional events that surround it.  The market’s volatility is driven by supply and demand (the beliefs and emotions of investors), not the specific economic or geopolitical event itself.  The Russia/Ukraine news comes at a time when markets are already volatile.  A news event occurring in a volatile market will have a much larger emotional reaction than a news event that occurs in low volatility market environment.

There have been several cases in which newsworthy events have had very different impacts on the markets, it all just depends on what kind of market environment in which the event occurs, as defined by Canterbury’s Market States.  The JFK assassination occurred during a bull market.  The market dropped -3% and was at a new high a few days later.  Reagan getting shot, Brexit, the Boston Marathon bombing, and the US bombing of Syria all occurred in bull markets had very little impact on the movement of the stock market.  On the other hand, news events occurring in volatile bear markets saw significant market movements.  President Eisenhower survived a heart attack during a volatile market caused more market volatility.  Major events like 9/11 and Pearl Harbor both occurred in bear or transitional market states when markets had already been volatile. The impact of these events had less to do with their severity and more to do with the overall market environment at the time.

The events happening in the Ukraine are tragic and bring uncertainty.  Uncertain events that occur when markets are already volatile, tend to have a larger impact on the market’s movement, in either direction.

Right now, the S&P 500 is 88% oversold, even after Thursday and Friday’s large upward move.  That would imply that there is a higher-than-normal probability of some sort of kickback rally.  You can see in the chart below that the market recently kicked off of some short-term support, after breaking support intraday Thursday.  There is no telling the extent or duration of any potential market rally from here but expect the market to remain volatile in both directions.  You can see in the chart below that volatility, as measured by the Canterbury Volatility Index, has risen substantially over the past few months, and now measures CVI 99, the highest it has been since it was coming off highs in 2020. 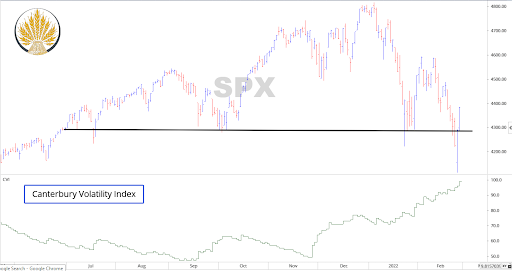 Energy continues to be the leading sector and is the only market sector that is in a “bullish” Market State.  All the other 10 sectors are in “transitional” or “bearish” Market States, meaning they have high volatility and sideways/negative trend.

There is a scary situation going on in the Ukraine right now.  It seems that for the first time in a long time, politicians on both sides share the same opinion towards the escalating conflict.  We are not here to give opinions on the implications of what is happening, but any news event in this type of market environment will play a role on investor psychology and emotion.  Expect the markets to continue to fluctuate, in both directions.