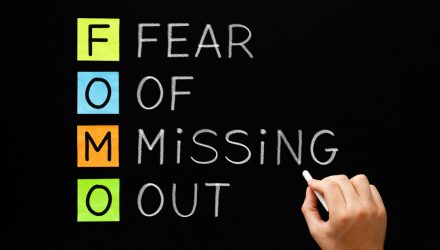 The Fear of Missing Out

The events over the last 3 months have been a real challenge for all of us. As far as the markets are concerned, we have gotten a crash course in why our human logic is not capable of understanding, or predicting, how unexpected events will impact market behavior. We have certainly seen more than our share of “unexpected events” as well as strange market behavior.

The March sell off was particularly hard to deal with. It started from a new market high and very low volatility. A sharp decline will typically begin with a steady increase in volatility. Increasing volatility gives a warning that something bad could be on the horizon. That was not the case at the February 19th market high.

The Coronavirus Pandemic caused an unprecedented market event that really has never been seen before.  There was no way to predict a 34% drop would occur in just 23 trading days with no meaningful advances in between.  At the bottom on April 23, we said that a rally was likely to happen fast, over days and not weeks, if you were not already in… you would not have time to get in. That said, we were as surprised as anyone that the S&P 500 regained half of its 34% decline in just 13 days.

From there, the market has remained highly volatile, with most of the volatility continuing to be on the upside, with virtually every investor in disbelief.  When it comes to dealing with this type of environments, we cannot attempt to make rational decisions about an irrational environment.  As people, we are mostly logical, and for most of the time, markets are too.  In today’s environment, however, the market is not logically driven.

We have discussed in past updates the concept of FOMO, or the Fear Of Missing Out, along with the “Dash for Trash.”  Looking at these two phrases, they go hand-in-hand with today’s market environment.

The S&P 500 stocks that have led the market over the past 3 weeks are not the same the stocks that led the market through March and April.  In fact, they are just the opposite.  As the market regained half of what was lost, it entered into a short trading range.  Investors who had missed out on the kickback rally, experienced a FOMO effect.  After suffering losses, they feared missing out on any more potential gains and began searching for stocks who had not yet experienced advances.  This led to a “Dash for Trash.”

Looking at a list of stocks that have led the market’s parabolic surge over the past 3 weeks, you will notice one thing very clearly: these are the same stocks that were hit the hardest from Coronavirus fallout and the same companies that are likely going to need some assistance to even stay in business.

The table below shows the top 10 performing S&P 500 stocks over the last 15 trading days (3 weeks), along with their percentage gains in that short period, as well as their percentage off their respective highs.

These companies, which are mostly airlines and cruise liners, were hit hardest by the pandemic expectations. Now as investors who were late to the rally begin to panic, they look for opportunities in stocks that had previously gotten slammed.  These same stocks, which you can see have experienced unparalleled rises in just 15 days, are still nowhere near sniffing their old highs.

To give you a better idea, if we look at the top 50 performing S&P 500 stocks in the last 3 weeks, on average they are up about 57%, but still remain -37% from their old high.  Compare those 50 stocks to the 50 best performing stocks from the markets peak on February 19th through mid-May, and those stocks are actually flat on average for the last 3 weeks.  As another point, 20-year treasuries were down -8% in that time frame.

Another exaggerated example is Hertz Rental Car.  Today, Monday, Hertz stock is up 112% at $5.53 per share.  Back in February, the stock was $21 per share, meaning Hertz still has to double two more times (+281%) just to get back to breakeven.  This is all after the company filed for Bankruptcy.  When it’s all said and done, Hertz’s stock price could ultimately end up at $0, yet investors panic to buy stock.

It is impossible to make rational decisions about an irrational market.  I’m sure you’ve seen on the news that many hedge fund managers are surprised over the market’s recent movement. At Canterbury, we are surprised as well, but know that volatility works both ways.

Right now, the markets are being driven by stocks that are behaving more like a blackjack table rather than a blue chip security.