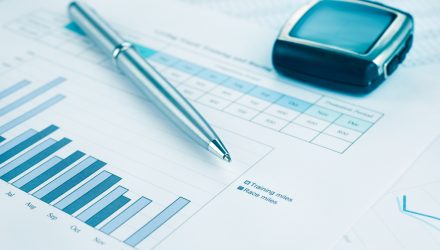 The 4 Stages of a Rate Cycle

We more than doubled our portfolios’ duration in a single day this summer.  Since then, many have asked: If RBA thinks inflation can be persistent and on a secular basis continue to surprise to the upside, why would we overweight long-term Treasuries? The answer lies in the nuances of how interest rates have historically behaved during different economic, profit, and tightening cycles. We believe sentiment has exited Stage 2 and is now in the early part of Stage 3: a period when the market begins to price in lower long-term growth as a profit recession looms.

Stage 1: Ready, set, rise
The first stage of a rate cycle presents itself when Treasury yields are at rock bottom, the Federal Reserve’s policy stance is maximum dovishness and profit and economic growth is at or near a trough. In this current cycle, August 4th, 2020 marked the start of Stage 1. With financial conditions supportive of higher inflation and economic and profit recovery, rates across the curve always increase during Stage 1. As RBA was throughout 2021, this is the time for maximum underweight of duration.

Stage 2: Blow off the top
The second stage of a rate cycle is marked by strong growth and inflation and a Fed that goes from easy (QE, low Fed Funds) to less easy (tapering asset purchases) to modestly tightening (first rate hike). Like Stage 1, this environment is a recipe for higher rates and is generally characterized by a steeper, but overall higher yield curve. During Stage 2, the market begins to lose confidence in the Fed’s ability to slow growth and inflation, often leading to a “blow off the top” in Treasury yields that sends the near-term forward spread (the difference between the current 3-month T-bill and its expected rate 6 quarters in the future) to extremes. During this phase, the Fed isn’t doing enough to slow nominal growth, so long-end yields go up by more than short-end yields, a phenomenon known as “bear steepening.” 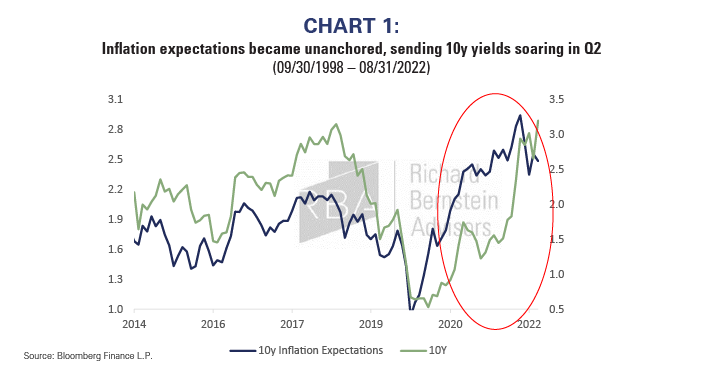 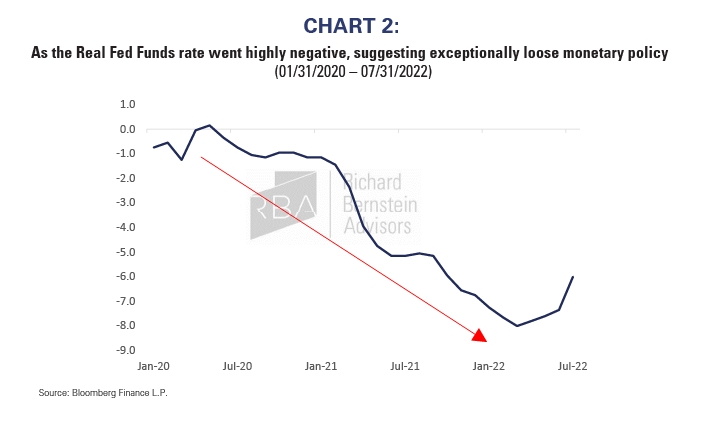 Stage 3: Catch Up and Inversion
The third stage of the interest rate cycle is marked by profit and economic growth that has begun to moderate and by a Fed that starts to aggressively tighten financial conditions. In the current cycle, the markets have now entered Stage 3, which is often a tricky time for investors. Inflation is high, and growth is still positive, the Fed raises rates often leaving one to assume higher yields across the interest rate curve. However, earnings and economic growth have usually peaked during this period, while the Fed has committed to slowing demand. Consequently, this phase is characterized by curve inversion; higher 2-year yields than 10-year yields, otherwise known as “bear flattening.”

Importantly, the front-end of the yield curve represents policy, while longer-dated yields represent growth. At this point in the interest rate cycle, growth should start to matter more to longer dated yields than elevated inflation. Data is often choppy during this transition and market volatility increases as investors adjust to a new paradigm. The 1970s and 1980s have several such examples when interest rates fell despite inflation at 11% and 8% respectively. The common theme during those times were earnings recessions and growth slowdowns.

Stage 4: The End and Steepening
The fourth stage is when the market (and ultimately Fed) price and engage in interest rate cuts. By the time this happens, economic and earnings growth is negative and yields across the entire interest rate curve collapse. During this stage, the Fed cuts interest rates and 2-year yields collapse, causing a re-steepening (known as “bull steepening”) of the yield curve. We view Stage 4 occurring sometime in 2023, as we expect the earnings recession to deepen and the effects of a year’s worth of tightening to take hold in the real economy. 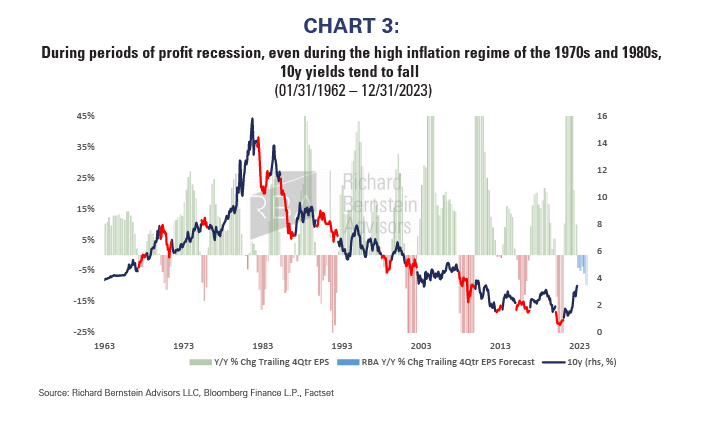 Nothing contained herein constitutes tax, legal, insurance or investment advice, or the recommendation of or an offer to sell, or the solicitation of an offer to buy or invest in any investment product, vehicle, service or instrument. Such an offer or solicitation may only be made by delivery to a prospective investor of formal  offering materials, including subscription or account documents or forms, which include detailed discussions  of the terms of the respective product, vehicle, service or instrument, including the principal risk factors that  might impact such a purchase or investment, and which should be reviewed carefully by any such investor  before making the decision to invest. RBA information may include statements concerning financial market trends and/or individual stocks, and are based on current market conditions, which will fluctuate and may be superseded by subsequent market events or for other reasons. Historic market trends are not reliable indicators of actual future market behavior or future performance of any particular investment which may differ materially, and should not be relied upon as such. The investment strategy and broad themes discussed herein may be inappropriate for investors depending on their specific investment objectives and financial situation. Information contained in the material has been obtained from sources believed to be reliable, but not guaranteed. You should note that the materials are provided “as is” without any express or implied warranties.  Past performance is not a guarantee of future results. All investments involve a degree of risk, including the risk of loss. No part of RBA’s materials may be reproduced in any form, or referred to in any other publication, without express written permission from RBA. Links to appearances and articles by Richard  Bernstein, whether in the press, on television or otherwise, are provided for informational purposes only and  in no way should be considered a recommendation of any particular investment product, vehicle, service or  instrument or the rendering of investment advice, which must always be evaluated by a prospective investor  in consultation with his or her own financial adviser and in light of his or her own circumstances, including the  investor’s investment horizon, appetite for risk, and ability to withstand a potential loss of some or all of an  investment’s value. Investing is subject to market risks. Investors acknowledge and accept the potential loss of some or all of an investment’s value. Views represented are subject to change at the sole discretion of Richard Bernstein Advisors LLC. Richard Bernstein Advisors LLC does not undertake to advise you of any changes in the views expressed herein.