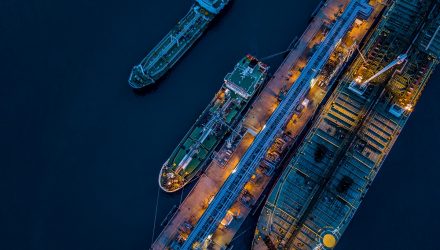 The Story of an ETN (Exchange-Traded Note)

It all started on a fine August day in 2006. Bees were buzzing, China was surging, NINJA loans were flowing, and oil had just come off an impressive surge and was poised for new records. Exchange-traded products had been around for more than 15 years but had yet to reach their more recent levels of rapid growth. Investors wanted exposure to high-flying oil prices, and they wanted better tax treatment. In came Barclay’s, ready to raise the exchange-traded note (ETN) industry to new heights. The Barclays iPath S&P GSCI Crude Oil Total Return Index ETN (original ticker OIL) was born.

It didn’t take long before assets began to build in the product – helped, no doubt, by “peak oil” worries and insatiable demand from the rest of the world. Additional ETNs were issued throughout 2008 and 2009, and that was met with increased volumes in the product. (See issuance level in orange and net assets in green on chart below. More on this later.) 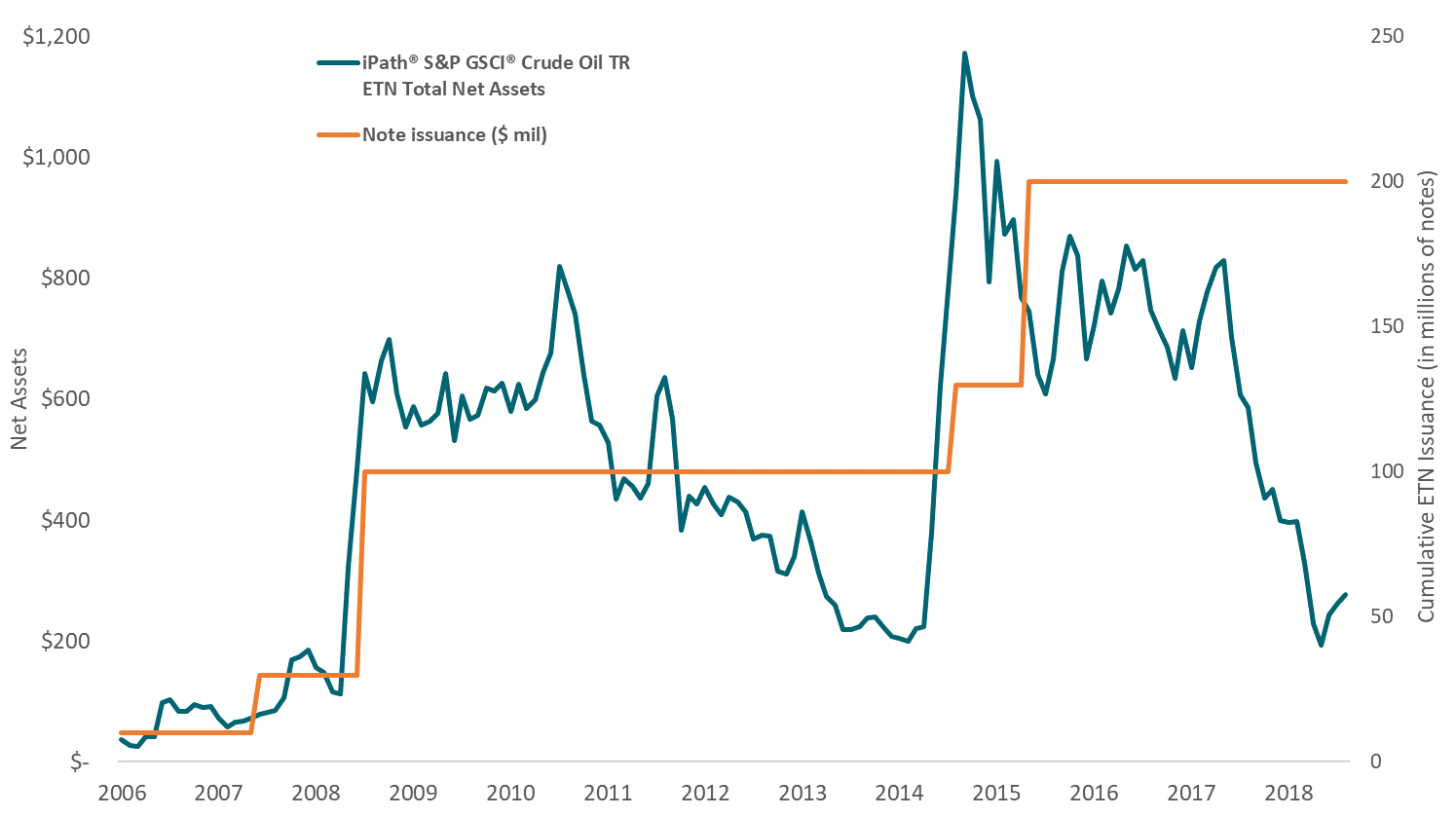 Chart shows the total net assets in green and the new note issuance by Barclays in orange. Source: Morningstar, Barclays

The 2008 financial crisis brought immense volatility and drama to the world, but it also provided a ripe platform for the growth of oil prices and, subsequently, the OIL ETN. Prices shot higher, and assets skyrocketed in the note, which quickly became one of the top ways to play the oil market.

Fast forward to 2012. Oil prices had found a range between $80-$100/barrel once again. As the year wore on, volatility started to decline across asset classes, and WTI crude could taste triple-digits once again. Under the surface, some interesting changes started to happen.

First, oil futures started to trade in contango, which means the front month futures contract (that OIL tracks) is lower than the next several months’ contract price. Certain ETFs in the market, such as DBO, DBE, and DBC, buy futures in months further out in order to combat this. As a result of having to buy futures at higher prices each month, the index that OIL tracked was losing value on what’s called “the roll.” “Roll-optimized” ETFs were gaining market share, and OIL was losing assets.

Second, the OIL ETN is part of an archaic first-generation product that calculates fees based on a special NAV that accrues fees over time from the inception of the product. This starts to eat away at returns if the product goes down over time, which OIL definitely has since the heyday of oil prices pre-financial crisis. In one scenario in the product prospectus, the provider illustrates a hypothetical example where OILNF underperformed its index by almost 6%! At least they warned us. To most investors, this is hard to figure out because the NAV that OIL tracks reflects the fee, but the index the NAV tracks does not. Either way, investors were starting to notice that OIL was lagging oil prices. Clear as mud? 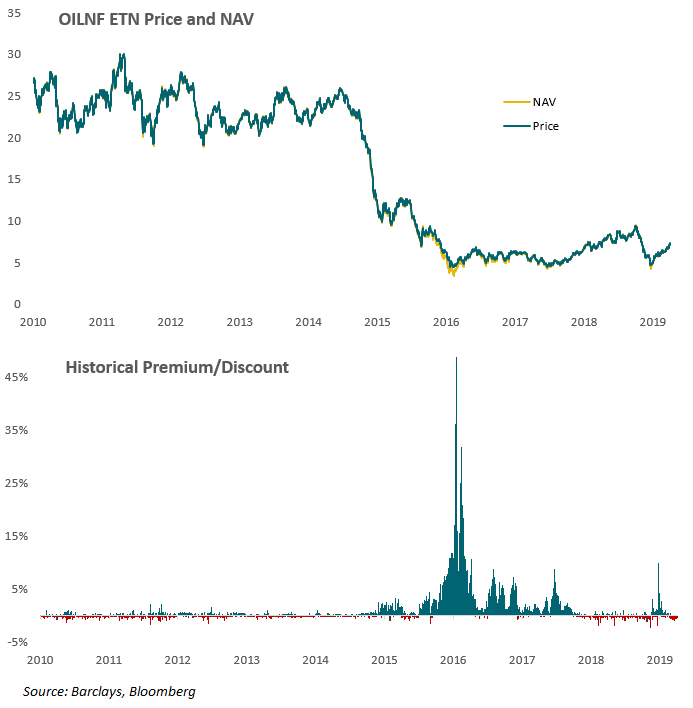 On top of these headwinds to the OIL ETN, the crude oil market began to collapse in late 2014. This exacerbated the fee issue. As prices and assets fell, spreads widened to nearly 2% with assets shrinking to approximately $200 million. Barclays issued a new round of notes in March 2015. 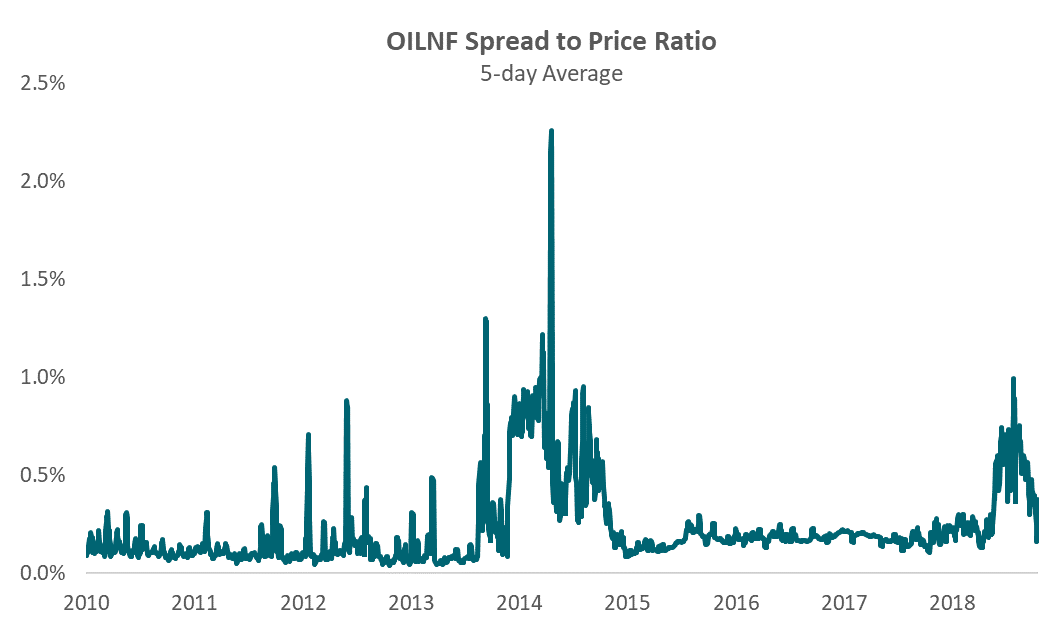 Shown is the price spread in % terms of the OIL (renamed OILNF) ETN since 2010. Source: Bloomberg

But this was only the beginning.

By September 2015, Barclay’s decided it didn’t want to issue any more of this note and likely other notes, too. As such, it instigated a $0.50-per-share fee for new creations – a hefty price tag for an ETN trading around $8 per share at the time. This new fee, coupled with a new-found gaggle of oil-price-bottom fishers, caused the fund to start trading at a premium to its NAV, as prices were held at least $0.50 higher than NAV due to the create cost. It was small at first, maybe 1-2%, but by December the premium had climbed to near double digits! This led the SEC to issue a bulletin on the risks of ETNs.

By December 15, 2015, with the premium in double digits, Barclay’s was all but forced to issue another round of shares of the note to control the premium – a last-ditch effort. But demand was building immensely as oil reached new lows. The premium did not collapse as Barclay’s hoped but skyrocketed to a high of 49% by January 20, 2016! That same day, UBS, another ETN provider, announced it would redeem two of its levered MLP ETNs that were down nearly 50% on the year. Uh oh – what if Barclays was going to redeem OIL? It surely would redeem at NAV, a value 50% below the current market price.

The next day, front month oil futures surged 11%, yet the OIL ETN fell 17% as the premium collapsed!

Amazingly, the fear was all for naught. This particular note did not have a call feature that allowed Barclays to redeem the note like UBS did. Shareholders voted it down in 2013. The premium remained elevated through most of the rest of the year. On November 18, 2016, note issuance and sales from inventory were suspended indefinitely. 2017’s calm and strong market kept assets in OIL afloat, but not long into 2018, they started to leave in droves.

Why is any of this important today?

Because this is not yet an obituary. OIL lives on, delisted from major indices and disguised under the ticker OILNF. Amazingly, still with just under $300 million in assets! While that may not sound like all that much, OILNF is still larger than 2,300 ETFs and ETNs that are listed today! OILB launched as a new Series B note in 2016, and in December of last year, its ticker was changed back to the original OIL. Now with a less-tainted history, a 0.45% “investor fee rate” and apparently a ticker symbol too good to retire, OIL (series B) has been gaining assets likely from its former self, still out there on life support.

I doubt Netflix will pick this story up any time soon. But in my view, it remains an infamous example of the due diligence required in owning any kind of investment product, let alone exchange-traded notes.

Huge thanks to Dave Nadig of ETF.com for his original article on the topic from 2016. Causes and reasons for actions of Barclay’s as stated in the article are assumed by the author.