You are at:Home»ETF Strategist Channel»Stock Splits, Indexes, and Warren Buffett 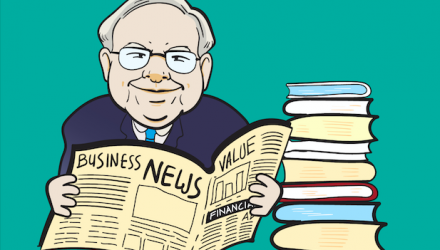 While the S&P 500 and Nasdaq continue to rise, most equity indexes struggle. This was also pointed out in last week’s update and shown using the Advance-Decline line. A link to that update can be found here: https://www.canterburygroup.com/Apple-Tesla-and-Market-Breadth.html.

Right now, its pretty clear that there are some huge differences in the broad-based indexes. For example, Large cap growth stocks advance, small caps, mid-caps, and value struggle to keep up.

The Dow Jones Industrial Average was launched in 1896 with the intent of measuring the health of the economy and overall stock market. At the time, the initial 12 components of the Dow were representative of many commodities ranging from tobacco, to sugar to oil. Over the last 100 plus years, the components of the Dow have evolved to now represent 30 large companies, making it more in line with today’s US production economy.

Unlike the S&P 500, which is a market cap-weighted index (the larger the market capitalization, the more weight a stock has an index), the Dow Jones Industrial Average is a price weighted index, meaning the higher price of a listed stock, the bigger the impact the stock has on the index’s movements. For example, a stock with a listed price of $100, would have a larger impact on the index than a stock with a listed price of $50, even if the $50 stock is a larger company (based on market cap).

As many of you are aware, Apple (ticker: AAPL) had a 4 for 1 stock split last Friday. That means that if you owned 1 share of Apple at $500 the day before the split, then the next day you would have 4 shares at a reduced $125 per share. Mathematically your total value would be the same as before. That said, the lower price per share does have an impact on its influence on the Dow which is a “price weighted” index. Specifically, before the split, Apple accounted for about 12% of the value of the Dow Index. After the reduction in Apple’s price per share means that it now accounts for only about 3% of the Dows value.

Apple moved from having the largest impact on the Dow’s pricing to the 18th largest. One would think that because of Apple’s significant weighting reduction that the Dow Jones’s Technology allocation would have decreased, by about 10%. The reality is, however, that the Dow’s technology weighting did not change much. In addition to Apple’s split, the Dow added Salesforce (technology), Honeywell (industrials), and Amgen (healthcare) to the exclusive 30-stock index and removed some smaller components like Exxon (energy), Raytheon (industrials), and Pfizer (Healthcare).

Even after the reduction in Apple’s weighting, Technology still holds the largest sector weighting (24%; was 27% prior to Friday’s changes):

Stocks are oftentimes put into one of two categories: value or growth. As a general rule, Value companies are companies that have usually been around a long time. Value stocks tend to have high dividend yields and a low P/E (price to earnings) ratio (meaning the company generates higher earnings compared to the price of the stock). On the other hand, a Growth stock is normally a relatively newer company that pays little or no dividends (reinvests money to accelerate company growth). Growth companies tend to have higher P/E ratios (meaning the company has a higher stock price compared to lower company earnings).

Warren Buffett is without a doubt the most famous Value investor of all time. He puts emphasis on buying companies with strong fundamentals, that usually resemble characteristics of a Value stock rather than a Growth stock.

In the current market environment, Value stocks have been struggling. If you were a stock-only investor, and did not own any technology, it would be very difficult to keep pace with many technology-heavy indexes. Growth, and its largest component, Apple, have carried the markets.

According to the State Street SPDR Value ETF, Berkshire Hathaway (Warren Buffett’s investment portfolio) is the largest component of the S&P 500 Value index. One would think that Buffett’s portfolio has struggled since he has primarily invested in Value stocks, and it has, but if it weren’t for one stock, it would be doing much worse.

Get this, Warren Buffett’s largest holding is Apple… at about 50% of the total portfolio. That’s right, Warren Buffett’s investment portfolio is mostly bank stocks and consumer staples (the former has been terrible this year), but is half invested in just one stock. Now, Buffett is a notably not one to diversify, but 50% seems like a bit much, doesn’t it– a 255-billion-dollar fund with 50% of its assets in one stock?

Apple has outpaced the markets considerably, and Buffett is lucky that his 50% bet paid off; many of his other selections have not been so fortunate.

Indexes are not meant to be investment portfolios. Indexes often favor a select few sectors. We have talked about this in the past, but the S&P 500 being basically 35% technology does not make it have efficient diversification. Right now, most major indexes (aside from the Nasdaq) have struggled maintaining a pace with the S&P 500. If an index has any reduced exposure to technology (like Value), it has suffered.

I guess we will be finding out just how important Apple is to the Dow. At a previous 12% allocation to the index, it had certainly carried it this year. Apple has definitely carried Berkshire Hathaway… those financial stocks have not faired too well.

This market has been interesting, but every stock will eventually experience a bearish downturn. All stocks will have a period of extended high volatility. It is a question of when, not if. Technology-oriented stocks have been white hot this year while most sectors have substantially lagged. Don’t expect that trend to last forever.