You are at:Home»ETF Strategist Channel»Santa Claus Rally Came to Town in December 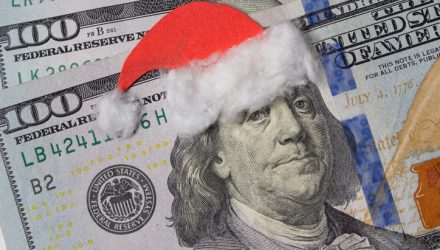 Markets did not pause in the final quarter or final month of 2019 and major U.S. equity indices achieved new all-time highs as the year concluded. The trade situation with China had been an on-again, off-again weight on stocks in 2019. Late in the year, a so-called phase one trade deal with China had apparently been agreed upon with a signing ceremony scheduled for mid-January at the White House.

As this temporary amelioration in the trade war with China hit the markets, stocks rallied and closed the year out strongly. The backdrop of the Trump impeachment proceedings in the House and, ultimately, a vote of impeachment, appeared to have little impact on the market. Playing out along party lines, the formal impeachment in the House seemed a foregone conclusion. The trial in the Senate seems equally a foregone conclusion with very little chance of Trump being removed from office, so markets have largely dismissed this political event.

Fed Chairman Powell lowered policy rates three times in the second half of 2019, largely in line with expectations. Outside of engaging in notable liquidity operations, which has the effect of increasing its balance sheet, the Fed seems content with remaining on hold for the foreseeable future. After years of being on the front lines of market and economic expectations, the Fed appears to be heading to a quieter role in 2020 operating more in the background of the economy. This will likely be a welcome development for Powell who will no doubt enjoy being out of the limelight, at least temporarily, in 2020.

In 2019, we generally saw U.S. large-cap growth companies outpace most other parts of the market. However, we have noted that other areas of the market made some headway against this broader trend in the latter part of 2019. While hard to poke holes in any return data after such an exceptional year of widespread stock market results, the theme of growth outperforming value did hold overall in 2019.

At Clark Capital, we employ value-oriented measures in our investment process and believe that over a full market cycle, buying good companies at a good price will be rewarded. Earlier this year, we were seeing historical extremes in the market when looking at the discount that value stocks were trading at compared to the broader market. We continue to believe that this growth/value situation will revert closer to historical norms and value-oriented stocks should benefit in the long run. As more diverse areas of the market make gains (for example international stocks), we believe diversified portfolios should benefit as well.

While both indices showed strong results for the year, the dominance of growth was clear when looking at these indices with the growth index advancing 36.39% compared to its value counterpart, which gained 26.54% – a nearly thousand basis-point difference. The difference was not quite as dramatic in the small-cap universe, but it held nonetheless. Although small-cap value stocks, as measured by the Russell 2000 Value Index, were strong in December (up 3.50% compared to the Russell 2000 Growth Index gain of 2.29%), the returns for the year were 22.39% and 28.48%, respectively.

Fixed income results were mixed in December as rates moved higher. In a month defined by a more risk-on tone to the rally, high-yield bonds performed the best and safer and more interest sensitive pockets of the market struggled. Despite more mixed results in December, most areas of fixed income enjoyed solid gains in 2019 as interest rates ended the year dramatically lower than where they began 2019.

The closing yield for the 10-year U.S. Treasury in 2019 was 1.92% compared to 2.69% in December 2018. We believe that rates will be rather range-bound in 2020 between 1.5% and 2.5% and we maintain our long-standing position favoring credit versus interest rate exposure in this environment.

The record length of this economic expansion continues to build on its decade-plus tenure as we close out 2019. Concerns have lingered regarding how long this expansion can last and, while data is mixed, slow economic growth continues. We continue to expect that this expansion will run well into 2020.

The inversion of the yield curve occurred in 2019, but we closed out the year with the yield curve positively sloped once again. We have written several times about the historical importance of a yield curve inversion and how every recession we have had since the 1960s has been preceded by an inverted yield curve.

However, there have also been two instances of an inverted yield curve without a recession. It is also important to acknowledge that the Fed has made a clear U-turn in 2019 from its tightening ways from December 2015-December 2018. October saw the Fed cut rates for the third time in three consecutive FOMC meetings as it clearly moved to a more expansionary bias versus contractionary. The key question we will continue to focus on is did the Fed reverse course in time?