You are at:Home»ETF Strategist Channel»Rising Taxes and Out-Migration Trends: A Bad Budgetary Combo 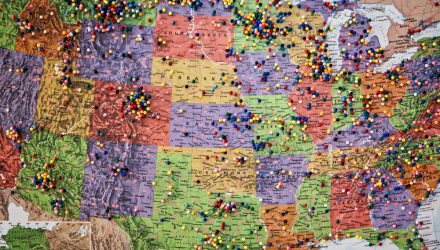 Numerous major metropolitan cities have experienced an economic boom over the past decade as the technology, energy, health care, and financial industries have flourished. Although their fiscal outlook has improved dramatically since the Great Recession, municipalities face several challenges. An influx of highly paid employees has been a double-edged sword. Tax revenue has increased but so has the cost of living, which has decreased affordability for public service workers. Raising taxes to pay higher salaries for public service workers is only a short-term solution, as municipalities will eventually have to grapple with their main source of revenue – wealthy taxpayers – moving to less-taxing states.

Politicians have been talking about the wealth gap for decades yet have done little to fix the real issue. In this case, the benefits of economic success are being offset by the challenges associated with providing enough public services. That may seem counterintuitive since with more revenue generated comes greater funding ability. However, public services are often the largest municipal expenditure, and the public employees providing these services – teachers, firefighters, police – require an adequate salary to afford to live in the areas they serve. The additional revenue received from high-income tax payers has not been enough to support necessary salary and benefit increases to support the increased cost of living for public service employees. (It is important to note that salaries and benefits for public employees are fixed and don’t fluctuate in-line with tax revenue.) Just look at the defaults of Puerto Rico, Detroit, and Vallejo.

Although the top 10 cities listed above are currently rated AA or better, the growing economic strain associated with the need for additional public services remains unsustainable and will eventually bring greater downward pressure on their respective credit ratings.

A good example of this challenge is found in not only New York City but, more importantly, in New York State, which recently announced a projected $2.3 billion budget deficit. According to New York State officials, this is the most serious revenue shock the state has faced in many years and it is expected to worsen before it gets better. Fiscal imbalances of this nature and magnitude are becoming more common among those cities and states with exceedingly high tax burdens. Indeed, according to a recent WalletHub survey that looked at the combined state income, property and sales tax burdens paid by citizens, New York came in first, at 13.04%; with Illinois, New Jersey, and California close behind.

Ongoing political pressure to resolve these challenges will undoubtedly lead to an increase in tax rates, primarily on the wealthy. Although this may initially seem appropriate and prudent, the high reliance on high-net-worth residents can be fickle. Unfortunately, voters and politicians severely discount the ability of wealthy individuals to relocate to friendlier tax environments. For example, growing tax burdens have become a force for significant out-migration from the Northeast and California to places like Florida and Texas. According the 42nd Annual National Movers study by United Van Lines, last year 61.5% of New York residents left the state, while just 38.5% moved there. More importantly, of those who left, 41% earned $150,000 or more and only 8.4% earned less than $50,000. It is also worth noting that New York City, a traditional magnet for the young and talented, saw the biggest loss of millennials last year compared to other large cities, with more than 29,000 residents moving elsewhere.