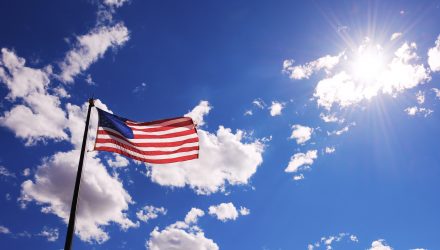 Editor’s Note: The following information was originally published on July 16, 2018.

Prospects for a temporary reacceleration of economic growth in the U.S., and for continued trade tensions globally, do not change our fundamental view that the U.S. is on a favorable path of moderate economic growth while challenges remain abroad.

Moderate economic growth continued in the U.S. during the second quarter of 2018 (Q2). Payroll employment gains remained solid, averaging over 210,000 per month in Q2, while real GDP growth decelerated to a 2.0% annualized rate in the first quarter (Q1), in line with the average pace of economic growth over the last few years.

The consumer remained a key source of economic strength in Q2, with core retail sales posting 4.9% year-over-year growth in June (see Figure 1). Consumer spending growth has been fueled by elevated measures of consumer confidence driven, in part, by a 45 year low in layoffs. 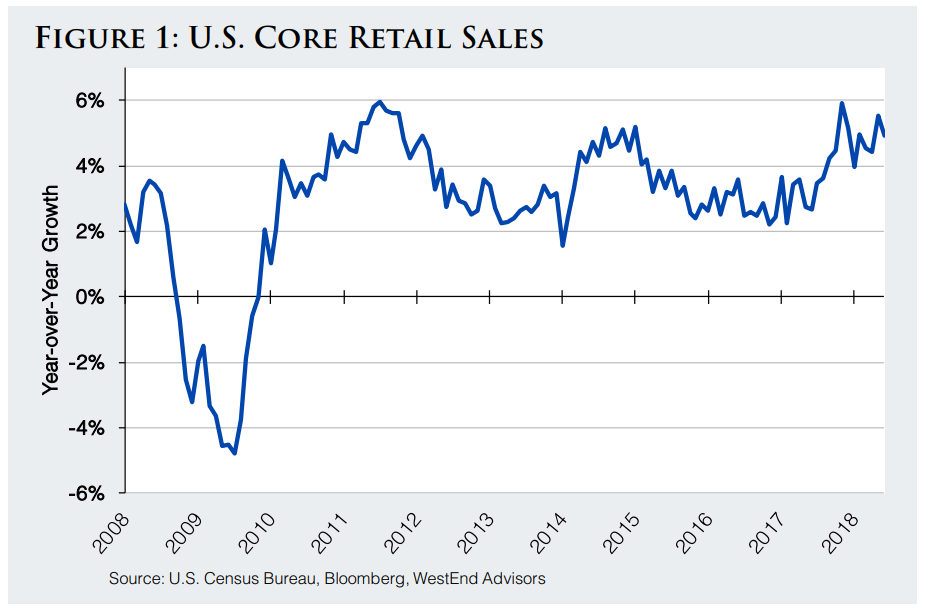 U.S. equity markets posted solid gains in Q2, with the S&P 500 Index returning 3.43%. Equity market volatility also eased from Q1. Investors in the U.S. largely seemed to take escalating trade disputes in stride, likely assuming trade rhetoric and policy actions will de-escalate. U.S. sector performance was mixed in Q2. Energy was the best-performing sector last quarter, following significant underperformance in Q1, as the price of oil rose in April amid short-term supply concerns. The Information Technology and Consumer Discretionary Sectors also outperformed, and the Health Care Sector received a boost in May as the Trump administration released its Blueprint to Lower Drug Prices, which reduced uncertainty around drug pricing for pharmaceutical and biotech firms. Interest rate-sensitive sectors like Utilities and Consumer Staples underperformed.

International equity markets underperformed in U.S. dollar terms in Q2, with the MSCI ACWI ex-U.S. returning -2.62% as the dollar appreciated materially against most other currencies.

While most developed markets rose in their local currencies, the dollar’s strength reduced those returns for U.S.-based investors.

The Federal Reserve (Fed) once again raised its target Fed Funds rate in June. The move up in longer-term Treasury rates was less pronounced in Q2, following significant increases in Q4 and Q1, as inflation appeared to stabilize just above two percent.

We continue to have a constructive view of global equity markets, and of select U.S. sectors, in particular. The Health Care and Information Technology Sectors, for example, should benefit from a mix of cyclical and secular tailwinds. While macroeconomic and political factors continue to evolve, we believe that the U.S. will continue to deliver moderate economic growth. Challenges are more pronounced abroad, due in part to ongoing structural headwinds and persistent slow growth in overseas developed markets. Higher interest rates in the U.S. and the potential for continued U.S. dollar strength also present elevated risks for emerging markets.

U.S. Economy: Expectations for economic reacceleration in the U.S. have increased in recent months. Some recent data does suggest there was a pick-up in Q2 GDP growth, but we believe any material reacceleration of growth is unlikely to be sustained.

Factors that may boost the GDP reading for Q2 are likely to prove transitory, including a possible benefit from an inventory build, a skewing of import growth data from one-time payments for Olympic broadcasting rights in Q1, and a rush to export goods like soy beans in Q2 ahead of the implementation of overseas tariffs. We expect, however, that the trend of moderate economic growth which has typified this near-decade-long U.S. expansion will persist in the intermediate term.

The U.S. consumer should remain a key area of strength for the economy. Steady gains in disposable personal income (personal income less taxes paid) for individuals have supported consumer spending and the overall economy. In fact, disposable income growth stands at the highest level since early 2015. Lower individual tax rates have supported this after-tax income growth, but the elimination of various tax deductions materially offset the benefit of lower rates. Personal taxes paid as of May were down 2% compared to December 2017, but the measure was still up nearly 4% year-over-year. The limited net benefit of personal tax reform is another factor that reduces the probability of a material reacceleration of economic growth.

In contrast, businesses have been the bigger beneficiaries of tax reform. Corporate taxes paid, as measured by the Bureau of Economic Analysis, were down 29% in Q1 2018 compared to Q4 2017 (see Figure 2). This has provided a boost to 2018 earnings expectations and, in turn, brought down price-to-earnings multiples for U.S. stocks. Companies are also returning tax savings to shareholders through share buybacks and dividend increases, which should provide further support for stock prices. 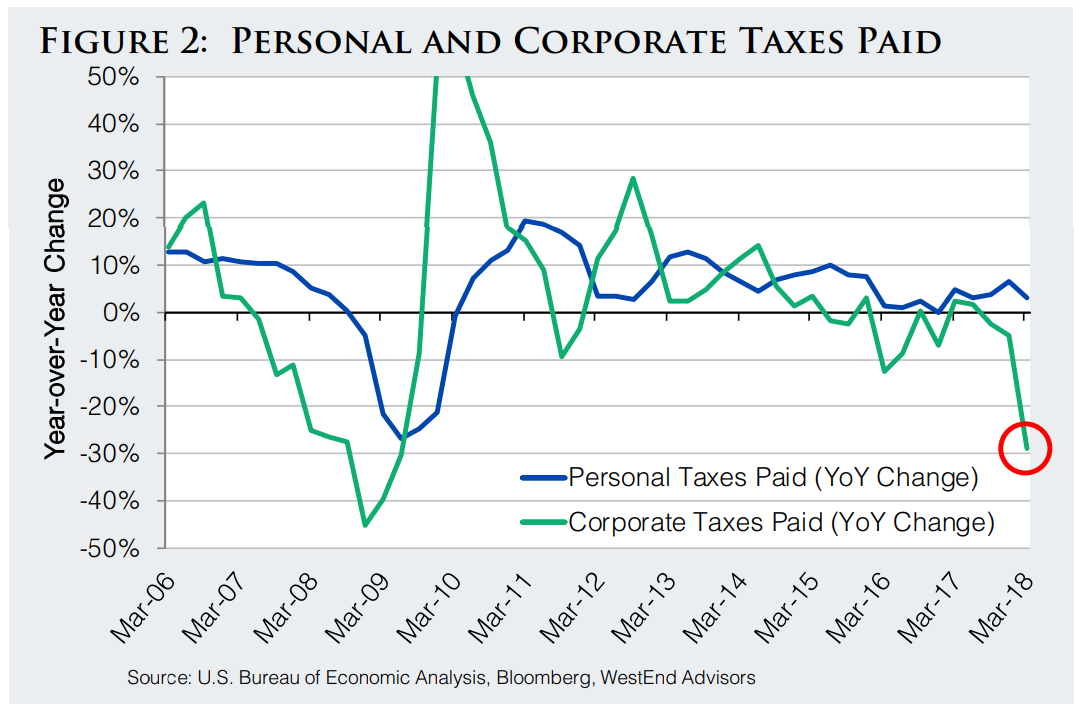 While we have a positive view toward the U.S. economy and markets, we always assess potential risks to our outlook. Trade policy is a key risk in the current political environment. In our view, tariffs are effectively a tax paid by U.S. corporations and consumers in the form of higher costs for goods and services.

Thus, the tariffs already enacted or announced by the U.S. could offset some of the positive growth effects of recent tax reform.

Retaliatory tariffs from other nations could weigh on U.S. exports, adding to the case against sustained stronger growth here and abroad. Still, the risk of a full-blown and prolonged trade war remains small in our view. We believe that the administration (despite its rhetoric) will not want to risk the economic and political consequences of a broad trade war.

U.S. Equity Positioning: Given our U.S. outlook, we continue to avoid the most economically-sensitive U.S. sectors, such as Energy, Materials, and Industrials. In contrast, we currently favor U.S. equity sectors with a mix of positive cyclical and secular earnings growth drivers. For example, Information Technology should benefit from capital spending in a moderate economic growth environment, as well as from ongoing migrations to cloud computing, digital advertising, and electronic payments. Health Care and consumer-related sectors are additional examples of sectors that we see as attractive.

We also believe maintaining exposure to less economically-sensitive U.S. sectors is warranted, given the progress made thus far in the economic cycle, and we reallocated within our strategies’ less economically-sensitive U.S. equity exposures during Q2. Specifically, a shift in market conditions presented an opportunity, in our view, to move back to a material overweight of U.S. Consumer Staples. From early 2017 through late Q2, valuations for the Consumer Staples Sector declined materially as sentiment turned overly negative toward the sector.