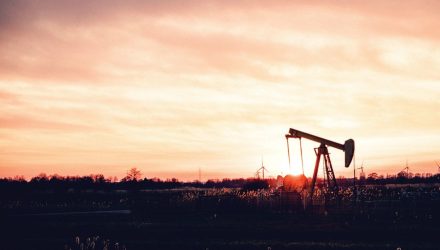 Momentum Investors Will Be Buying Energy And Materials In A Year

The global economy is changing, yet many investors seem to have static portfolios. The ongoing popularity of the so-called “secular growers” despite the stocks’ meaningful underperformance as the economy has started to change indicates investors generally have not understood the powerful secular macroeconomic forces fueling those stocks. Whereas most investors have focused on companies’ supposed unique business models, the reality is macro trends were the predominant catalyst for longer-term outperformance.

Secular stories change as the macroeconomy changes, but investors typically are hesitant to welcome change and tend to cling to yesterday’s story. Today, for example, investors seem to downplay the ongoing change in leadership as simply a short-lived value cycle in hopes the old leadership returns.

History shows changes in market leadership tend to last longer than investors expect and if the recent cyclical/value/small cap leadership does indeed last, momentum investors could be buying energy, materials, and other value/cyclical investments in a year or so.

In a 1956 edition of the Harvard Business Review, Peter Bernstein (no relation) wrote a landmark essay called “Growth Companies vs. Growth Stocks” in which he pointed out investors mistakenly use the two terms interchangeably. He outlined there are significant differences between growth companies and growth stocks.

Growth stocks are those stocks with superior growth rates because the companies successfully respond to something going on in the macroeconomy. Bernstein suggested, if many companies in the same industry or sector were outperforming then they likely are growth stocks as the entire industry or sector was being propelled by economic events. In other words, the macroeconomic backdrop fuels a growth stock’s success. The example he used, given

that it was 1956, was steel stocks. The economic environment was fueling the performance of the entire steel industry leading investors to characterize steel stocks as growth, but the macroeconomy and not the companies themselves was primarily responsible for the success of these companies.

Growth companies, on the other hand, are companies that change the economy rather than react to it. Unlike his description of growth stocks in which an entire industry or sector outperformed, Bernstein described a growth company as one that puts its competition out of business. The entire sector doesn’t outperform; only one company outperforms because it is destroying all the other companies in its sector.

Today’s growth investors seem to have confused growth stocks for growth companies. The median number of holdings among five popular “disruptor” ETFs is 68 stocks with a median 57% of assets in their top 3 industries. The broad number of stocks within a narrow industry concentration suggests these companies aren’t true disrupting growth companies, but rather are growth stocks being influenced as a group by macroeconomic trends.

We have repeatedly emphasized the post-2008 period of sub-5% nominal GDP growth gave rise to a secular period of long-duration growth stocks. If the subpar nominal growth period comes to an end, which it appears to be in the process of doing, then it seems unrealistic to expect the same growth stocks to continue their run.

Some growth investors have tried to defend owning Technology and other “secular” growth shares by claiming value cycles are short-lived and untradeable. However, that flatly isn’t true. Recent research by BofA US Equity & Quant Strategy shows the average length of a value cycle is 33 months and the current one is only 8 months old. Perhaps more important, five modern day value cycles have lasted more than 6 years! (See Chart 1)

Strongly reflecting investor’ sentiment, we are asked all the time what inning the value rally might be in as investors are fearful to invest in what they perceive to be a short period of value outperformance. However, we’ve never once been asked in what inning is the technology/innovation/disruptor theme. 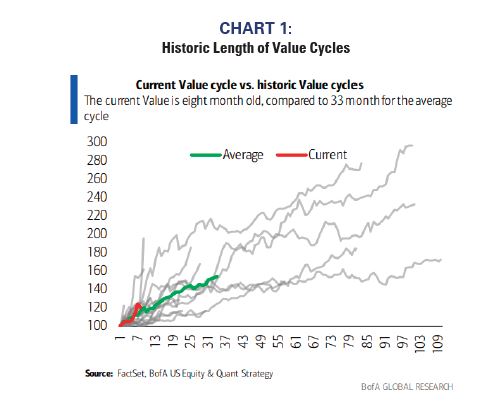 Our early-1990s research showed value tends to outperform growth when profits cycles accelerate. The current quarter is only the first quarter in a profits expansion we see lasting at least for a year more. Because of the easy comparisons versus 2020’s pandemic, one should expect growth to slow to more normal rates, but such an earnings pattern is typical at the beginning of major cycles. (See Chart 2) 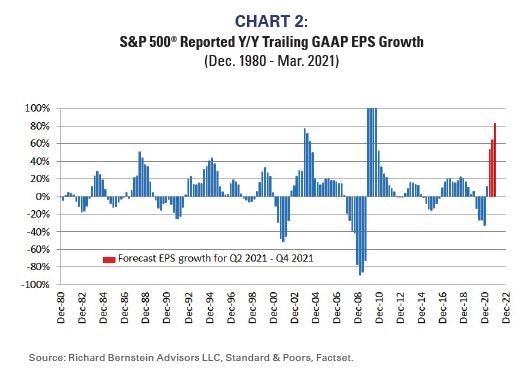 Analyst coverage is a standard measure of “neglect” and can be an interesting gauge of investor enthusiasm because sell-side firms tend to follow companies whose stocks they can sell and about which there are investment banking opportunities. In other words, hot stocks with high valuations/cheap cost of capital tend to be followed more frequently than are out-of-favor stocks with more conservative valuations.

Chart 3 (courtesy of BofA) highlights the relative performance of neglected stocks. The strategy was outperforming during periods in which the line is rising within the chart. The strategy didn’t perform well during very odd periods (like the aftermath of the S&L Crisis or during the Tech Bubble) and there have been regulatory changes that could have affected historical performance (i.e., Reg FD), but a strategy based on stocks with less analyst coverage has generally tended to outperform over the last 20 years. 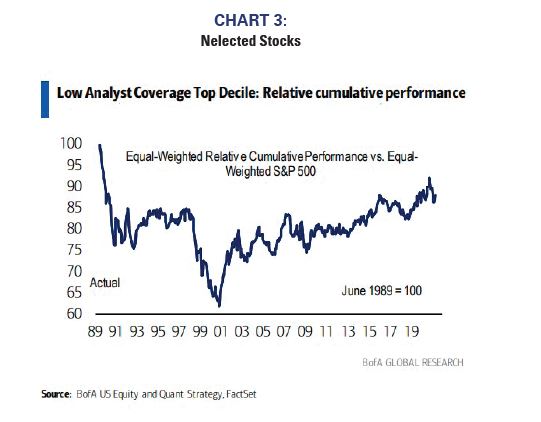 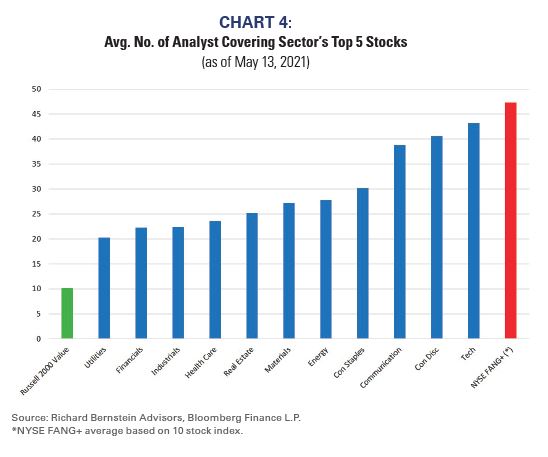 Fed policies scream for a change in leadership

The secular growth stocks were largely fueled by an extended period of slow nominal growth, but recent Fed policy suggests that era might soon end. The real Fed Funds rate is now decidedly negative and real rates were more negative only twice in the last 50 years. (see Chart 5)

The first period was in the early-1970s. The Fed allowed the real rate to remain negative for a relatively long period, and that loose monetary policy helped exacerbate the 1970s inflation spiral. The second period was during the early-1980s. The Fed realized their mistake and quickly tightened to an extent never seen before or after. 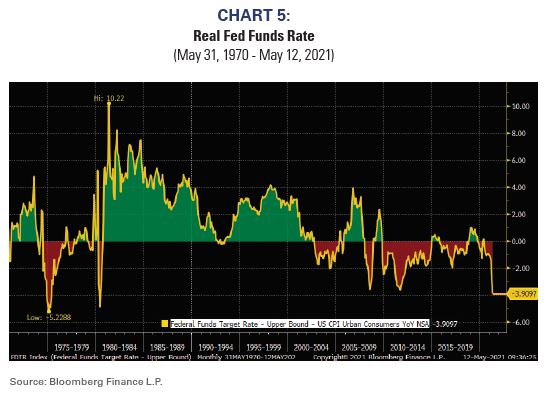 The real Fed Funds rate was also negative for an extended period of time after 2008 and it did not ignite accelerating nominal growth or inflation. There are several differences between that earlier period and today. First, fiscal policy was actually contractionary for several years as Washington’s political battles led to the “sequester” that constrained government spending. Second, money growth post-2008 was less than half of today’s historically high growth rate. Third, banks were considerably less willing to lend in 2008 than they are today as reflected in the Fed’s Survey of Senior Lending Officers. Because of these differences, we are not sure a comparison to the post-2008 experience is a good one.

The Fed has broadly stated it is willing to tolerate more inflation, so the 1980s example seems irrelevant. To clarify, we are not suggesting that the current Fed is fueling the early stages of a 1970s inflation spiral, but it might nonetheless be prudent to err on the side of more inflation rather than less.

As we’ve repeatedly pointed out, the fundamentals already strongly support the shift in leadership from tech/innovation/disruption to cyclical/pro-inflation that appears to be underway. Investors generally have remained skeptical though, as they do at the beginning of most leadership shifts. Old habits die hard. 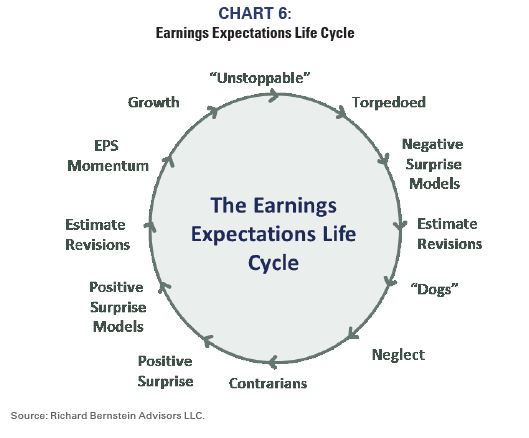 If the Earnings Expectations Life Cycle theory holds, and we see no reason why it shouldn’t, then momentum investors will likely be buying energy, materials, industrials, and the like in about a year.

Nothing contained herein constitutes tax, legal, insurance or investment advice, or the recommendation of or an offer to sell, or the solicitation of an offer to buy or invest in any investment product, vehicle, service or instrument. Such an offer or solicitation may only be made by delivery to a prospective investor of formal offering materials, including subscription or account documents or forms, which include detailed discussions of the terms of the respective product, vehicle, service or instrument, including the principal risk factors that might impact such a purchase or investment, and which should be reviewed carefully by any such investor before making the decision to invest. RBA information may include statements concerning financial market trends and/or individual stocks, and are based on current market conditions, which will fluctuate and may be superseded by subsequent market events or for other reasons. Historic market trends are not reliable indicators of actual future market behavior or future performance of any particular investment which may differ materially,

and should not be relied upon as such. The investment strategy and broad themes discussed herein may be inappropriate for investors depending on their specific investment objectives and financial situation. Information contained in the material has been obtained from sources believed to be reliable, but not guaranteed. You should note that the materials are provided “as is” without any express or implied warranties. Past performance is not a guarantee of future results. All investments involve a degree of risk, including the risk of loss. No part of RBA’s materials may be reproduced in any form, or referred to in any other publication, without express written permission from RBA. Links to appearances and articles by Richard Bernstein, whether in the press, on television or otherwise, are provided for informational purposes only and in no way should be considered a recommendation of any particular investment product, vehicle, service or instrument or the rendering of investment advice, which must always be evaluated by a prospective investor in consultation with his or her own financial adviser and in light of his or her own circumstances,

including the investor’s investment horizon, appetite for risk, and ability to withstand a potential loss

© Copyright 2021 Richard Bernstein Advisors LLC. All rights reserved. PAST PERFORMANCE IS NO GUARANTEE OF FUTURE RESULTS