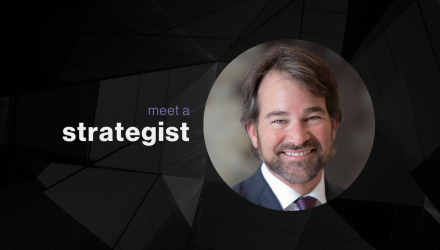 Meet a Strategist is a weekly feature where Evan Harp talks to different strategists about how their firms are responding to the current moment. This week, he sat down with Gary Fullam, the CIO of GLOBALT Investments.

Gary Fullam: A better question would be, “What’s not keeping them up at night?” Let’s see: we have inflation, impending recession, ultra Fed hawkishness, market volatility, war, and politics. There is plenty out there that’s got people worried, and justifiably so.

Oftentimes, when there’s the most uncertainty, there can be the most opportunity within markets. So we kind of look at it from both sides of why are people afraid, why is positioning where it is within the markets? And then look for inflection points, those variables, and the sentiment and narrative around those variables.

Evan Harp: Do you have any recent changes in your allocations?

Gary Fullam: We haven’t done a lot of reallocation. What I’ll tell you is that, coming into 2022, we had already — after the post-COVID run, we had begun de-risking portfolios. What that means to us is we were, and are, holding significantly above-normal cash levels. We have no small-cap in the equity portion of our portfolios. We have no credit. All our fixed income instruments are Treasuries. We have had for a couple of years now, a minimum allowable allocation to international equities within our ETF portfolios. So, as I said, we came into this year on pretty conservative footing, and what we’re doing now is looking for opportunities to potentially add risk to portfolios here.

Evan Harp: What do you think of the market right now?

Gary Fullam: We think that we are in a bottoming process, and that can take a significant amount of time. We think we hit the market lows in June. But still, there’s a lot of wood to chop. There’s a very aggressive Fed, and we’re going to see more rate hikes tomorrow. Then the fear is, what’s going on with inflation? How much further are they going to go, and at what risk to the economy, not only here, but globally?

We have a very global focus. And one of the things we’re seeing is that the higher rates are having not only an impact on our economy, but they’re putting a lot of pressure on global economies. Also considering that much of the debt, globally, is dollar-denominated debt and we have a dollar that’s been marching higher every day. So, you’re seeing a lot of these countries get a double whammy on their equity performance. I mean, it’s weakening their economy. Their currencies are falling, and their markets are falling. It has not been a good picture there.

We think the Fed is close. We have thought for a while that the inflationary forces that are in the economy are relatively transitory. If you look at inflation expectations in the coming years, they’re pretty well contained, it’s the short-term view of what each inflation print is going to be. That is really causing consternation for both the Fed and market participants. So we think we’re getting closer to the end of this tightening cycle. We do not think this is a ’70s-style, self-perpetuating inflation. We think it’s a perfect storm of stimulus, of bottlenecks, of things that are going on in the labor force that have not brought people back to work to the level that we would have liked to see, and everybody would like to see, to relieve some of the wage pressure within the jobs market.

It’s been an environment where it’s taking a long time for this to percolate through, but as we’ve noted, commodity markets have come down significantly. That’s a headwind for inflation. We think it’s a matter of time before we get back down to more manageable numbers on the inflation front.

From the intermediate-term standpoint, we’re getting more bullish in here, although our work, which is really a weigh-the-evidence approach — we have quantitative models, we have technical models, and we have macro fundamental work that we do. We’re looking for the weight of the evidence to shift positive there, and it’s still very murky. So we’re staying in this watch-and-wait, neutral environment for our portfolios. Get out to see what comes next. One of our big mottos is to win by not losing. So we like to wait until we get a fatter pitch that’s justified by our weigh-the-evidence approach.

Evan Harp: Are there any ETFs you want to highlight?

So, that’s not that exciting right now. But one of the two areas we’re looking at, and I know it’s one of the things that makes people sick to their stomach and both of these have had a really rough time — one is China.

China, for all its problems, one thing that’s going on in China is they’re loosening policy while the rest of the world is tightening monetary conditions. We look for inflections in the data, and we’re starting to see one of the ETFs is the KraneShares CSI China Internet ETF (KWEB), which is basically the high flyers of Chinese technology and social media. That ETF topped out in in February of 2021 and has been in a protracted bear market since then. It bottomed in March of this year, whereas our market did not bottom so far, anyway, until June. So it begs the question, “Is that a potential?” At least for us, we have strategic plays, and then sometimes we’ll play things tactically. Then sometimes things turn from tactical to strategic if the story continues to play out. So that’s one we would highlight. Like I said, we don’t own it, but we’re interested.

The other one is the gold miners, the VanEck Gold Miners ETF (GDX). We own gold, gold is less volatile than the miners, normally by a factor of three to one. They’ve literally been decimated. Again, higher real rates and a strong dollar are not their friend. But we think we’re setting up for the dollar to at least peak, it doesn’t have to plunge for these things to do better. Meanwhile, you’ve got these things down almost 50% from their highs.

So those are a couple of ideas that we’re looking at very closely. As I said, we we’ve yet to pull the trigger on anything.

Gary Fullam: I probably have a lot of answers to that. But I think that one of the main ones is that we were an early adopter of ETF strategies. We were literally one of the first back in the early 2000s. It was a pretty easy transition to us as a turnkey global asset allocation approach, using ETFs, and because we started the firm in 1990 with a global view. So this kind of product really fits into the way that we’ve been looking at the world from the beginning of the firm, 30-some odd years ago. We’ve had an investment team that’s been in place for a very, very long time, and we think that’s a unique factor as well.