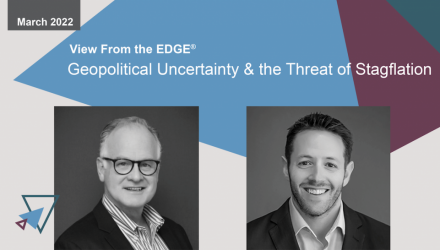 U.S. Equities: Russia’s invasion of Ukraine has dominated the news and the global capital markets and helped push U.S. equity indices into correction territory (down over 10% since the start of the year) by the end of February. The war has exacerbated already elevated inflationary pressures, particularly in the energy (oil and gas) and food sectors. In addition, widening credit spreads and negative investor psychology could also exert further downward pressure on the U.S. equity market. After such a steep decline over the past two-plus weeks, there is also a chance for a “snap back” rally to emerge. With inflation at levels not seen for decades, the Fed is expected to raise short-term interest rates during the upcoming FOMC meeting on March 16.

European Equities: The conflict between Russia and Ukraine has once again brought war to Europe and adds to already elevated inflationary pressure, directly threatening Europe’s energy supplies. Therefore, our research suggests a more negative current outlook for European equities. However, since Russia’s foray into Ukraine, European equities have fallen to near oversold conditions. Moreover, since they are also considered undervalued, European equities could become attractive if there were signs of progress towards a negotiated settlement between Russia and Ukraine.

Japanese Equities: Credit spreads have continued to widen in Japan while investor psychology has turned more negative. While the overall model outlook for Japanese equities is negative, there is potential for a short-term rebound from an oversold condition.

Chinese Equities: As seen in other regions, widening high yield credit spreads alongside negative investor psychology continue to weigh on the outlook for Chinese equities.

Indian Equities: Like most equity markets, India too appears to be a victim of the war in Ukraine. While several economic factors are still quite favorable on Indian equities, investor psychology measures cast doubt in the near term. Moreover, concerns over spiking commodity prices may further challenge Indian equities in the intermediate-term as well since India relies to such a large extent on imported oil. Overall the outlook for India equities is neutral though it remains near an inflection point and could be poised for a rebound should energy prices stabilize.

Inflationary pressures and negative real interest rates continue to pose a threat to the income earned from owning bonds. At the same time, rising interest rates weigh on the value of bond holdings through price depreciation. As a result, 3EDGE research continues to favor U.S. Treasury Inflation-Protected Securities (TIPS) and U.S. Treasury Floating Rate Securities, which typically perform well in an inflationary and rising rate environment. However, the outlook for Credit remains negative as yields remain below the inflation rate, and the risk of continued credit spread widening would most likely reduce the principal value of corporate debt.

Gold: The Russian invasion of Ukraine has heightened geopolitical uncertainty, and gold has benefitted from its status as a safe-haven asset. In addition, investors have increased their outlook for inflation expectations causing real rates to decline, also directly benefiting gold. Gold remains attractive in the intermediate and longer-term as inflationary pressures continue to build, and while the Fed’s response to addressing inflationary pressures has been particularly slow. Therefore, the outlook is more favorable for gold.

Commodities: Commodities, like gold, have benefitted from the upward price pressure on energy and food as a result of the Russia Ukraine war and declining real interest rates. As a result, the outlook for commodities is positive but highly sensitive to changing conditions related to the war in Ukraine.