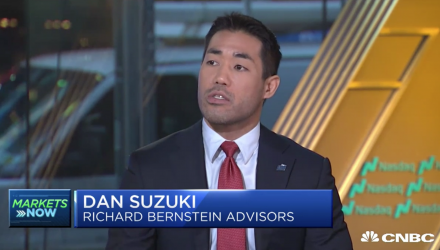 Suzuki began by sharing his thoughts on the over 300-point drop of the Dow on Thursday, October 18. “This whole sell-off to me has been a bit of an anomaly in the fact that it came on the back of good news,” said Suzuki. Suzuki also mentioned that the decline seemed indicative of a skittish market looking to sell, with the sell-off not seeming to be driven by fundamentals.

Gunzberg stated that in the wake of the U.S. and China trade tensions, small-caps may suffer more than large-cap companies. “Small caps can’t keep pace with the large caps, so the concern, we call it bearish divergence, is when the large-caps are making new highs, but small caps are falling, and that means that there might be some economic weakness,” she said.

See the full segment on CNBC below: