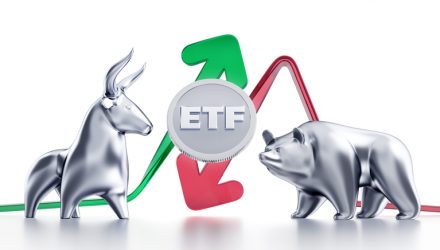 The fee war is officially over. Well, at least I want it to be. Not that lower fees aren’t a great thing for investors, but they seem to have become the only thing (as I’ve written about before). However, I think there is some evidence that fees — insomuch as measured by expense ratios — are losing their singular status and that important ETF metrics are being accounted for by the masses. I may be grasping at straws, but I believe the little things still matter in ETF investing.

As evidenced by the chart below, flows into ETFs are still robust. But they are increasingly being directed into the lowest-cost funds. Is that it? Are investors just blindly buying whatever is cheapest? Many observers may believe that’s the case, but I don’t think it’s the whole story. Let’s explore. 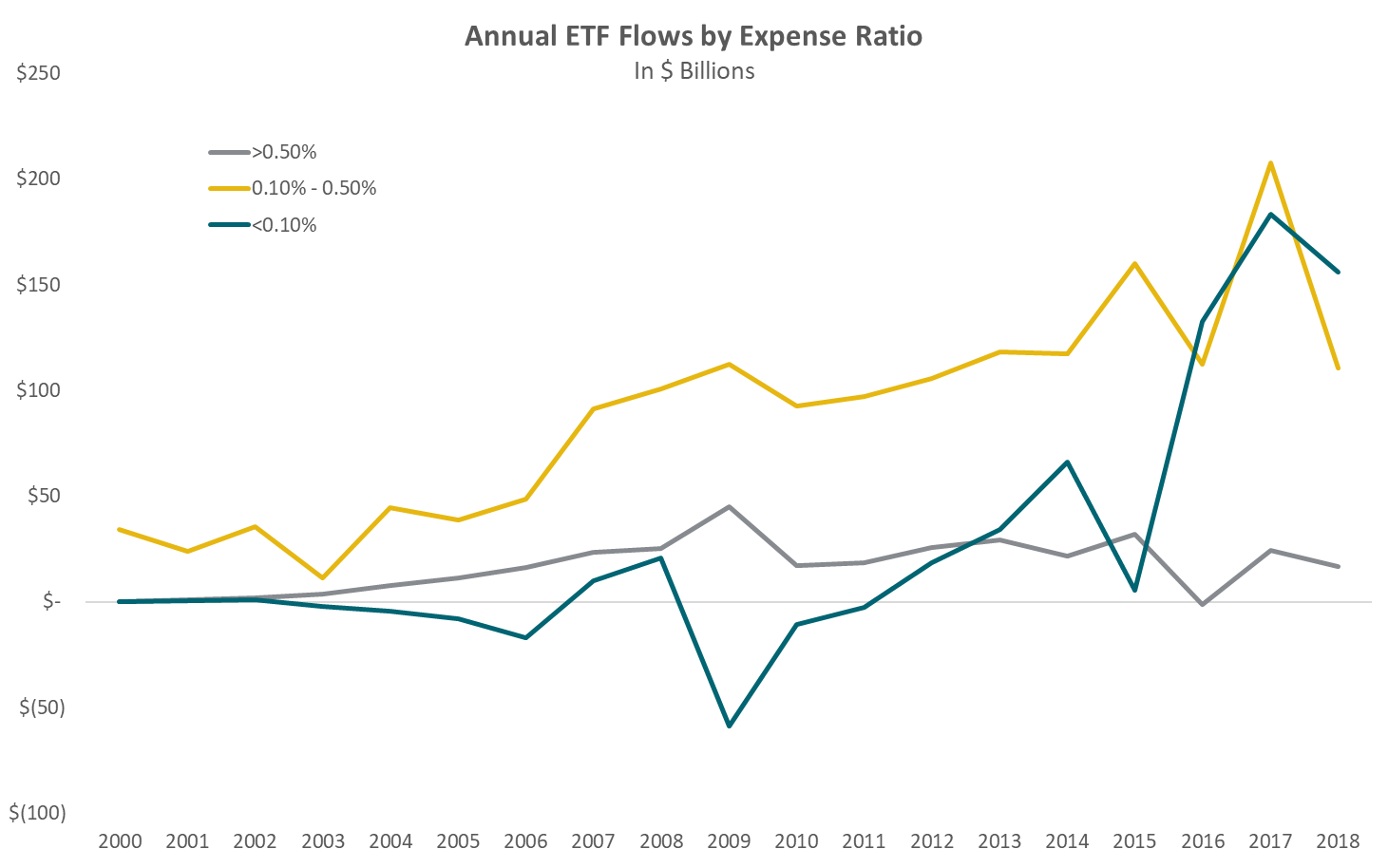 Expense ratios get all the headlines, but there’s a lot more to the cost of ownership. For many smaller investors, commissions can make a big impact. Commissions have come down over time, but they tend to move slower than expense ratios. The going rate seems to be $5-$7 per trade. Not bad. But on a $15,000 trade, that’s 3-5bps, which nearly eradicates any of the fee differences that I’m displaying here. For many people adding money to their accounts, commission-free ETFs are all the rage. Brokerage platforms have been expanding their lineups at accelerating rates.

The importance of ETF availability on specific broker/dealer platforms and approved lists is huge, but so is the aforementioned commission-free-ETF list. Often, there is only one ticker available per major category, which can be a huge benefit to that ticker. For example, one platform has more than five emerging market bond ETFs available commission free but only two broad U.S. market ETFs!

The “build it and they will come” mentality doesn’t seem to play out in the ETF space. Surely, early movers have typically had an advantage, but firms with name recognition and marketing power can dominate categories. How many investors know that there are other S&P 500 ETFs besides SPY and IVV? And cheaper, broader options? The ETF universe is not nearly the size of the number of mutual funds, but at nearly 3,000 options, it still takes work for smaller and newer issuers to get in front of ETF users.

We don’t think about this much when talking about broad, low-cost ETFs, but the ability for an ETF to track its index, not distribute capital gains, and efficiently manage corporate actions are among several important factors for the largest institutional investors. 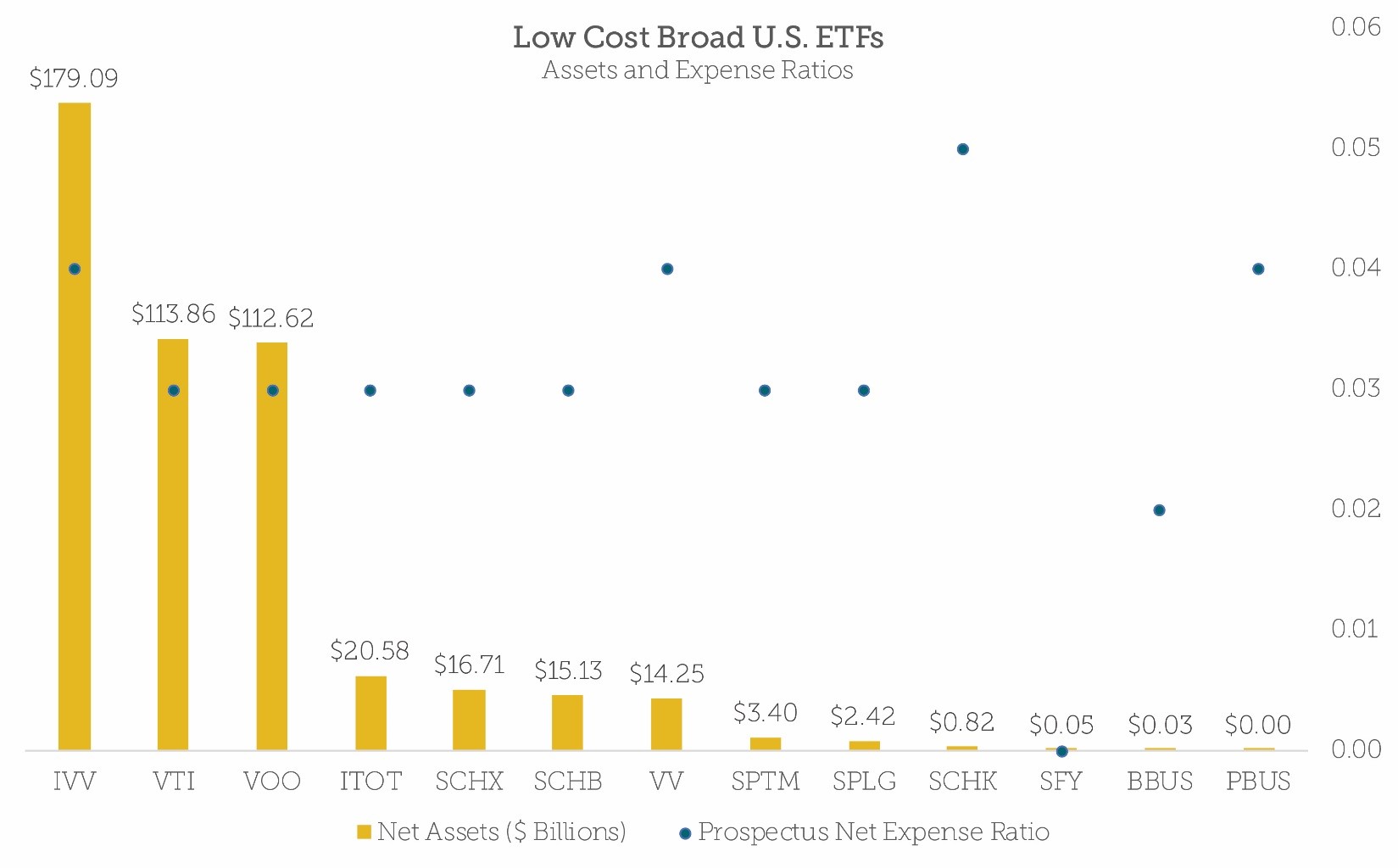 A survey of the current U.S. broad market ETF space plays out a lot of these ideas. IVV, the largest ETF outside of SPY, is commission free on at least three different platforms; it has a 4 bps expense ratio, a robust securities lending program, the marketing power of BlackRock behind it, and it has tracked its index (which is also the way-too-widely followed S&P 500 Index) very well over the years. It’s almost unfair! On the other hand, SoFi’s recently launched Select 500 ETF is free for at least the first year. However, it is commission free only via SoFi’s platform, does not have a securities lending program, is sponsored by a firm not (yet) known for investing, and happens to track a not-quite version of the S&P 500 (with a growth tilt). The difference is $180 billion.

But it is likely a chicken-or-egg conversation. Some of the newer entrants haven’t had the time to gain assets from the big funds, and with the market run, switching costs can be high for taxable investors. That being said, there are a number of little things in ETF investing, not just fees, that still matter, including many more I have not mentioned here: market impact costs, share price impact and influence, etc. As providers continue to scrap for a piece of the passive pie, the behemoths still have advantages that extend beyond expenses.

Grant Engelbart is Director of Research and Senior Portfolio Manager at CLS Investments, a participant in the ETF Strategist Channel.

This information is prepared for general information only.  Information contained herein is derived from sources we believe to be reliable, however, we do not represent that this information is complete or accurate and it should not be relied upon as such.  All opinions expressed herein are subject to change without notice. The graphs and charts contained in this work are for informational purposes only.  No graph or chart should be regarded as a guide to investing.