It’s Time for the Fed to Taper, Despite the Soft Jobs Report

During the depths of the COVID pandemic economic crisis, the U.S. Federal Reserve (Fed) committed to a series of supportive monetary policies that included bond purchases. Right now, the markets are very focused on potential changes in Fed policy including tapering, or the cessation of these bond purchases. The expectation is that over time the Fed will stop buying bonds. More specifically, the Fed will not sell these bonds, rather just stop buying more and let their current inventory mature.

We think that the Fed might be overdue in initiating tapering, and it’s probably a good idea for the Fed to backout of these markets. During the depths of the crisis, we thought that the Fed’s broad array of policy support was needed to help the economy and the markets recover. However, now that the U.S. economy is well on its way to a sustained recovery, we have an excess of liquidity adding to inflationary pressures. Despite the week August employment report, the labor market is well on its way to a full recovery, so we think that the Fed should further reduce its policy support and mitigate the chances of negative unintended consequences from buying bonds and injecting even more liquidity into the financial system.

THE ECONOMIC RECOVERY HAS MOMENTUM

Most of the economic indicators that we track, such as monetary conditions and business surveys, point to solid economic growth in the coming months and continuing into 2022.

The size of the U.S. economy, as measured by nominal GDP (NGDP) should rise to its pre-COVID trend growth path in the coming six to nine months as economic growth momentum continues. This momentum suggests that the Fed’s role in the recovery has been a success. 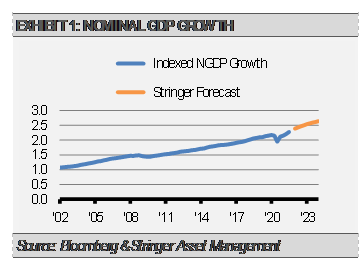 The Fed’s response to the crisis is unlike anything seen before. Continued stimulus, especially through bond purchases, has led to enormous liquidity (M2) growth. Though some “transitory” inflationary pressures, such as the rate of increase in used cars, may be easing, other longer-term pressures, such as wages and rents, are just beginning to build. 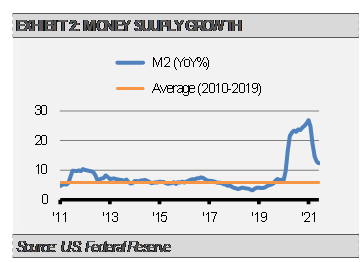 THE U.S. HAS MORE JOB OPENINGS THAN EVER BEFORE 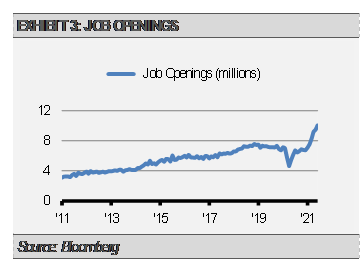 The data shows that the Fed’s supportive policies have been successful in helping the U.S. economy get back on track. Economic growth has been strong, and the number of open jobs has never been greater. Meanwhile, inflationary pressures continue to build. As a result, we think the Fed should back away from the markets satisfied in the knowledge that they did all they could do for the economy. It is now time for the economy to evolve on its own.