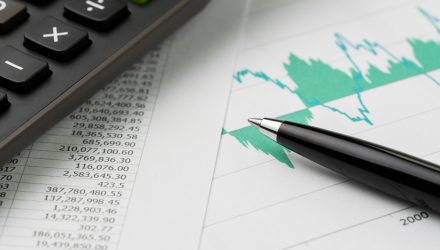 Investing in the New Volatility Regime

We think the recent stock market volatility is likely to persist and that equity prices will ultimately move higher. Volatility is a sign of uncertainty and the market is telling us that it is less confident in the prices of assets. Importantly, this uncertainty does not clear itself up quickly and volatility tends to linger. Essentially, one day’s wider price swing tends to endure into the following days and weeks. As the following exhibit illustrates, periods of high volatility persist until periods of lower volatility take over, and this cycle repeats over time. 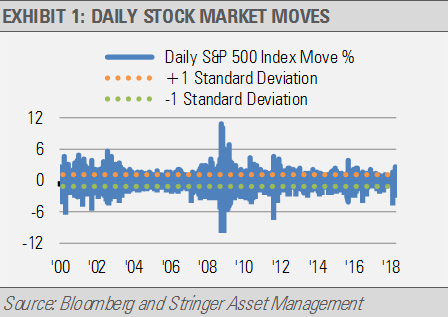 In addition to headlines about trade wars and interest rate moves, our signals suggest that the recent volatility in the market has a lot to do with the decline in the pace of global economic growth (exhibit 2). Though we think that engaging in a trade war would be a significant U.S. policy blunder, the risk and impact to the U.S. should be relatively muted. While trade is clearly beneficial, it is not as impactful to the U.S. economy as it is for many other countries. For example, trade as a percentage of GDP for the U.S. is roughly half the global average (exhibit 3). 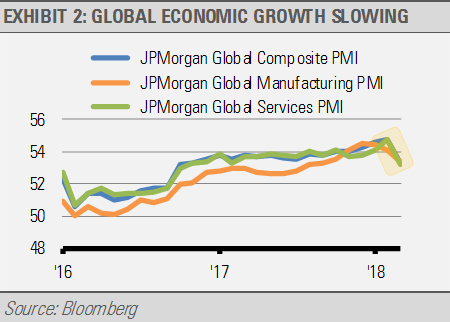 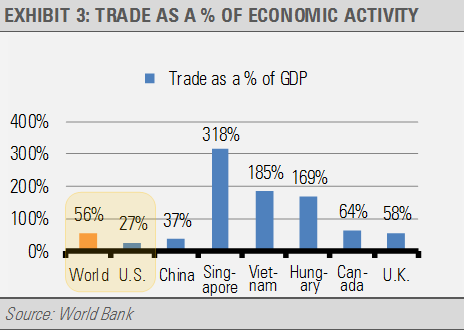 At the end of the day, economic growth, even sluggish growth, leads to higher revenues and earnings, which can support higher equity prices. Furthermore, we do not think interest rates will move significantly higher in the near-term.

In high volatility regimes like the one we are currently in, investors should look towards lower volatility strategies and investments. We think nominal GDP (NGDP) growth, which had been moving at an impressive rate in late 2017, will likely decelerate nearer to its long-term trend of roughly 4% (2% real GDP plus 2% inflation) over the next six to 18 months. Given the long-term relationship between NGDP and the 10-year Treasury yield, we expect that softer NGDP growth will move the 10-year Treasury yield lower to approximately 2.5% (exhibit 4). 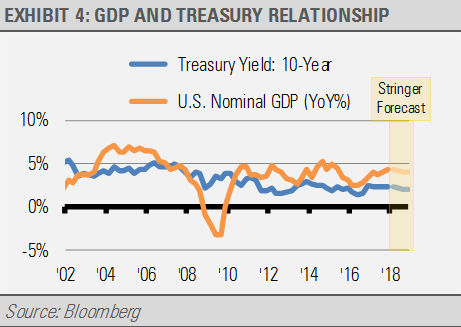 Notwithstanding the market volatility, we think the recent equity market declines, combined with increased earnings expectations, make both domestic and foreign equities more attractive than they were at the start of 2018. For example, analysts have increased their forward 12-month earnings expectations for the S&P 500 Index’s companies by more than 16% since the beginning of the year. Additionally, in light of the recent equity market declines, the forward price-to-earnings (PE) ratio of the S&P 500 Index has decreased more than 15%.

Finally, we expanded our bias in favor of value equities compared to growth equities during the past quarter. We noted last fall that the relative outperformance of U.S. growth stocks over value had become extreme by historical standards and that outperformance has now expanded globally to foreign developed and emerging markets. We have long been believers in reversion to the mean, which leads us to think that the gap between the investment performance of value stocks will eventually catch up to growth stocks.

As a result, we widened our value bias to developed and emerging market equities, in addition to the domestic overweight that we emphasized last fall. Exhibit 5 shows the rolling 12-month return differential between the growth style and the value style in the U.S. as well as the developed and emerging markets. The growth style of investing rarely outperforms the value style by the magnitude we have seen recently. We think there is a strong probability that the value style will outperform over the next twelve months. 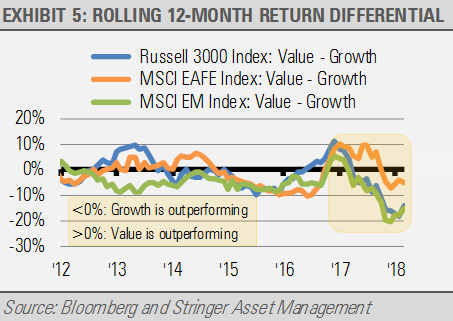