Impacts of Russia’s Invasion of Ukraine

On Thursday, February 24th, Russian President Vladimir Putin launched its invasion of Ukraine introducing a new uncertainty to markets. Globally, Russia makes up a small portion of the economy as its weight in the MSCI All Country World ETF (ACWI) is 0.21%. The exposure of US equities to Russia is small. According to JP Morgan Research, US companies have low direct exposure to both Russia (0.6% for Russell 1000) and Ukraine (0.1%). However, Europe is more exposed to the risks of the conflict as they are more economically linked with the countries.

Countries around the world have imposed sanctions on Russia ranging from prohibiting exports of specific goods to restricting operations of financial institutions. As both Russia and Ukraine are responsible for a vast amount of the world’s exports of oil, natural gas, and wheat, both energy and commodity prices have risen significantly due to trade related sanctions. This is likely to further trouble already constrained supply chains, as well as the shutdowns of auto factories in Germany, limited supplies for the steel industry in Japan, and the closure of various air and sea trade routes per a WSJ article. Moreover, the US, EU, UK, and Canada have banned select Russian banks from SWIFT, the interbank system that allows easy transfer of money across borders. This will likely disconnect Russia from the international financial system, effectively halting international payments such as those for oil and gas production which make up over 40% of the country’s revenues. The ban likely caused the Russian ruble to decline nearly 30% on the morning of Monday, February 28th, and the closing of the Russian stock market that day.

In our view, inflation will remain a bigger threat to the economy. Increased prices and additional supply chain difficulties brought about by the invasion may amplify inflation in the US which is already at multi-decade highs. Refer to the chart below for near record highs of oil prices and five-year breakeven inflation expectations.

Other Potential Risks of the Russia-Ukraine Conflict

As the US imposes sanctions on Russia, there is concern that Russia will retaliate with cyberattacks similar to those used on Ukraine. Consequently, cybersecurity stocks Palo Alto Networks (PANW) and Crowdstrike Holdings (CRWD) jumped more than 14% on the day of the invasion. Additionally, there is fear of additional geopolitical risk that China could use the conflict as an opportunity to invade Taiwan. China’s contribution to the global economy is far larger and more impactful, hence, any invasion of Taiwan and subsequent sanctions could have a greater impact to the global economy. Contagion risk, the spread of an economic crisis across the interconnected financial system, can also be seen as a potential threat as some Russian banks could face failure.

What Happened with Prior Geopolitical Tensions?

According to JP Morgan, over the last 12 geopolitical, macro volatile events that have occurred from 1973 through 2014, the average duration of a market selloff was 12 days. The average selloff is approximately -6.5%, with the average recovery taking about 137 days (see table below). 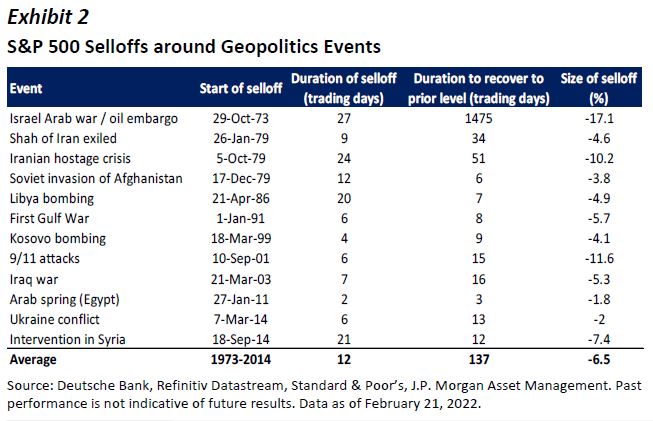 The next FOMC Meeting will be held on March 15th and March 16th, where the Fed is expected to begin hiking rates. Less than two weeks prior to today, CME data indicated that traders were pricing in a 96% chance of a 50bps rate hike at the upcoming meeting. But after events of the Russia-Ukraine crisis, the probability has shifted to a 91% chance of a 25bps increase as of February 24th. Despite multi-decade high levels of inflation with January year over year PPI and CPI at 9.7% and 7.5%, respectively, investors believe the Fed may not raise rates as aggressively at the March meeting as it could aim to take caution with respect to geopolitical uncertainty. However, many economists still see the rate hike path largely unchanged for the remainder of 2022 and beyond given the strength of the US economy and persistent inflationary pressures.

Since 1960, the US has experienced 8 recessions. As the chart below shows, inflation declined considerably in each of these instances given the subsequent decline in aggregate demand and decreasing prices. 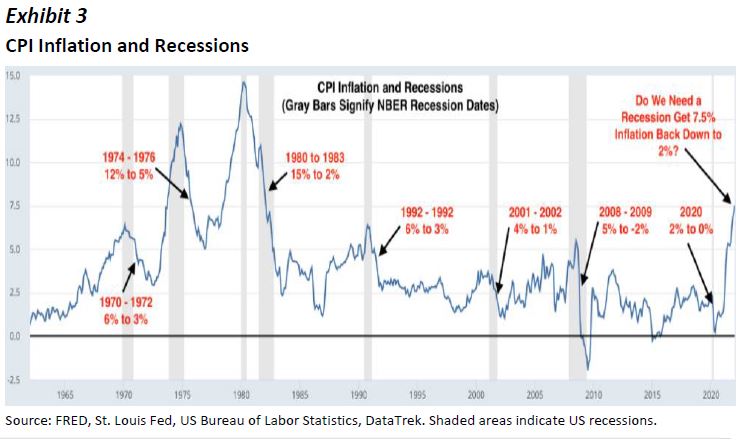