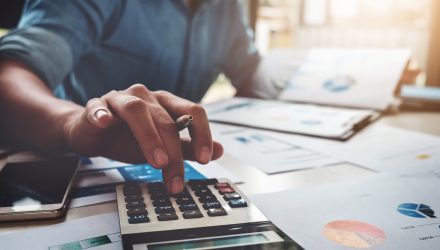 By Lawrence Carrel, ETFs for the Long Run

A return of capital is typically considered a less than desirable form of distribution from an ETF because it is drawn from shareholder equity rather than a fund’s income. However, if used correctly, paying returns of capital can be a useful strategy to minimize an investor’s taxes on the total return earned by an investment.

People who rely upon their investment portfolios to fund consumption can enhance the tax-efficiency of their spending dollar by consuming returns of capital and indefinitely deferring the recognition of capital gains.

DIFFERENCE BETWEEN A RETURN OF CAPITAL AND A TRADITIONAL DIVIDEND

Traditional dividends are distributions to shareholders that an ETF pays out of its income. In contrast, returns of capital are paid out of an ETF’s shareholder equity, or NAV. In simple terms, paying shareholders a return of capital is the equivalent of returning some or all of their investment to them.

The dividends of most real estate investment trusts (REITs) and Master Limited Partnerships (MLPs) contain a component of return of capital due to accounting depreciation, a non-cash charge that reduces taxable income without reducing the amount of cash flow that a REIT or MLP has available for distribution. However, in operating corporations that pay out dividends on a regular schedule, paying returns of capital is typically viewed as undesirable.

In the case of an ETF, however, a sophisticated fund manager can use return of capital to lower the taxes an investor incurs on the total return generated by the ETF.

With the exception of QDI, which is taxed at a reduced rate, traditional dividends from stocks and interest paid from fixed-income securities are taxed at the investor’s ordinary tax rate. In 2018, ordinary income tax brackets range from 10% to 37%, depending on the individual’s annual income. Short-term capital gains, or profits on investments held less than one year, are also taxed at the investor’s ordinary tax rate.

However, long-term capital gains, the profits on investments held longer than one year, are taxed at lower rates, either 0%, 15%, or 20%, depending on the investor’s taxable income and filing status.

Returns of capital are not taxed at all because they aren’t income or profits from the investment, but rather a return of an investor’s own money.

For instance, if an investor bought 1,000 shares of an ETF called ABC Fund at $100 per share, the initial capital investment would be $100,000. If the investment paid
an annual income distribution of $7,000. That income would be taxed at the investor’s ordinary tax rate.

However, assume that $7,000 distribution was a combination of $3,500 income from the investment, either dividends or interest, and $3,500 return of capital. The investor would only pay taxes on the $3,500 of income because return of capital isn’t taxed. This would lower the amount of the distribution that is taxable in one way or another by 50%. The total distribution is still the same, but the tax consequences differ. Furthermore, by favoring an investment strategy that can produce capital growth using a structure than minimizes realized capital gains, the investor can defer taxes on capital growth and even, potentially, avoid such taxes completely.

Distributions that include a return of capital reduce an investor’s cost basis in the investment.

While funds generally must distribute investment income annually, ABC Fund has some flexibility in choosing how to fund its $7,000 distribution for the period. One approach would be to sell its appreciated securities and distribute $3,500 in investment income and $3,500 in capital gains to investors. With this approach, the entire distribution would be taxable either as income or capital gains. Alternatively, ABC Fund could elect to retain its appreciated securities and instead distribute $3,500 in investment income and a $3,500 return of capital (either from cash on hand or by selling unappreciated securities). With the latter approach, the investor would not pay tax on the $3,500 return of capital but would instead experience a reduction in his cost basis from $100,000 to $96,500.