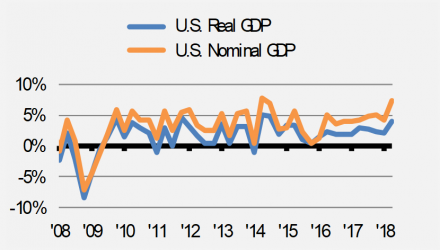 Our economic models and analysis suggest that the pace of economic growth in the U.S. has peaked or will soon peak. The latest readings of real and nominal GDP growth (we prefer to focus on nominal GDP due to its inclusion of inflation and its relationship with corporate revenue growth) came in near the high end of the post financial crisis recovery range (exhibit 1). However, we expect both measures of economic growth to abate in the quarters ahead for a variety of reasons.

First, some of the recent drivers of economic growth have already begun to slow. For example, soybean shipments surged ahead of the newly enacted tariffs, which accounted for a larger proportion of exports during the second quarter (exhibit 2). Going forward we can expect these exports to decline as tariffs take effect.

Additionally, the residual effects from strength in the U.S. dollar will likely weigh on exports in the near-term, especially as the dollar’s strength continues. As Fed policy tightens with rate increases, it creates a headwind to domestic growth while the positive effects from fiscal stimulus, such as corporate tax cuts, fade.

Finally, we think the collective yawn by the bond market in response to faster GDP growth confirms this view. If accelerating growth were to persist, long-term yields and market-based inflation expectations should have risen further. The bond market seems to be suggesting that the burst in GDP growth will diminish in the coming months.

Although these events do not sound particularly constructive, they may foretell some positive things to come. A slowing in the pace of economic growth is relatively good news in our opinion because we think that it will cause the Fed to scale back its planned interest rate hikes before they cause the yield curve (the difference between long-term and short-term interest rates) to invert, choke off liquidity and maybe even cause a recession next year. We expect the Fed to raise interest rates one or two more times and then pause, which should allow slow growth to continue.

Slowing economic growth may cause some market volatility or even a correction, but we think the real risk to equities is a recession. In a slow growth environment, many companies can still grow revenues and earnings, which can support higher stock prices. A recession typically causes large declines in earnings with stock prices following suit. Our work suggests that will not be the case.

There are some strong fundamental trends that point to continued, albeit slower, economic growth. A few of the more significant trends that we see include an increase in commercial and industrial lending (exhibit 5). The rise in lending suggests to us that businesses are beginning to find growth opportunities worth investing in and banks are willing to lend capital to finance these opportunities.

Additionally, personal income continues to slowly but steadily grow, up almost 5% since last year, along with personal spending (exhibit 6). Finally, we expect jobs creation in the U.S. to remain above the approximately 100,000 new jobs per month that is required to keep pace with the estimated growth rate of the U.S. labor force. This should provide a positive feedback loop for consumer income and spending.