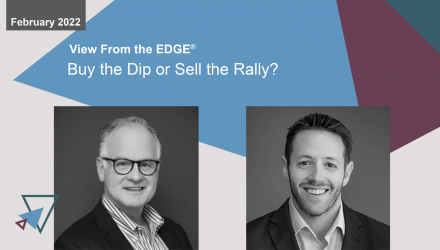 February View from the EDGE® 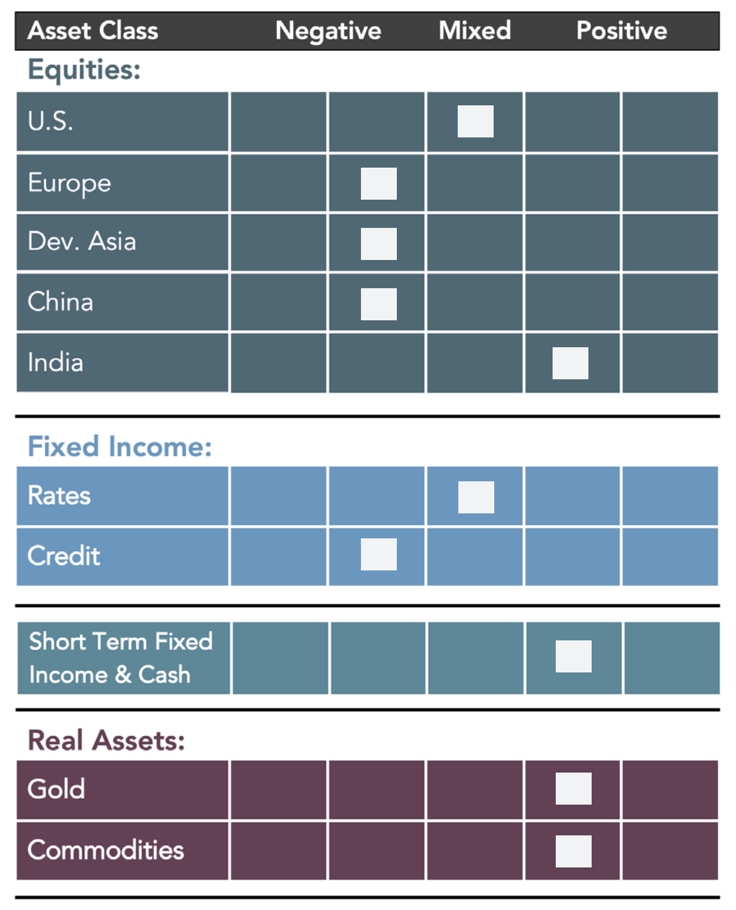 ▶ U.S. Equities: Despite the drop in equity prices during January, the S&P 500 Index of predominately large-cap growth stocks remains highly overvalued by our measure. The Federal Reserve Board recently announced that it will add further monetary stimulus until at least March by leaving its Fed Funds Rate near zero and by continuing to expand its balance sheet, providing further support to the stock market and the economy in the short term. However, the Fed did raise the prospect of tightening its policy for a yet-to-be-determined period beginning no earlier than March should inflation remain elevated and unemployment remain low. While our measures of the yield curve slope are sufficiently steep to be supportive of the equity market, widening credit spreads may serve as an early warning sign of an economic slowdown. In addition, investor psychology has turned less positive given the recent break in the market’s persistent uptrend since March of 2020, also weighing on the outlook for U.S. equities. As inflation has risen far higher than expected and well beyond current interest rate levels, the potential for an abrupt shift in policy by the Fed to a stronger inflation-fighting response could trigger a more serious equity market correction. In an environment of rising rates, higher quality and/or value-oriented equities may outperform.

▶ European Equities: Inflationary pressure remains elevated across Europe as the latest inflation print climbed to a record high. Concerns over the potential for the ECB to take more aggressive action in response to inflationary pressures than market participants currently anticipate could prove to be a headwind for European equities. In addition, continued widening of investment grade and high yield credit spreads is indicative of concerns. Overall, a negative outlook remains.

▶ Japanese Equities: The potential to regain a more positive outlook exists as we are seeing a tightening of credit spreads in the region. However, indicators of investor psychology show a more negative outlook short-term. On balance this combination of factors contribute to an overall negative outlook for Japanese equities in the short term.

▶ Indian Equities: Recent concerns over the impacts from a widening of the TED Spread in India (a measure of available liquidity in a financial system measured as the difference between the interest rate that banks charge one another and the interest rate on short-term, risk-free government debt) may have subsided. In addition, the yield curve measure for the region has continued to steepen which bodes well for the prospects of future growth. Overall the outlook for India equities remains positive.

▶ Bonds: Inflationary pressures and negative real interest rates continue to pose a threat to the income earned from owning bonds, while at the same time rising interest rates weigh on the value of bond holdings through price depreciation. Research continues to favor U.S. Treasury Inflation-Protected Securities (TIPS) as well as U.S. Treasury Floating Rate Securities, which may perform well in an inflationary and rising rate environment.

▶ Credit: The outlook for Credit remains negative as the risk of continued credit spread widening would most likely reduce the principal value of corporate debt.

▶ Gold: The recent uptick in nominal interest rates was largely matched by a similar rise in real rates, a negative factor for gold in the near term. However, Gold remains attractive long-term and is supported by a continuation of the current negative real interest rate environment (nominal interest rates minus expected inflation). Rising geopolitical uncertainty and inflationary pressures globally highlight gold’s role within a diversified portfolio as a hedge. Overall, a positive outlook remains.

▶ Commodities: Commodities remain relatively undervalued in our model research and attractive over the longer term. Measures of economic growth suggest a positive outlook; however, concerns from widening credit spreads in the U.S. may be a headwind shorter-term. Overall, commodities maintain a positive outlook.