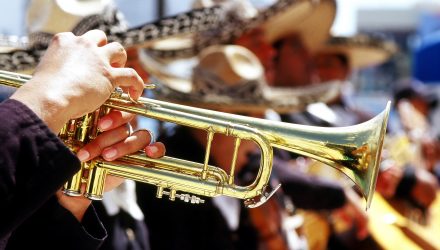 This Saturday is May 5th, the Mexican holiday Cinco de Mayo. While it is a relatively minor holiday in Mexico, Cinco de Mayo has evolved into a commemoration of Mexican culture and heritage in the US, particularly in areas with large Mexican-American populations.

Surprising to most Americans, Cinco de Mayo is not Mexico’s Independence Day like our Fourth of July. The holiday celebrates the Mexican army’s 1862 victory over France at the Battle of Puebla during the Franco-Mexican War. Sticking with our holiday theme lately, we want to take a closer look at the five ETFs focused on Mexico and the two ETFs focused on France.

EWW provides broad exposure to the Mexican stock market. Since the Mexican market is very top heavy, EWW reconfigures market cap weightings slightly to stay RIC-compliant. It’s worth noting that EWW has almost no technology, energy or utilities stocks, as the companies in these sectors are privately owned or run by the government. It’s top three sectors in order are Financials, Consumer Non-Cyclicals, and Telecommunications.

The Direxion Daily MSCI Mexico Bull 3X Shares (MEXX) offers daily leveraged 3X exposure to a broad, market- cap-weighted index of Mexican firms. It is the only ETF on this list that is a Smart Beta, Leverage ETF.

Here are the other three Mexico-focused ETFs and their AUM:

Now on the French side, there are only two ETFs: EWQ and FLFR.

EWQ is the best pure play for exposure to the French market. It is the French version of EWW, though not as large asset-wise. The iShares MSCI France Index Fund tracks a market-cap-weighted index of French companies and covers the top 85% of French companies by market cap. EWQ holds a diverse portfolio of French large and mid-caps with an exceptionally market-like array of sector weights. It’s top three sectors are Industrials, Consumer Cyclicals, and Financials in that order.

It has $875 Million in AUM, an expense ratio of 0.49%, and average trading volume of 1,083,314 shares. Fun Fact: Other than having the same inception date as EWW and 16 other iShares MSCI products, EWQ is the tenth largest in AUM of that group. In fact, EWJ (iShares MSCI Japan ETF) is the largest and has more AUM than the next 16 combined (approximately 21 million).

The other France focused ETF is a new comer from Franklin with only $2.64 Million of AUM. This is part of Franklin’s approach to entering the ETF industry through low cost alternatives and embrace the client alignment growth factors.

As stated before, EWW was arguably the best performing ETF of all-time from its inception in 1996 until 2007.