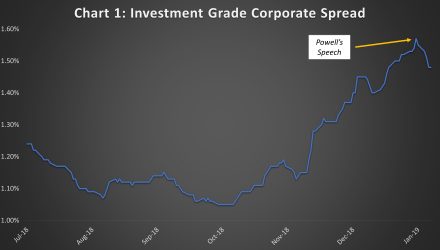 While a further rally in risk assets and compression in credit spread will require a follow-through by the Fed as a well as cooling of trade tensions, the Fed has done its part to quell market volatility to start off 2019. One sector that has had a particularly strong rebound is Energy.

Just a few weeks later, on January 4, Powell spoke on a panel with former Fed Chairs Janet Yellen and Ben Bernanke at the American Economic Association conference. His remarks reflected an about-face from his December press conference.

Notably, Powell stressed flexibility in Fed policy: “We’re always prepared to shift the stance of policy and to shift it significantly if necessary;” and, we’re: “Listening sensitively to the message that markets are sending;” and on the potential to pause its rate hike as well as balance sheet runoff, he said: “We will be prepared to adjust policy quickly and flexibly and to use all of our tools to support the economy.” The Fed then bolstered its messaging around a hiking pause this week when speeches from Fed officials Charles Evans, Loretta Meester, and Eric Rosengren echoed a similar tone.

Financial stability and markets are now squarely and explicitly in the Fed’s crosshairs, and a dour market mood turned around on a dime. Credit markets have snapped back. Investment grade corporate spreads, which peaked on January 3, the day before Powell’s speech, have compressed by 9 basis points (Chart 1). More notably, high-yield credit spreads have fallen by 92 basis points, which retraces most of December’s move (Chart 2)!

The Energy sector has seen a particularly strong rebound in both spreads and sentiment, bolstered by a rebound in the benchmark West Texas Intermediate Crude Oil price from a low of $42.53 on December 24, 2018 to $52.02 on January 11, 2019.